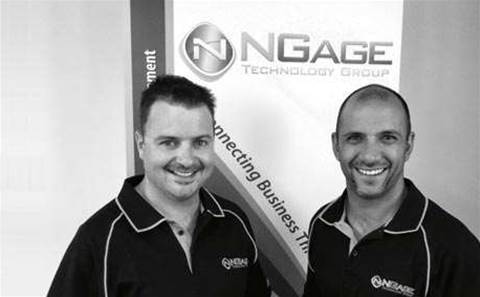 “The way we won business was around supply of hardware,” says co-founder Jarrod Bloomfield. “A lot of businesses got out of supplying hardware and went down the services route – like every integrator. Instead, we concentrated on supplying hardware.”

Services may not have been the initial focus; but service was. Bloomfield says NGage operates under the ‘triple S’ theory: speed, simplicity and support. “We had a massive focus on customer service,” he adds.

The company was established in 2011 by Bloomfield’s business partner, Brent Valle, who remains the company’s business manager. It wasn’t until the start of 2012 that Bloomfield left his job at Southern Cross Computer Systems, where he had worked for nearly a decade, to join NGage as client services director.

The duo brought complementary skills. Valle came from the distributor world, having worked at global Lenovo and IBM distie IT XChange. Bloomfield’s background ensured the company has strong credentials selling to end users.

The company’s main offering comprises implementation of hardware, from client devices right up to servers, storage and virtualisation projects.

There’s no single vertical for NGage. Projects tend to be for private companies of 500 seats and above. Bloomfield says that education and government make up a lesser part of revenue, adding that both sectors are very price-driven. “Education is very tough. There are panels. Although we did just get endorsed onto a government panel.”

Bloomfield, 28, says that after the first year of razor sharp focus on product, the company has since started growing its services business. In 2012-13, services accounted for 20 percent of its turnover, with 50 percent from hardware and 30 percent from software.

For a company so focused on product, vendors are, of course, of huge significance. Bloomfield points to Lenovo and IBM as two brands of particular importance for NGage.

He says he had a “pretty good run with Lenovo” while at SCCS, while Valle worked with the PC maker on the distribution side. “We also had some good product knowledge of IBM,” adds Bloomfield.

One of the projects that helped NGage clinch the top spot in the Fast50 was based around Lenovo technology. “We did a pretty large client desktop rollout to a mid-tier bank in Melbourne.”

But the team haven’t been afraid to branch out into disruptive technology either. Only a few months ago, NGage become one of the first resellers in the country to sign up with flash company Pure Storage.

“I was looking at flash a year ago and was waiting for Pure Storage to come to Australia,” says Bloomfield. “We have partnered with them and we’re getting a lot of traction.”

He says the vendor is attracting a lot of interest across the channel, particularly due to its leadership credentials. “Pure Storage has a good leadership team. It has a host of big names from IT, especially in the υ States... In Australia, everyone you talk to in enterprise IT knows it is going towards flash in the data centre so any flash vendor coming out, people will be interested,” says Bloomfield.

Representing a disruptive vendor should also help NGage stand out from the competition, he adds. “What we didn’t want to do is go and partner with one of the current vendors and be a ‘me-too’. You go and sell EMC or NetApp – they have 15 to 20 partners in Melbourne and it is hard to differentiate yourself.”

Another vendor of note is F5 Networks. Bloomfield says that in 2012-13, NGage did “a fair bit” of application security work for financial service and tele-communications customers.

Considering the abundance of IT resellers in the channel, you might assume it would take a genius idea to propel a start-up to the top of the CRN Fast50, but Bloomfield says there were “no tricks to it”.

“It was just hard work and a few things falling our way,” he adds.

If anything, it was good old-fashioned business strategy that saw the company explode over its first few years of operation. Bloomfield keeps going back to that same story – service. Before launch, Valle and Bloomfield did their market research, trying to find out where they could find a niche. What they kept hearing was there was a lack of really solid customer service.

“Every customer said, ‘We deal with Company A and they don’t get in touch until we need to buy something’. We focus on Account Management 101,” says Bloomfield.

The first challenge for NGage was to create a name for itself. A bit of clever marketing helped get the word out. Bloomfield credits partner Valle as the marketing brains of the operation. First, NGage went out and bought some lists to do some “cold marketing”, says Bloomfield.

“For our first marketing campaign, we posted out a bottle opener, then a lemon, and then a Corona on three different days. We got a meeting out of that,” says Bloomfield.

Another campaign was a simple piece of market research. They sent out a voucher to prospects offering two free movie tickets if they answered a survey with questions about their infrastructure, vendors and refresh cycles. It was an inexpensive way to find out which clients to chase, says Bloomfield.

NGage also runs an ongoing customer initiative that has been particularly successful.

Every reseller will be familiar with the kinds of incentive programs run by vendors and disties. The team at NGage turned this idea on its head by creating a loyalty system for end users. The NGage Partner Program encourages end users to sign up as Gold, Platinum or Diamond partners.

All members of the program receive benefits such as access to NGage’s Rapid Replacement Program, and Partner Portal to track and trace invoices, and an invitation to NGage’s ‘End of Financial Year Partner Appreciation Gala’. Platinum members also receive invitations to other partner events as well as a rebate rewards program. The top level, Diamond, attracts $20,000 worth of benefits, such as free express shipping in Melbourne, monthly face-to-face strategy sessions and a guaranteed ticket to the AFL Grand Final.

(As a barometer of the program’s success, the allocation of 15 places in the Diamond program is currently exhausted.)

The combination of customer service and innovative marketing has helped win customers. Bloomfield points out that at last year’s race day, NGage Technology Group attracted 20 customers. A year later, 35 attended. The company says that 70 percent of business in 2012-13 came from new customers.

Starting a company takes guts. NGage has struck success early, but it wasn’t a walk in the park, says Bloomfield. “It is definitely not easy. You have to be prepared for a lot of hard work and rejection.”

He says one of the biggest obstacles as a new face is convincing customers of your merits, especially when they have entrenched relationships with existing suppliers. “Customers will tell you they are sick of dealing with someone, but they are averse to change. There is also the building of your relationship in terms of credit. We have been pretty good with credit. We work with a few good disties and they come to the party.”

The company’s most important distie is Synnex, followed by Dicker Data, then Ingram Micro Australia.

Bloomfield expects the good times to keep on going. “We have exceeded where we wanted to be. We anticipate we will grow somewhere around 100-odd percent again.”