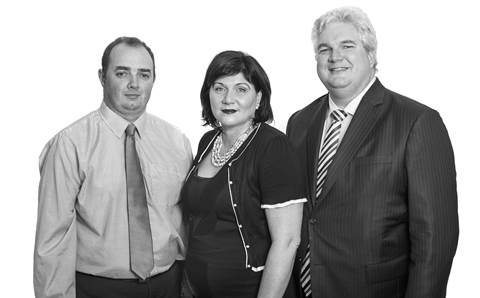 If you had to hazard a guess at the only two service providers in the country fully certified by the Australian Signals Directorate, you might get at least one of them – $200 million publicly listed hosting provider Macquarie Telecom.

What about the other one? Step forward Sliced Tech, the No.1 fastest-growing company in this year’s CRN Fast50.

This Canberra-based company may only be nudging five years old, but it has built up a trusted reputation among government agencies, including ASD certifications for both cloud and gateway. The trustmarks aren’t just for the trophy cabinet: Sliced Tech is turning government know-how into a thriving business. Its 192.03 percent growth in the 2015 financial year is no fluke.

Government work makes up 75 percent of the company’s $3.9 million annual turnover, and it’s been like that since day one. Government buyers are a demanding bunch, but they also have a pleasant tendency of sticking around, as Sliced Tech’s founders learned early on. After Jason McClure, his wife Julie, and chief technology officer Daniel Hoffman formed the new entity in early 2011, their first client was a mobile app developer. The second was a government agency. One of those customers is no longer operating. No prizes for guessing which.

Success in the government IT circus requires jumping through more than a few hoops. Sliced Tech has turned this challenge into a core business principle. “Early on, we realised we had a niche play in the compliance space, particularly with government, so we focused on building that reputation,” says chief executive Jason McClure.

Right from the get-go, Sliced Tech thought it could do things differently. At the time, Hoffman was working elsewhere in the channel, and was fed up with what he saw as an outdated approach to cloud. “I was working at a number of IT service providers specialising in cloud enablement and found myself continually constrained by internal policy and politics around how we should use cloud and ways of deploying things. I was feeling like I was being held back and that’s where the discussion [with the other founders] came from.”

McClure continues, “At the time, in late 2010, a lot of companies were treating cloud as being web hosting or a marketing term to sell products. They weren’t delivering cloud – self-service, pay as you go. There were companies calling virtualisation ‘cloud’, for example. We saw an opportunity for cloud to become a real enabler... if you deliver true cloud.”

Giving it a go

The McClures and Hoffman had known one another for years. “Daniel started working for me in 2000, and on and off we have bumped into each other, Canberra being a big country town,” says McClure. “Julie and Daniel have worked alongside each other in the same organisation. As a result, we gained a level of trust with each other and thought we could do business together.” So, with a mix of “bravado and arrogance, we decided hey, let’s give it a go – what the heck”, he adds.

Hoffman may be CTO of a 20-staff company in a “big country town” but he has sky-high aspirations for what Sliced Tech should deliver. “Cloud has a distinct undertone of building applications that are instantly scalable, fault resilient and can truly scale to the size of the application. Twitter and Facebook are good examples – they don’t have guys installing infrastructure. They scale based on load, based on end users, not in the server infrastructure model where applications can only support 4,000 users then we need to build another virtual or physical machine.”

Sliced Tech focuses on the foundation layers of infrastructure-as-a-service and platform-as-a-service. “We will do integration around hybrid and private cloud, but when it comes to delivering SaaS, we will generally partner,” says Hoffman. “We are quite comfortable up to the virtual server level. If someone wants Dynamics, while we are a Microsoft partner, we know that is not our core business. We can patch a Dynamics server but we will bring in a Dynamics partner to deliver that niche service.”

A multitude of products

The company’s partnering mentality goes beyond subcontracting. Sliced Tech has built out its own channel. “We enable tier ones and tier twos who resell our product,” says McClure. The partnerships are largely confidential but McClure was able to name one – a little IT services outfit called Fujitsu.

Sliced Tech is strictly vendor agnostic. It uses hardware providers such as NetApp and Dell in its own private cloud, but “Daniel is very passionate about not getting locked into a brand”, says McClure. The same applies to the hypervisor.

Asked which vendors are getting it right in cloud, Hoffman laughs that “they are all getting it wrong”.

“But to clarify, every vendor is getting something right and that is the brilliance of this sector. That is why we don’t have all our eggs in one basket. We have strategic alliances with a number of vendors.”

One vendor partner that both McClure and Hoffman single out for praise is Fortinet. The security company is “very much in alignment with what I am doing and how I am doing it”, says Hoffman. “Their product ecosystem is growing and more and more focused on cloud delivery. Fortinet would be my pick for my most strategic partner.”

McClure says Fortinet doesn’t ignore Sliced Tech because they’re small. “They are seeing us as a partner, not by the size of the cheques we write.” It’s a smart move by a vendor – given the speed of growth at Sliced Tech, as those cheques are bound to get bigger.

In fact, as the company has expanded and the size of the deals have grown, the directors have been stubborn about sticking to the same business model that drove their initial success. Just like cloud uses standard building blocks, Sliced Tech takes the same view on process, says McClure. “We have a business coach and he drills into us all the time – it is not about how many zeroes, it is about how you make the decisions. We have become very disciplined; regardless of the size of the deal, the way we qualify the sales is the same, the way we deliver is the same.”

Where most vendors continue to fail is around licensing models, says McClure. Customers are easily sold on the true cloud model of month-to-month billing with no contract lock-in. But software suppliers continue to demand annual or three-year perpetual licence payments.

Hoffman agrees. “They all struggle with that concept. I understand with physical [hardware], it is only fair to pay for them upfront, but even with simple things like server infrastructure, you have add-ons like management and payment platforms where you have to buy the software upfront. My driver is to align the product choice with the models that my customers want to pay me, which is month-to-month.”