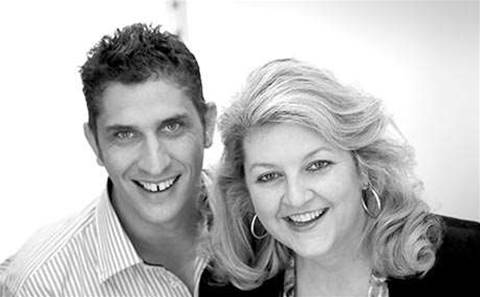 With a goal of $50 million in annualised sales volume in the next five years from its channel, Vonex has come a long way in the past five years. Several years ago, it was battling to gain credibility with carriers while its chief technology officer was run off his feet trying to support 100 customers.

Today, it has more than 10,000 people using its PBX. Its technology is deployed in the US, Australia and Asia. And it’s in 63 countries, carrying millions of calls a month. It has high-profile clients including Toyota, Ray White, RSPCA and Ted’s Camera’s. Others include Auto Masters, Freedom Pools, Wittner Shoes and government agencies.

It is at a channel nexus, as a technology aggregator and wholesaler which had its beginnings in a prior business servicing end users and has continued to grow by acquiring resellers.

Founders Brydie McKee and Angus Parker met after McKee left the banking world to set up a financial services business. She was impressed with the work Parker was doing, developing a hosted PBX platform that would become the jewel in the Vonex crown. They created a business on the hosted PBX platform, based on advice from IT consultants Atrico. McKee mentored Parker and they established two cloud voice and data service companies.

They crossed the tiered divide by crafting a partner network. They sold the data hosting business and established Vonex in 2009, marketing a white-labelled hosted PBX to ISPs and telecoms providers. The next year, it entered the US.

The management has not been afraid to veer from their original path several times. It’s also an example of how a channel player can use its own intellectual property to transform its business. It is also a story of the benefits of partnering with other partners: one of Vonex’s key partners is Telegate, a NSW-based company that is No.28 in this year’s CRN Fast50.

The company has continued to innovate, in part driven by necessity. Lacking adequate support resources, an automated PBX provisioning tool was created to make it easier to provision services for customers.   It was called Automated Manage­ment and Provisioning Tool, or AMPT.

“To get out onsite to install a PBX was creating a bottleneck,” McKee says. “We just couldn’t survive, having all the large infrastructure, with resellers going out and selling one PBX a month. Angus was on the phone providing support continuously. This was not working, it was not a scalable business model.”

This decision proved fruitful, helping Vonex expand beyond carriers and ISPs to the likes of PABX installers, IT providers and smaller telecommunications providers.

“We were opening up another revenue stream for IT guys that had never touched telecommunications,” McKee says. “They shied away because they didn’t have the smarts or tech capability for IP voice.

“That’s why we’ve grown so rapidly because we’ve simplified it and made it really scalable. It’s live within minutes. It’s really amazed a lot of people within our industry.”

The company’s strength lies in multi-site deployments, she says. Customers with plenty of branch offices facing an expensive job connecting everyone to a PBX are especially suited to Vonex’s capabilities. Customers include clubs, franchises and entrepreneurs working from home.

And it means Vonex is no longer dependent on white-label partners to sell and market its service. Adding iTrinity brought billing and helpdesk capabilities as well as business and residential PSTN, mobile and ADSL. The services are expected to be rebranded under the Vonex name this year. Vonex takes care of the infrastructure, billing, helpdesk and customer support.

The acquisition meant it had more control over how its product was packaged and sold and could dictate the price point better with a set RRP.

In Australia, the company plans to have state partner managers covering Victoria, New South Wales, Queensland and Western Australia, with a goal of recruiting 500 dealers.

Breaking out and cracking in

McKee points out the journey has not been without its struggles – not least, gaining brand recognition. She says it was difficult gaining credibility with carriers.

“We didn’t use any of the traditional technologies. We are not Broadsoft, we aren’t Asterisk. We are a proprietary platform made up of 10 existing technologies and bound together by our own technology to create the PBX stack,” she says.

Asked to identity factors in the company’s success, she points to how Vonex encourages internal product development.

“Our culture is very much around innovation and scalable products and technology. We give the guys all the room in the world to explore and expand. A lot of them take on little projects.

“We’ve got a collaborative culture.”

She also credits key figures in Vonex’s evolution. One is co-founder and chief technology officer Parker, who she speaks of in glowing terms and with whom she has a “great bond and a great friendship”.

Others include the company’s chief financial officer Greg King, new chief commercial officer Matt Fahey and chief operating officer Dallas Thomas. She also says her esteem extends to other past and present engineers, administrators, technicians and support staff that make up the team.

The company has a team culture, McKee says.

“I’m about putting round pegs in round holes. It’s about lining the right people in up in the right job holes, and making sure they’re passionate about what they do,” she says.

“We’re a football team and you run when it’s your turn with the ball, and when you’re at the end of the road you pass it off to the next person. You get rid of a lot of ego.

“People put up their hands and say ‘it’s not my strength’. The company moves forwards a lot quicker, rather than people hiding in the corner and being fearful someone will have a go at them because they haven’t achieved.”

The next phase will see Vonex combine its iTrinity operations under its own banner – a new website is being rolled out and the iTrinity brand will eventually disappear. The company has also started referring to its hosted voice solution as a “next-generation net phone” rather than hosted PBX.

And it plans to go into app development, with work based on its voice engine, although McKee was reluctant to reveal too much about these plans.

Vonex is also seeking an injection of capital for marketing and sales.

Global roaming is a key opportunity. The company sees a future opportunity in users wanting cheaper options as well as one device to “do everything”.