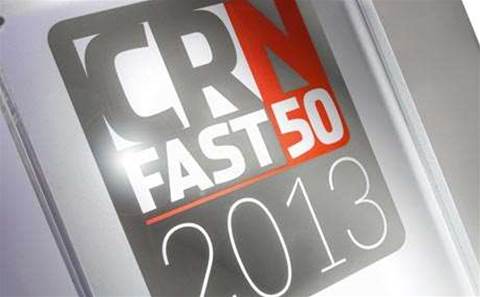 It’s a common talking point in the channel: the push away from hardware and towards services. It is backed up by the data in this year’s Fast50. In 2013 – and for the first time since the Fast50 began – services provided the majority of revenues to the Fast50. Between 2009 and 2011, the dial barely moved on services growth and the relativities between hardware, software and services remained largely static. But the emergence of cloud computing in recent years has broken the nexus. Services clearly dominate.

Another reason for the smaller overall revenue of this year’s Fast50 compared with previous years is the increased importance of cloud services. Without the necessary capex of equipment sales, the size of a company’s revenue is no longer the primary indicator of its stature. Take 24th-placed Rock IT, recently chosen as an exclusive OneCloud partner by the world’s biggest integrator, Dimension Data.

DiData told CRN that size didn’t matter as much as Rock IT’s expertise with cloud and its profile within its verticals. This year’s eighth-placer, Paradyne, is another example. It was one of only two companies in the top 10 to generate less than $1 million of revenue, but the company was also Microsoft’s 2013 Public Cloud Partner of the Year (SMB). The Office 365 expert has more than 250,000 cloud user migrations under its belt.

Cloud computing has grown from two percent to nine percent to 12 percent of Fast50 revenues since 2011, fuelling the percentage of the services take from 41.2 to 56.5 percent over that period.

Hardware’s contribution to the Fast50 revenue mix, meanwhile, has dropped from 40 percent in 2009 to just 29.7 percent this year. Furthermore, the past 12 months has seen the biggest single decline for hardware, with revenue dropping from 36.3 percent in 2012 to 29.7 percent in 2013.

Software licence revenues are also in decline with the emergence of as-a-service models, however, that decline is less pronounced. Software dropped from 18.8 percent of revenue in the 2009 Fast50 to 13.7 percent this year.

Amalgamated cloud revenues exceeded the standalone hardware category revenues by more than $1 million. Sales of private, public and hybrid cloud together amounted to $30.9 million; hardware was worth $29.7 million.

Treated separately, hardware remains king even if it wears the crown with less confidence than ever before. That’s also reflected in the fact that hardware remains the most popular category among the Fast50 with 28 companies declaring standalone hardware revenues. That compares to 27 companies that declare standalone managed services revenues, for instance.

Some 21 of the Fast50 are currently active in the cloud.

Within cloud (click here for more information), private cloud was the largest sub category at $14.9 million and was also the most contestable. Some 13 companies were active here, with no single provider taking more than 30 percent of the total share across the Fast50. PCS Australia (14th) was the clear leader, with close to $4 million in private cloud revenues.

Fast50 companies in public cloud generated $12 million from the category, but the lion’s share went to one company, Bulletproof Networks (16th), which took more than 70 percent of the Fast50 takings.

By comparison, hybrid cloud on $3.8 million seems perfectly parsimonious, although it provides rich pickings for Advent One (44th), which took home almost 60 percent of those revenues.

Next: Spread of technology