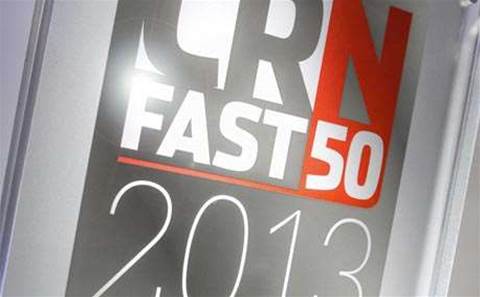 Since the launch of the Fast50 in 2009, Australia’s fastest-growing channel companies have become increasingly skilled at fishing from the same pond. This importance of cross-selling to existing clients was summed up neatly by the elder statesman of the 2013 Fast50. At a recent CRN roundtable, Syd Borg of this year’s 14th-fastest growing company, PCS Australia, said: “A good salesperson will go into that account, and once they’ve got it, they will milk it for all it’s worth – you sell them the toilet rolls. You’ll maximise every opportunity out of it and that gives you natural growth from within your own client base.”

Between 2009 and 2012, the percentage of revenue derived from existing customers grew steadily from 64.8 percent to a high of 71.8 percent last year. That has slipped back a little this year with new business accounting for over 32 percent for the first time since 2010.

Between 2009 and 2012, the small business sector also grew in importance each year for Fast50 companies finally registering a majority of the revenues last year. And in 2013, the small business sector again provides the happiest hunting for the Fast50 crowd, delivering at 53.4 per cent of revenues. That’s the highest level in the history of the Fast50.

By contrast, the mid tier has shrunk to its lowest level, delivering over 25.8 per cent of Fast50 revenues – its lowest contribution ever.

The share of Fast50 revenue derived from the enterprise market meanwhile has recovered from 18 to 20.8 percent which marks the first time it has increased since 2009 when it was at a peak of 29 percent.

Retail, entertainment and healthcare proved the fastest-growing sectors for the Fast50 in terms of the share of revenue they provide. On the flipside, manufacturing, mining and real estate experienced the biggest declines in relative share, reflecting the broader trends in the economy today.

Overall the big three – financial services, professional services and education – maintained their status as the most important vertical markets for the Fast50 members. Government also held its spot in the top five but manufacturing dropped out altogether, replaced by retail, which grew its share of Fast50 revenues from 6.6 to 9.2 percent.

The top sectors have been remarkably stable since the inception of the program. In 2009, the five biggest sectors were finance, government, manufacturing, education and retail/real estate. This year, the top five are finance, education, professional services, government and retail.

Another big change is that revenues are more diversified among the verticals now. In 2009, the top five verticals provided the Fast50 with 58 percent of revenues. This year the top five provided less than 51 percent.

We also delved into the industry performance of the channel’s fastest companies and found some clear vertical champions (see box, page 70). These are the Fast50 companies that particularly dominate certain niches.

The standouts were PCSA, which clearly led in five sectors including taking the majority of revenue in education. It was the only company to get 50 percent of its revenues from any one vertical. Infoready (11th) and Dataweave (12th) held leadership positions in three verticals apiece while Advent One (44th), Bulletproof υ Networks (16th), Sable Systems (19th), Katana1 (2nd), Kiandra (28th) and CTO Group (5th) were the other dominant sectoral players.

Indeed CTO’s performance – which not only joined the Fast50 but scored a spot in the top 10 – was strong enough to double the share of the defence vertical from 0.06 percent to just under 1.2 percent of Fast50 revenues.

Katana1, likewise, has been able to capture a strong niche, in its case telecommunication. Like CTO Group, it has helped to increase the relative share of its key niche within the Fast50 universe from 2.8 percent of total revenues to 3.6 percent.

Of course not every company wants to pursue a niche strategy, and nor is it necessary for success. Number one in the 2013 Fast50, NGage, has spread itself around, and instead focused on private companies with over 500 seats as its key opportunity. Managing director Jarrod Bloomfield told CRN that education and government – two of the big five – make up a lesser part of NGage’s revenue because they are so price driven.

Other companies, like CTO Group, are planning to take the expertise they have developed in the public sector, especially in defence, and replicate that success in the enterprise markets in Sydney and Melbourne. Managing director Greg Sly says the trends affecting the public and private sector are the same and suggests megatrends such as data, cloud and mobility will be big drivers in the year ahead.