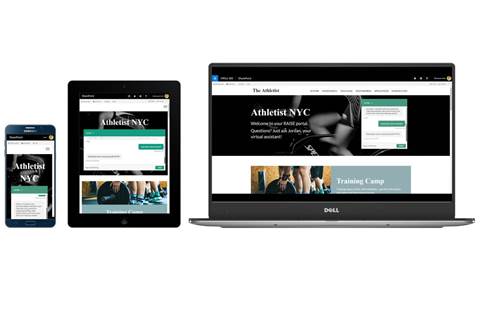 What if building a collaboration system that amalgamated existing chat, cloud storage and data repositories were as simple as drag and drop? And what if that platform were smart enough to do most of the work in the background without a line of code, releasing the designer to focus on outcomes?

That’s the promise Australian startup and entrant in this year’s CRN Impact Awards, LiveTiles, holds out to intranet developers and in-house collaboration leads.

Founded in Melbourne in 2012 by former SharePoint reseller and nSynergy founders Karl Redenbach and Peter Nguyen-Brown, LiveTiles was lauded by the likes of former PM Julia Gillard for its easy collaboration-building tools that appeal to diverse markets from SMB to enterprise and education.

And while its head office is now in swanky Midtown Manhattan, it will soon open its Asia-Pacific office in Geelong’s rust belt – once home to carmaker Ford, agricultural machine maker International Harvester, retailer Target, and aluminium processor Alcoa.

Any designer familiar with wireframes will be at home in the LiveTiles design canvas, a browser-based web page designer that amalgamates resources, applications and design elements.

But it’s the next step into automation and artificial intelligence (AI) that offers users an even smoother and more productive path as they build out their platform, LiveTiles says.

“AI assistants will be totally embedded into our lives much like electricity is today. We will be constantly plugged into information, and our AI assistants will be the interface to that connection,” says LiveTiles futurist, George Muir, who was formerly Ikea’s futurist during a 26-year career with the Swedish furniture maker.

“We have to understand the ethics behind intelligence but it’s not going away and it’s here big time. Within five years, it will be like a light bulb. People will wonder what happened before AI.”

Powered by Microsoft Azure, LiveTiles Bots is a drag-and-drop AI technology that uses native language processing to customise virtual assistants. The designer chooses from a range of ‘abilities’ or tasks the bot can do such as look up a dictionary or query the helpdesk.

“When people think of AI, they often think of the most complex thing that could beat the chess master,” says Peter O’Gorman, director of innovation and learning at LiveTiles partner AI Sydney. “LiveTiles simplify and de-risks deploying AI in your enterprise because it is easy to build and sits within your platform.”

Jewel in the crown

Daniel Hawkins, global IT operations manager at Michael Hill, said LiveTiles helped the jeweller get full use of its SharePoint platform.

“We’d had several attempts at a SharePoint strategy but it was difficult to push over the line and get our stores to engage with it,” said Hawkins.

“It wasn’t until I saw LiveTiles that we really had the missing piece in the jigsaw.”

“Ho Documents has become a central hub for our retail stories and the place to come if you want to know anything about the business,” he says. “People are finding what they want and we know it’s working because we’re not seeing as many IT requests.”

LiveTiles has experienced extraordinary growth since it reverse-listed on the ASX in September 2015 through the vehicle of former Mongolian thermal coal miner, Modun.

It includes among its 320 customers at March last year PepsiCo, Nike, US State Department, Hungry Jack’s and Michael Hill jewellers.

And it partners with Avanade, PwC, Deloitte, and rhipe – the latter an early investor having bought in 2014 nSynergy from Redenbach and Nguyen-Brown for $25.35 million and acquired 12.5 per cent of LiveTiles (nSynergy’s daughter company) for $2.5 million.

“LiveTiles has a balanced approach to market,” says LiveTiles VP Brandt, pointing to its professional consulting partners and Microsoft relationships.

“LiveTiles also employs a sales force that works closely with our partners to ensure that our end customers adopt the LiveTiles platform.”

LiveTiles amplifies its global marketing appearing at largest technology conferences such as Microsoft Ignite 2017 and a retailer show in New York.

“LiveTiles has recently established strategic locations in Zurich to lead market penetration of the region covering Germany, Austria, and Switzerland [and] expanded its presence across North America, the UK and is Latin America.”

And following an agreement with the Victorian Government, LiveTiles will base its Asia-Pacific HQ in Geelong to complement offices in Melbourne, Sydney (Crows Nest), and Hobart.

LiveTiles says it is growing five times faster than the industry average for cloud software companies, and has annualised subscription revenue of $6.9 million (245 per cent growth year on year).

LiveTiles is a finalist in the 'Exporting Innovation' category in the 2018 CRN Impact Awards. For a list of all finalists and further details on the awards, please head to the CRN Impact Awards hub. The awards take place during the CRN Pipeline conference. You can get more information and purchase tickets here.