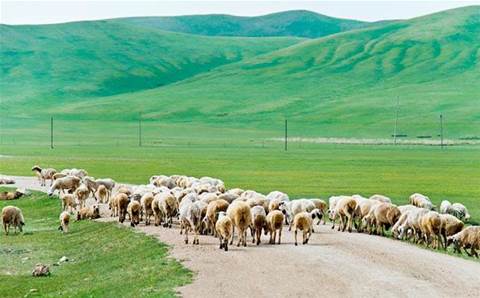 Bathurst-based farm Llanelli is using internet-of-things technology to count sheep and monitor water levels in dams and tanks across the 1300-acre property.

The farm, which is located about three hours west of Sydney, is using Farmdeck – a technology solution developed by Sydney-based Cisco gold partner Outcomex.

“We generally have to manually count the sheep and drive across the property to see where they’re located, and drive to dams and water tanks to check the water levels,” Morgan said.

For sheep tracking, Outcomex developed the first high-frequency RFID sheep tags in Australia, which can be tracked up to 8m from a reader, allowing the farm to get a more accurate count.

Morgan estimates a 20 percent saving in the farm’s operational costs through the use of IoT.

The use of sensors for water management saves about an hour of driving across the rocky land every day to verify the water levels of over 10 dams and three tanks.

The system had also proven itself by detecting a tank leak in under 30 minutes, saving the farm a “sizeable amount of water and money”.

More than that, IoT presented the possibility for Llanelli to proactively address many challenges faced by primary industries, including drought preparation, tank damage, stray livestock, and budget constraints.

The availability of good, real-time data means the farm can more quickly act as problems develop.

Farmdeck is integral to that, because it provides a user-friendly interface to consolidate all the information from sensors and cameras across the farm.

Outcomex said the project was delivered on time and on budget.

This was partially enabled by the company investing a day at the farm to fully understand how it operated and what Llanelli wanted, and then bringing that into the final solution.

The end-to-end design was significant because it had to take into consideration the remote area in which the farm is located and the low connectivity it presented.

This meant an emphasis on lightweight data transfer through the network, while still allowing for live transmission.

This is a challenge faced by many IoT projects, trading off the amount of data they are able to collect against how they can transport it elsewhere for processing and analysis.

Outcomex wound up using three different wireless technologies as part of the final solution, all of which supported the IoT connectivity protocol MQTT.

Outcomex is a finalist in the 'Network Evolution' category in the 2018 CRN Impact Awards. For a list of all finalists and further details on the awards, please head to the CRN Impact Awards hub. The awards take place during the CRN Pipeline conference. You can get more information and purchase tickets here.