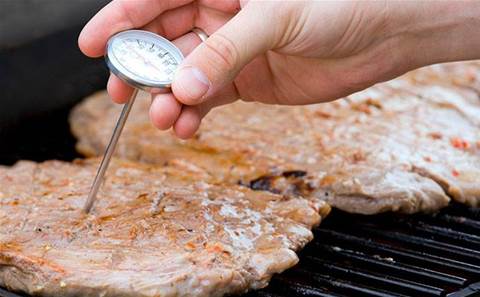 Of all the obstacles holding customers back from digitising their workplace, temperature is unlikely to be the most common culprit. But that was central to the hurdles faced by regulator Safe Food Production Queensland.

Food processing conditions can be extremely cold, wet and humid, which created challenges under the paper-based reporting system previously employed by the regulator's quality control officers.

For instance, measurements taken in moist environments would need to be rewritten once staff returned to the office.

Along with the physical difficulties of the previous system, the traditional safety auditing method only provided a snapshot of a food processor's safety compliance, rather than ongoing monitoring.

Switching to a digital reporting process that could cope with the challenging environment was the task set for Outware Mobile, which is owned by Melbourne IT.

Outware Mobile consulted with poultry and red meat providers as they set out to build an app that would to cater for their needs.

After testing that data could be captured with a tablet in food processing environments, Outware Mobile kicked off development of an application with a full project timeline of 12 months.

The result was the Safe Food App, a real-time data collecting system that can be used by the regulator and food processors.

The app was designed for iPad and written in the Swift programming language. The tool is specifically for workplaces such as abattoirs, which have varying temperature and humidity levels, and must be able to accommodate for workers using gloves in cold environments.

Quality control officers and food processor staff can enter measurements via the application including temperature, pH levels and moisture, which are uploaded automatically to a live web dashboard to make real-time decisions. The app can also push out notifications if there is a potential safety risk in a processing environment.

Baiada Poultry was the first poultry processing group to roll out the app in its Mareeba facility. National quality assurance and compliance manager Collin Naidu said adopting the app had encouraged transparency and continuous safety improvement.

"The implementation of the Safe Food App is an excellent example where a regulator is transforming with the digital age. The Safe Food App delivers a number of advantages both for the manufacturer and the regulator," said Naidu.

"This transparency is certainly a driver for continuous improvement, where real-time data on process control is shared with the regulator and microbiological testing results which demonstrates how well how the process was managed.

"This data also allows the regulator to have higher confidence in our process controls at our facilities on a daily basis compared to snapshot audits," added Naidu.

Outware Mobile is a finalist in the 'Workforce Empowerment' category in the 2018 CRN Impact Awards. For a list of all finalists and further details on the awards, please head to the CRN Impact Awards hub. The awards take place during the CRN Pipeline conference. You can get more information and purchase tickets here.