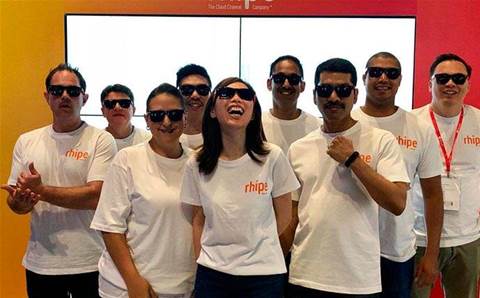 Microsoft's decision to scrap its long-running Australian Partner Conference and launch Microsoft Summit in Sydney was a big bet for the cloud vendor – and major distributor rhipe decided to stake its own claim around the expo.

Rhipe went big on its presence on the show floor and online, driving significant, measurable engagement and helping the cloud-skewed distributor secure a place as a finalist in the 'Distribution Performance' category in the 2018 CRN Impact Awards.

The company even saw partners sign up to the CSP program direct on its Microsoft Summit stand.

It's fair to say rhipe went hard with its messaging – and it looks to have paid off.

Rhipe's bid to achieve "maximum impact" included a bevy of activity at the summit, such as daily presentations from rhipe’s partner enablement team, ‘performance-style’ presentations on building IoT solutions on Azure, and three Azure sessions run by rhipe’s expert technical community, TechKnight, on its stand featuring Citrix and SkyKick.

The activity extended beyond the halls of the International Convention Centre Sydney and onto social media and YouTube. It led to major spike in online traffic, including a 49 percent increase in traffic to rhipe.com, a 29 percent increase in page views, and 3,000 new website visitors – up 52 percent.

To top it all off, rhipe distributed 750 gift bags and served more than 4000 coffees over the course of the event.

The distributor, which sent more than 30 staff to the summit, captured 1387 leads, more than five times the 250 leads it gathered at the 2016 Australian Partner Conference and exceeding its 2017 lead-gen target of 1000.

Dominic O’Hanlon, rhipe's chief executive, said: "We believe Azure is a game changer for our partners, allowing them to free up large capital investments and rapidly grow their businesses with consumption-based economics.

"The Summit gave us the opportunity to take this message to market, with our technical experts
delivering live technical demonstrations while other business-focused personnel presented the possible profitability outcomes for the channel.

"From the rhipe event experience, we gained 1,200-plus engagements over the four days with a mix of existing partners exploring new areas of their business, as well as many new partner conversations."

Rhipe, which is publicly listed on the Australian Securities Exchange, has reported significant growth in CSP business, recording 186,400 seats as at 31 December 2017 with monthly Azure revenue and consumption gaining momentum.

For the half-year to 31 December 2017, rhipe's revenue rose 22 percent to $88 million, while its Microsoft CSP revenue grew to $13 million, up from $5 million in the previous half.

Brad Clarke, channel development lead, One Commercial Partner, at Microsoft Australia, said: "We were pleased with the commitment and drive that rhipe demonstrated as a strategic partner of Microsoft at our inaugural customer and partner summit in November 2017.

"One of rhipe’s core strengths is their ability to take core marketing and channel investment and turn it into outcomes for both Microsoft and rhipe, this was evident by their ability to drive new partner acquisition following the event," Clarke added.

Rhipe is a finalist in the 'Distribution Performance' category in the 2018 CRN Impact Awards. For a list of all finalists and further details on the awards, please head to the CRN Impact Awards hub. The awards take place during the CRN Pipeline conference. You can get more information and purchase tickets here.

Cloud application revenue made easy
By Steven Kiernan
Apr 10 2018
6:00AM