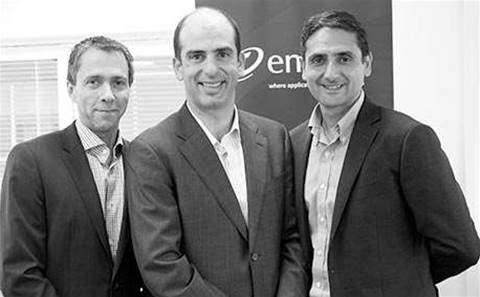 Ask most resellers and they’ll tell you how their top vendors and disties share some of the credit for their growth. But seldom do you find praise as effusive as Joseph Mesiti’s towards his preferred information security vendor.

“We operate as an extension of Palo Alto Networks. There’s a tight coupling. A lot of vendors are one-trick ponies but I’m a solution seller so I can add value to them. I can complete the customer requirements list with a product from here and there so it’s a symbiotic relationship.”

This sense of coalescence perhaps isn’t so surprising when you consider Enosys takes its name from the Greek word for unity, enosi. Mesiti says that if other resellers want to emulate Enosys’ growth – it more than doubled revenue to $4.1 million – they should “make sure your reps are talking to vendors daily”.

“Use the vendor as [your] extension. Maybe it’s personalities on both sides, it has to click but it’s like all relationships, you have to understand what your vendor reps want from you. It’s treating everyone as a customer; my vendor reps want certain things from me, too.”

The mid-market reseller has carved a lucrative niche by representing disruptive technologies such as converged infrastructure vendor Nutanix, log file analysis platform Splunk and getting on board early with the likes of VMware, Riverbed and Palo Alto.

But while he’s keen to introduce vibrant new technologies to the market, Mesiti does his due diligence because the cost of certification and lost time through “onerous” study creates a drag on the business.

“Whenever we bring on a new vendor, we think long and hard as each wants a certain number of skills. It helps if there’s complementary skills between vendors.”

Indeed, Mesiti is looking to his vendors to drive growth over the next one to two years. And while cloud is a “work in progress”, Enosys will expand its relationship with Amazon Web Services.

“With the vendors we’ve been supporting the past couple of years we’re past an inflection point and there will only be exponential [growth],” he says. “Palo Alto will grow more than 100 percent year on year. Likewise, with Splunk and Nutanix. On the Nutanix front it’s a bit higher contested but I truly believe in the product.”

But fronting disruptive technologies will lead the next phase, he says.

“We knew Nutanix, converged infrastructure, is very exciting. It’s an area in which a traditional infrastructure provider wouldn’t play. But the simplicity of the platform and support from the Nutanix guys is fantastic.

“That’s allowed us to pursue that avenue and grow another area of the business. The key is, we’re in the industry, we read the magazines, and we step back and take a look at where the market is going and try to spot trends early.

“In the early days with Palo Alto, you’d go into a customer and say I want to talk to you about Palo Alto and they’d say, ‘Palo Who?’ I’ve seen the same story with Nutanix but it’s changing rapidly.”

This freedom to innovate and grow rapidly with new technologies is “where the big boys fall down”.

He adds: “They don’t have the flexibility to grab an innovative player and run hard with it.”