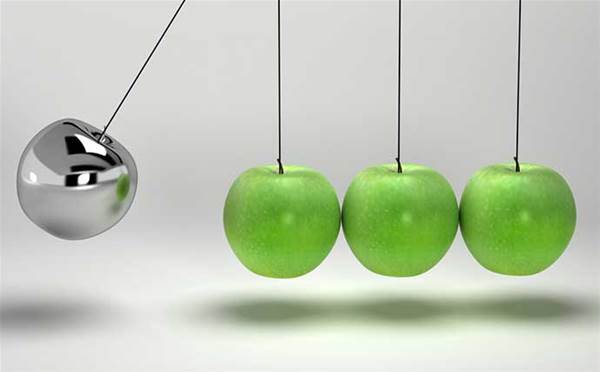 COMMENT  |  When you were at school you no doubt heard the story about Isaac Newton sitting under an apple tree and devising his theory of gravitation while observing the falling fruit. It is, I hate to disappoint you, an apocryphal story, but has nonetheless led to an unbreakable link between Newton and apples in the popular consciousness.

When Apple Computer Inc first started, its logo included a representation of Newton under a tree. It was meant to evoke the concept of discovery, insight and genius.

What it was not meant to evoke were the concepts of gravity and inertia, two concepts finding their way into most stories published about Apple lately. Apple is drifting. It isn’t executing on its plans. Its trajectory is not favourable.

It’s not really accurate to apply such concepts to complex organisms like corporations, but it can be useful in a metaphorical sense.

For instance, Apple recently lost a number of notable employees. This happens all the time in a company with tens of thousands of employees, so not too much should be read into it. But there is a bit of a pattern. For instance, one of the departures was Chris Lattner. Chris Lattner was the guy in charge of developer tools. He was responsible for XCode. He was responsible for Swift. In his decade at Apple, he brought about tools that were essential for the success of OS X, the transition to Intel processors and the growth of the iOS App Store ecosystem. Quite a résumé.

Now, you might well say, these accomplishments are fine, but they are complete. He’s achieved great things, but they’re done now. Time for the next challenge. And you’d be right.

Then there is Matthew Casebolt, driven by nominative determinism to become an industrial designer with a specialty in hinges. He led the design of the original MacBook Air — a design that has influenced not only every subsequent Apple laptop but the entire category of Ultrabooks across the PC industry. Again, quite a thing to have on the CV.

Casebolt, like Lattner, is pursuing his next challenge at Tesla, where he will be in charge of hinges and closures. Like Lattner, his work at Apple — after a decade — was done.

These are but two of the bigger names Apple has lost in recent times, people driven to innovate and to discover new ways of doing things, who no longer feel there are things to invent in Cupertino. That’s really
not good.

People like that were drawn to Apple because it was an innovative and exciting company. There was a revolution on and they signed up. Now, evidently, the revolution is at Tesla.

Can you blame them? The rumbles about an Apple television amounted to nil. The very loud rumbles about a car fizzled out (and the number of people who left Apple and ended up at car companies more or less confirmed that rumour). There was the Watch, but it kind of disappointed. Apple is making good products and they’re selling pretty well, but that’s not a revolution. That’s just business.

During CES a rumour emerged that Apple was working with noted optics company Zeiss, possibly on some sort of augmented-reality device. OK. Because Google Glass worked out so well.

If there is something brewing with Zeiss, it’s unlikely to appear in 2017. Just like the car won’t and the TV won’t. Maybe there will be new Mac hardware, but even if there is and it’s amazing that’s not where the revolution is. 2017 is going to be another year where Apple hopes to keep rolling on the momentum of the iPhone: the revolution of a decade ago.

And that’s a fair bit of momentum. Billions of dollars worth of momentum. But Apple has already reduced production on the iPhone 7; momentum is not infinite.

Momentum, as students of Newtonian physics know, is closely related to inertia. Unless Apple acts soon to alter its course (to start executing on some of its plans, for instance) the external forces acting on it will eventually overcome it.