Apple WWDC is going digital and it's a good thing 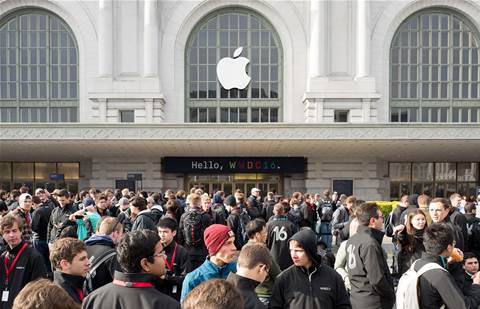 COMMENT  |  As COVID-19 made its way to the various corners of the globe, it had a chilling effect on numerous industries.

Notably, of course, international travel and trade. Airlines are suffering. Tourism is suffering. Any business that relied on a free flow of goods in and out of China (say, for example, Apple) is suffering.

Heck, even the release of the new James Bond film has been postponed to November. Which is probably a good thing — James Bond is a walking talking vector for spreading contagion.

Fear of COVID-19 has also seen the cancellation of trade shows like Mobile World Congress and conferences being digitised by tech giants including Facebook and Microsoft. Google cancelled its I/O conference for the year. And all eyes turned to Apple.

The start of March, when the true scale of the coronavirus pandemic became apparent to even the most optimistic and deluded, is usually when the lottery for tickets to Apple’s Worldwide Developer Conference (WWDC) is announced and invitations go out to select media. When it didn’t, speculation was rife.

By mid-March, it was official: WWDC 2020 is a virtual event.

WWDC has to happen in some form or another. The betas and preview versions of software distributed and demonstrated to developers at WWDC have a huge effect on the value of hardware announcements Apple will make later in the year. Not having the Conference would be enormously damaging. But it doesn’t have to happen in person. At least this once.

Long gone are the days when every interested Apple developer could fit into the convention centre in San Jose. The WWDC has even well outgrown its larger digs in San Francisco, meaning that places are allocated on a lottery basis. That makes it hard for developers outside the USA to plan time away from work (and not much easier for those inside the USA). The WW in WWDC is less and less representative of who actually gets there.

Apple has adapted somewhat to this reality, with streaming of sessions online. But the real value of the conference — being able to talk to Apple engineers and discuss issues interactively — extends only to those happy few who win the lottery. Those watching online can only listen in.

Cancelling WWDC would force Apple to think harder about how to make the WWDC more WW. How to add interactivity for remote sessions and include more developers unable to get to California. I don’t know how it could be done — Group FaceTime sessions seem like a bandwidth nightmare — but there are a lot of people who work at Apple and there’s a good chance some of them are smarter than me. They’ll come up with something.

Heck, my kids’ high school is managing to conduct education interactively online. Google Classroom, Microsoft Teams and Zoom are household names all of a sudden. That has to be keeping Tim Cook awake at night.

Of course, another exceedingly yet unquantifiably valuable aspect of WWDC is stuff that has to happen in person. The chat at a side event or one of the evening parties that results in a product heading in a different direction. The chance encounter in a hotel lift with a fellow developer who ends up being a collaborator and business partner.

There’s no substitute for an in-person conference when it comes to that stuff. But chance encounters in hotels are also how disease spreads, so we have to stay home for now.

So WWDC and its lottery system will have to return eventually — hopefully next year. And when it does, the systems that Apple puts in place to extend the reach of this year’s event can be used again. Future conferences will be far more accessible to far more developers — and therefore far more valuable to Apple — if this one is forced to happen remotely.

Of course, another thing that would be lost if WWDC was cancelled for the year is the audience reaction at the keynote. Gone would be the enthusiastic whooping and hollering and cheering at the various announcements. In its place just straightforward technical information.