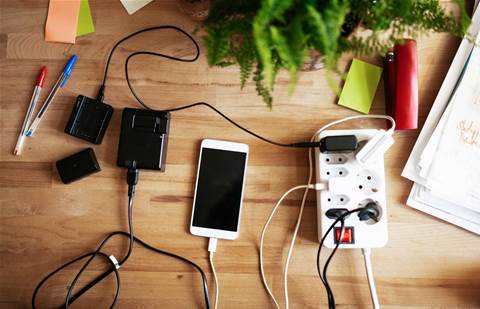 COMMENT  |  It’s rare that government officials have any impact on the FAANG group of tech giants ruling the modern world.

The FAANG group, by the way, is Facebook, Apple, Netflix, and Google. Microsoft would also be in there if it didn’t ruin the acronym.

Anyway, somehow the Europeans did it. In a small way. The EU passed a directive mandating a common charger for all mobile phones. According to estimates, old chargers generate more than 51,000 tonnes of electronic waste per year in Europe alone.

Apple, of course, was the most voluble dissenter. Apple claims that the legislation would limit innovation. Phone chargers aren’t really a locus of innovation, but I have to say I was a huge fan of the magnetic power cable with the MacBook. For some reason, I tripped on that cable frequently enough to feel like it was an ingenious solution.

Electronic waste is a real issue and it is especially obvious in public places such as airport lounges where you will see a bank of different chargers.

Ironically this decision will create a huge amount of electronic waste. There is a vast ecosystem of devices that support only the Apple Lightning connector. Think of all those hotels with those lightning-dock clock radios on the bedside tables. they will all have to be replaced with the exact same clock radio but with a USB-C connector.

The EU directive is bigger than power cables. It is a rare case of the government telling manufacturers to put the environment before profits. Apple has made billions from its closed ecosystem. It encourages hundreds of millions of people to keep buying Apple products – because they have already invested so much in Apple-compatible peripherals.

There’s a lot more here to do. Tech manufacturers are prioritising weight and size when building products. They don’t focus on sustainability or recyclability.

Take Apple’s Airpods, a runaway success that has sold more than 80 million units and represents 60% of the wireless headphones market.

The earpieces are glued together in a way that they can’t be recycled at all. Once the tiny battery inside is unable to hold a long-enough charge, you essentially have to bin them.

Why no replaceable battery? Even a slight increase in size would be worth it. The home entertainment market is even worse. Sony, Warner, and other recording giants were instrumental in forcing copy protection into cables, amplifiers and DVD players. This guaranteed wastage on a massive scale.

Seven channel AV receivers include eight or more large power supplies (including for the subwoofer) that are heavy, well-made pieces of engineering. The current transition to 4K resolution will require people to throw out perfectly good AV receivers because they lack the HDCP 2.2 standard required to watch 4K. The lack of concern for the environment is nothing short of criminal.

The crazy thing is that there is an obvious solution. Split the processing into a separate box to the amplification. Then you can just replace the processor without having to throw out all those power supplies and supporting circuitry.

And here is the shameful part. You can indeed pay for such an AV setup; the components are called a pre-processor and power amplifier. But the AV manufacturers charge an enormous premium by building gear only for wealthy audiophiles.

Yamaha’s cheapest pre-processor and power amp combo costs $8000. It sells a combined AV receiver for $485 – with most of the same Dolby licensing and other carry-on.

There is nothing stopping Yamaha from separating splitting that $485 receiver into two boxes and charging say $1000 for both. The only reason is sheer profiteering, at the expense of the environment.

I asked a hifi dealer why the AV companies didn’t make a low-cost pre-processor. He shrugged.
“Honestly, it’s a very good question. I can’t tell you what you pay for features, components and licensing in an AV receiver.”

Companies need as much space as they can to innovate. But established industries that engineer business models based on intentional obsolescence? Government needs to step in, for the sake of the planet.