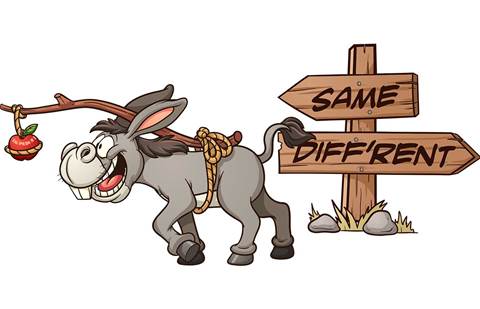 COMMENT  |  Apple makes a fairly big deal about originality. Its very logo, emblazoned upon every product, calls to mind the “original sin” of eating from the tree of knowledge. Apple thrives — or claims to — on the innovation in its metaphorical DNA and will, with little prompting, rattle off a list of its many original innovations.

Woe betide anyone who, in any way, infringes upon its expressions of originality, for they will be met with a phalanx of lawyers trained from birth to show no mercy (I’m looking at you, Samsung).

Basically, the word from Cupertino is that originality matters a great deal to Apple.

Imagine my befuddlement, then, upon reading that the former showrunners of Once Upon A Time — Adam Horowitz and Edward Kitsis — have been signed on to helm a reboot of Amazing Stories being produced by Apple as part of its push to compete with the likes of Netflix and Amazon with original content.

Original content. These are guys best known for rewriting classic fairy tales in a modern setting, who are now tasked with reviving a moderately successful anthology series from the 1980s. What part of that is “original”?

Sure, Apple’s hardly alone on the nostalgia train. Netflix has Lost In Space. YouTube Red has Cobra Kai — a series based on the Karate Kid franchise. Last year US network CBS launched its CBS All Access streaming service with the return series of Twin Peaks. Then there’s Roseanne, Will & Grace, The X-Files and I’m sure many more out there. There is no doubt that there is a viable business model in giving customers a new version of a thing they have already shown they like.

Apple is reported to be spending a billion dollars on developing original content. So far that has produced Planet Of The Apps — a carbon-copy of Shark Tank featuring app developers looking for venture capital — and Carpool Karaoke — a segment from a late-night talk show stretched far beyond the point where the novelty wears off.

In short, Apple’s attempts to create a faster horse have so far resulted in donkeys. At what point do we try something else?

This is a company that sued Samsung for a billion dollars over its patent on “a black rectangular device with rounded corners”. I’m not even making that up. The same company that went to war to defend the uniqueness and innovation of a geometric primitive also thought a couple of TV shows that look exactly like other TV shows would be perfectly fine.

It’s the cognitive dissonance, you see.

When the Apple Watch was launched, there was a lamentable video (probably narrated by Jony Ive) that said, in part, that being the first to market with a product wasn’t as important as having the best product. It’s arguably true, but it’s an awful thing to hear Apple — Apple — say out loud.

Some of us remember Apple in the 1990s, when it tried to be like every other beige-box computer maker out there — emphasising how much the same it was, rather than how different. It didn’t work out too well.

Giving the customers what they want — being the same, but a little better — can work for a while. But not forever. To do something truly remarkable, you have to be prepared to take a risk on something completely original. To “think different,” as it were.

And that sometimes means failure. Not every original thing is going to be the iMac or the iPod or the iPhone. Sometimes it’s going to be the G4 Cube, or the hockey-puck mouse that came with the original iMac. At least it won’t be boring.

Same goes for “original” content. Sometimes it’ll be great and inspired, and sometimes it will be forgettable rubbish. At the very worst, it won’t be the same beige boxes everyone else is making.