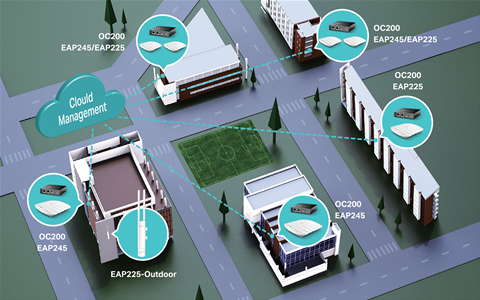 As adoption of Wi-Fi 6 equipment propels a new wave of infrastructure upgrades, ever-smarter software defined network (SDN) tools promise significant new revenue streams for network integrators and MSPs upon whom pandemic-challenged customers are coming to rely more than ever.

The disruption of the pandemic reshaped company networks, with many consumers upgrading their home Wi-Fi with unmanaged devices that existed outside of corporate network management umbrellas.

Automatic self-discovery tools require nothing more from remote branch staff or employees than that they plug devices into a power point and connect to Wi-Fi; the equipment automatically registers itself to a centralised cloud console, then diagnoses and configures itself with minimal or no customer intervention.

“As long as someone has a little bit of networking knowledge, it’s not onerous to get it going,” explains Sean Fletcher, marketing manager with TP-Link, which has been leveraging its strong position in home networking to launch an assault on the SDN market.

“You can manage it from anywhere,” Fletcher adds, “and the central IT person can quite easily view everything that’s going on across sites, adding things into the system as they need to.”

That interface also connects to TP-Link’s JetStream switches and SafeStream gateways, providing a unified, cloud-accessible management console with visibility and control across the network.

An explosion of interest in Wi-Fi 6 has primed the Australian market for the technology, with many companies taking the opportunity to upgrade in-home and branch-office office networks that may never have been managed before.

IDC, for one, observed enterprise Wi-Fi 6 adoption surging to comprise 56.7 per cent of access-point revenues during the second quarter, up from 50.5 per cent in Q1 and 43.7 per cent in the quarter before that.

Australia’s annual increase of 19.6 per cent was well ahead of many other countries, and consumers were also embracing Wi-Fi 6 – with sales of the new-technology devices in that segment comprising 24.5 per cent of consumer segment revenue, up from 20.3 per cent in the previous quarter.

IDC also recently noted that Australia’s related software-defined WAN (SD-WAN) market will grow at 28.75  per cent annually through 2024, picking up steam after the pandemic slowed growth to just 5 per cent last year.

In this context, Fletcher believes the prospects for SDN-enabled networking gear like Omada are bright.

“The issue most people have with their Wi-Fi at home isn’t so much speed as range,” Fletcher explains, “and not being able to get coverage further in the home.”

“Our consumer gear has gotten more like our high-end premium stuff, and that’s where we’ve seen real growth during this work-from-home situation.”

Yet even as they rush to embrace faster Wi-Fi 6 solutions, Fletcher adds, “people don’t necessarily want to know the ins and outs of it; they just want it to work.”

Balancing ease of use for consumers and management capabilities for SMBs, TP-Link built the Omada family as a hybrid that offers plug-and-play installation but also integrates “enough configuration capabilities that you can make the network work for a variety of different businesses and needs,” Fletcher said.

“They can quite easily get an overview of everything that’s going on, and add new elements to the system as they need to.”

By reaching across the high end of the consumer market and into the massive SMB market, Fletcher said, TP-Link’s Omada strategy is gaining currency in Australia and New Zealand.

The company has particularly been fielding interest from multi-site small-business operators – think small hotel operators with several sites – who want the pairing of flexibility, control, and ease of use to deliver networks that just work.

This desire for simplicity presents a significant opportunity for MSPs, who can tap the centralised cloud interface to build ongoing network management, security controls, and incident response into their customer relationships.

As they recover from the pandemic’s disruption and facing shortages of technical staff who may well be working from home, Fletcher said, companies are already primed to recognise the value in a managed solution that can be ably handled by an MSP from elsewhere.

Underlying the new capabilities and new revenue streams, he added, is a continuation of TP-Link’s value-focused brand proposition – which makes an Omada-based managed network an easier upsell for margin-conscious MSPs.

“We’re known for value,” he explained, “and the level of performance that you get from our products. We always want to have the best technology in the market for the most competitive price.”