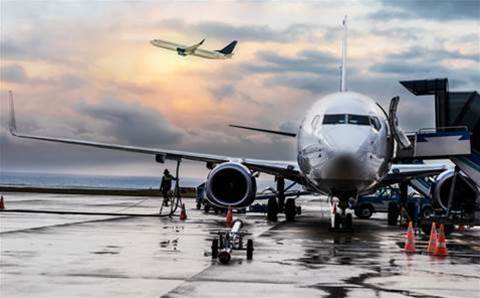 CRN surveyed more than 100 Australian independent software vendors to get a better understanding of the challenges and opportunities faced by startups and established businesses alike. Respondents came in all shapes and sizes, with many different ages and experiences. A majority (60 percent) were under five years old, with 2013 and 2015 the two most common founding years.

Some ISVs had attracted hundreds of thousands of dollars in funding, others millions (the highest annual funding was $125 million). The average headcount was 65 staff, though this mean was skewed upwards by a few of the largest and most successful Australian software companies that employed many hundreds of staff. The median headcount was 15 staff.

The results showed a relatively vibrant Australian software scene, but one whose confident growth projections are being hamstrung by the battle for talent. 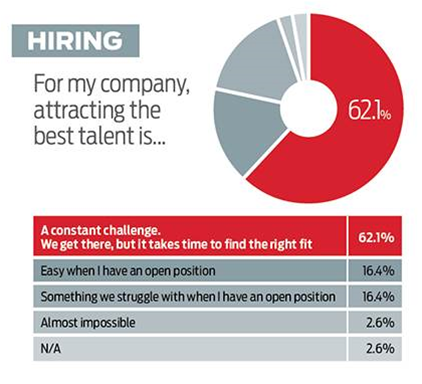 Capital for growth wasn’t the biggest hurdle for the 116 startups and established software companies that contributed to our survey. That dubious honour went to talent: finding and keeping the top motivated staff is their greatest challenge.

Attracting capital to fund growth was not a major issue for this group of ISVs. Many have access to capital through profitable growth and proven business models that are simple to fund. Nearly three quarters said they could either fund their own growth or had no problems attracting funding for growth. “There’s plenty of money around for good companies,” said the general manager of a cloud orchestration vendor based in Melbourne.

However, the CEO of an invoice processing software vendor in Adelaide added: “We found more investors than we needed, but nobody moved as fast as we wanted them to, or with the terms we were hoping for.”

Some looked offshore for funding. “We are a global technology play – and the capital is too thin in Australia,” said the founder of a Sydney-based voice authentication vendor.

The majority of respondents told us their ambition was to grow a world-class private company; fewer than ten percent wanted to IPO and only a third want to be acquired by another organisation.

Salary expectations remained a challenge in retaining talent. The two major reasons that staff leave are the lure of bigger companies and projects, and being attracted to better packages.

“We invest a lot in our team to help them build their skills, so it’s natural that others will poach team members from time to time. There are also extremely high salaries being thrown at people in tech roles from larger corporates,” said the CEO of a Melbourne-based mobile digital application developer. The lead software architect at a Perth-based software developer said his company’s challenge was “pressure to keep costs down versus maintaining a salary for technical people that is within a reasonable ‘ballpark’ of market rates.” 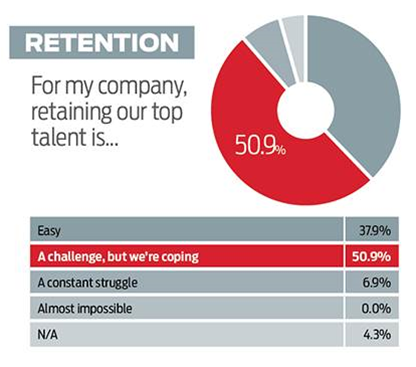 The respondents were an ambitious and optimistic group. The top three organisational growth challenges in the next 12 months were to grow local customers, to grow in international customers, and to find new routes to market locally and globally. About a quarter were prioritising new channel partners.

Ingram Micro, which sponsored the survey, says they can help ISVs by selling their services through Ingram Micro’s local and global marketplace platforms. This provides ISVs with access to thousands of channel partners globally.  Earlier this year, Ingram Micro introduced APS Connect, which integrate ISVs into the marketplace. ISVs can now quickly design, test and publish their solutions in just a few clicks  automating much of the integration.

It is known that some of Australia’s most successful listed ISVs – companies such as Computershare, Wise Technology and InfoMedia – earn a substantial proportion of their revenues from overseas customers. Many of the ISVs that took part in our survey
are looking to capture this opportunity by growing technology partners and scaling their indirect channels to market in Australia and around the world. In fact, one respondent told us: “Our international base is better than our Australian one – we need to shore up our local footprint.” 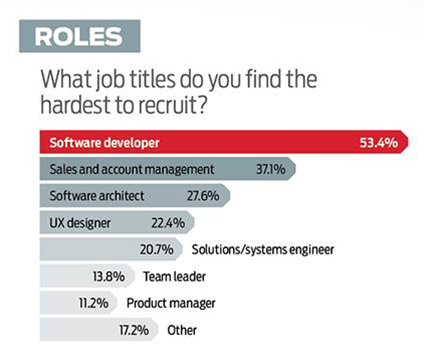 These local ISVs are ambitious about their growth prospects. More than two-thirds expect to grow faster than 20 percent per annum. Some 38 percent expect to double business in the next 12-to-24 months.

As a result, they are all looking to employ more staff to capture this opportunity faster. Combined, the survey respondents employed a total of 7000 people.

But where does talent come from? More than 60 percent employ exclusively onshore – especially software developers. This might seem counter-intuitive, given the survey results also showed that software developers were the most difficult roles to hire and keep. The director of a health technology firm in Adelaide told the survey: “Locating suitably qualified, specialised talent in Australia is very difficult. When I was living in the US, I found the recruitment process considerably easier and more cost effective.” 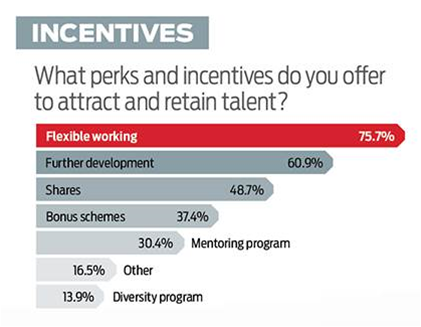 There is a big focus on hiring local resources, but finding qualified candidates is the biggest barrier to growth, especially when it comes to hiring software developers. “We’re getting anywhere from 40 to 70 applicants per role advertised,” said the general manager of a cyber-security provider based in Melbourne. “Generally though, there are only a few people with ‘great’ talent who have applied.”

More than 57 percent of respondents said that over‑stretched resourcing was their biggest constraint to growth. Finding the right people remained a higher priority than securing the right funding or finding new customers to work with.

Looking offshore was the only solution for the founder of one IT security startup based in Melbourne, who told us: “We have a lack of experienced developers in Australia, and we’re always sponsoring someone to stay here.” 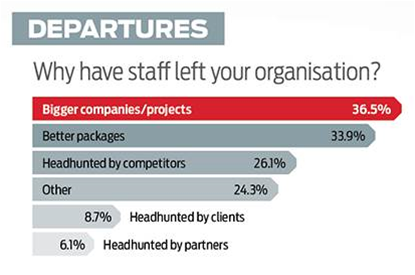 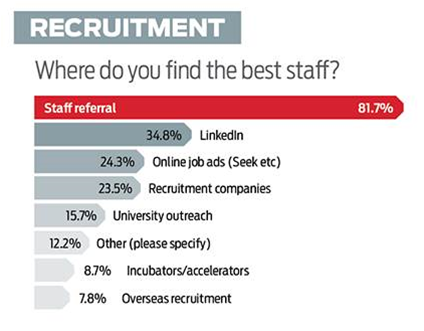 ISVs continue to use traditional approaches to finding new staff. Staff referral was by far the most dominant course of action, with 82 percent of respondents saying this was a way to find the best staff. In a distant second place was LinkedIn, at 35 percent.

Seek and recruitment agencies only received the tick of approval from fewer than 25 percent of respondents. While creating access to homegrown talent might solve their biggest business challenge, there was limited investment – and in some cases, none at all – in graduate recruitment programs.

“Hiring engineers has become a constant job for startups,” said the CEO of a Sydney-based compliance and safety software vendor. “We tend to hire as soon as we find a fit rather than wait until we have a position as it is impossible to fill reactively.” 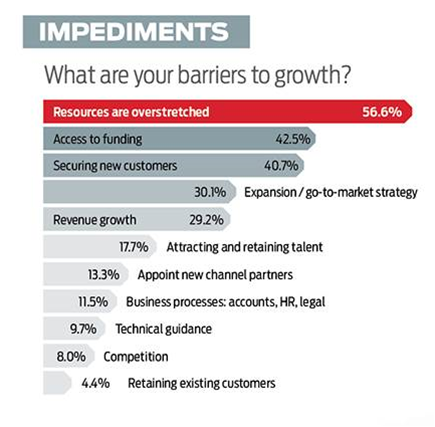 These ISVs had a heavy focus on growth in their domestic market. When asked of their top priorities for the year ahead, 64 percent said they wanted to grow Australian customers. They were also ambitious to expand their international operations – 52 percent of respondents wanted to grow internationally (this mirrored data from a third-party report, the 2016 Startup Muster Survey, which said that 52.3 percent were looking to expand outside of Australia).

Rounding out the top three priorities for the year ahead was “Find new routes to market for our products”, which was a priority for 48 percent of respondents.

Some 79 percent were focused on B2B markets, only 5 percent on B2C and the balance focused on both sectors. Software companies focused on B2B markets need to grow their international reach and effectiveness, because customers demand more tailored solutions to adapt to the requirements of their country. The channel is the way to achieve this, and many of our respondents were looking to grow their business through strategic partnerships and reseller networks in the next 12-to-24 months.

This takes time and capital to implement effectively, and ISVs have the appetite to make this investment. There are plenty of great examples of ISVs doing this well, with those investing in overseas networks enjoying growth faster than their domestic market.

Among our ISVs, the largest slice of revenue currently comes through direct business, both face-to-face and online. Looking ahead to the next two years, the biggest change in routes to market will be the growth of online channels and alliance partnerships.

Public cloud partnerships were dominated by Amazon Web Services and Microsoft; some 55 percent of respondents said that AWS underpinned their technology, and 34 percent pointed to Microsoft Azure. Honourable mentions included Salesforce and Google. Although AWS was a more common public cloud layer than Azure, a greater number of respondents told us that Microsoft was their top alliance partner.

Methodology
Research conducted by CRN and sponsored by Ingram Micro Australia and Microsoft. Analysis based on responses from 116 Australian independent software vendors that took part in our survey, which ran online during April and May 2017. CRN filtered out any responses from non-ISV companies that took part.