Australia's slow but sure shift to digital signatures 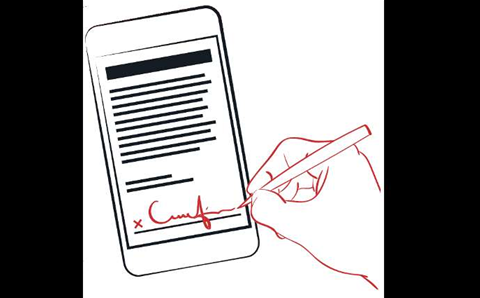 What is the cost of sending a paper document? It’s a question a lot of Australian businesses have been content to ignore. They may email invoices, but the “digital first” philosophy often falls over when someone needs a signature.

Electronic signatures are well established in the US and in parts of Europe. They have been legally recognised in Australia since 1999 under the Electronic Transactions Act. And yet the majority of leases, loans, projects and partnerships still require the use of “wet” signatures.

Government departments have been the worst offenders and taxpayers have paid dearly for their intransigence.

An online transaction costs as little as 40 cents; a personal interaction costs over 40 times more, or $17, Deloitte Access Economics wrote in its Digital Government Transformation report.

Phone transactions and interactions are estimated to cost $6.60 each, making them 16.5 times more expensive, while postal transactions chalk up a cost of $12.90 a piece, according to Deloitte.

Who knows what it costs SMBs to stick with signing paper but it’s pointless waste that could be avoided. The amounts would vary but the ratio is unlikely to be much different.

Thankfully, we could be on the verge of a change in attitude. The Federal government is slowly moving to a unified set of digital forms across all departments. The Standard Business Reporting (SBR) framework will allow the Australian Taxation Office and other departments to automatically fill digital forms from the government’s various databases.

E-signatures are a part of the digitisation of government services and their widespread adoption will inevitably increase their acceptance by business owners.

The accounting software companies are also jumping on the digital documents bandwagon. MYOB, Xero and Sage have added e-signatures to their practice management software. An accountant can fire off a tax return to a business owner to sign with a tap of their finger on a smartphone.

Sage and MYOB have cooked the signing software into their apps, while Xero asks accountants and bookkeepers to buy signatures in bulk from Adobe eSign.

The vendors’ promise to accounting professionals is that their clients will sign faster with e-signatures. The streamlined workflow will reduce the cost of service delivery for accountants and a faster signing will reduce their billing cycle and increase cash flow – all things accountants (or any business owner) would be happy to hear.

The Big Four banks are investing heavily in digital services for SMEs and one is white-labelling the enterprise signing app eSignLive by US security vendor Vasco.

Vasco, which recently acquired original vendor Silanis, considers Australia a target ripe for digital signatures. The company has opened offices in Australia and moved eSignLive to instances on IBM’s SoftLayer cloud. The software can be hosted in any country to comply with local privacy and data security laws.

Australia is “pretty far behind”, says eSignLive president Tommy Petrogiannis. “The need for education in Australia is the same as it was in the US over four years ago. There are still concerns about whether the technology is illegal.”

Adobe and DocuSign are two other major players in digital signatures, though with a bigger base in SME and consumer than enterprise. Telstra invested in DocuSign last year as part of an agreement to introduce the technology to its business customers.

This spells opportunity for resellers who provide a broad range of services to SMBs. Businesses will need to integrate digital signatures into their existing workflows and apps. Implementation, change management and process mapping for digital transactions are services likely to be in high demand over the next few years.

Looking for a conversation starter? When so much business is conducted these days on mobile phones, how are your customers dealing with documents? The savings in paper, time to sign and sending rewrites backwards and forwards can make a real difference.

It’s also worth noting that millennials, who are growing as a share of business owners, are accustomed to interacting online.

It goes without saying that you can’t push this technology without adopting it first. Do you send your contracts for digital signatures? What better way to demonstrate all the benefits of the solution than using it the next time you win a new customer.