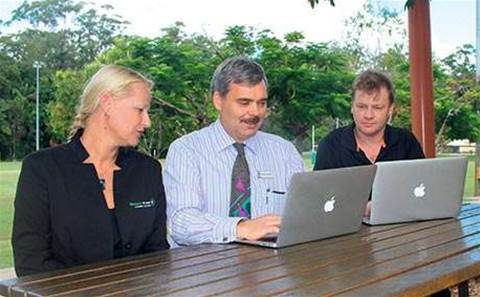 How did the project start?

Corrie Orpin: We’ve been working with Matthew Flinders for the last four years. We’ve been doing their back end infrastructure, their servers and their networking switches and looking after their vendor management. They put out a tender for their fleet and we were the successful applicant.

How long have you been an Apple supplier?

Corrie: We’ve been trading for 14 years now, and brought on Apple in the last four-and-a-half years. We are one of only a select few on the Sunshine Coast that are Apple Consultants Network. You need to be ACN to deal in education.

What Apple products do you supply to schools?

For this rollout, we did the procurement, the organisation, we had to then unpack them, we had to do asset tagging, we had to put all the covering on, inventory, did all the accessories – basically get them all ready in pre-marketed bags for the students for enrolment day. We did the same thing with the iPads. So it was basically all ready so they could easily either image them out or they were set up for the students to go.

What kind of IT team does Matthew Flinders have?

Patrick Verhoeven: We have three system administrators who look after the networks, servers, the data integration, security and client services. They have a team of help desk support in tier 1 and 2 that enable the front-end services and the clients to receive that face-to-face support. It includes a loan pool, in-classroom visits, individual fault-finding, and group workshops.

What led you to buy Apple devices from Secure Access?

Patrick: The college is keen to have an outstanding one-to-one laptop program for students. We feel it’s important to deliver the best product in a timely, economical way.

In designing the architecture behind the project, which includes infrastructure and the actual end-point devices, we had a look at what would be most cost-effective from a total cost of ownership perspective, appealing to end users and easy to maintain in large quantities. The Apple products fill that position in the market very well.

We also felt that if we were to outsource elements of the procurement then we could focus on our core skills and we wouldn’t have to be distracted by those sometimes protracted exercises in chasing down multiple vendors, because the laptop program includes peripherals as well as the core product.

And for the younger students?

Patrick: For lower primary, we have a two-to-one iPad program – one device to two children. We have a one-to-one in Year 5 through to Year 12. We allow MacBook Pros as a standard entry machine.

What technology were you running before this rollout?

Patrick: We had Dell laptops. We tried a number of different formats. We also had Fujitsu tablet PCs. There was a trend to work with those, mainly with the teachers, who were exploring the idea of a tablet. The students had the Dells, which were just a standard laptop.

What were the first Apple models you started with?

Patrick: In 2010, when the DER [Digital Education Revolution program] was launched, we went with plastic, white MacBooks, and they worked really well. Then we decided that we needed some more oomph, so we then went to the MacBook Pro. We made sure the teachers and the students had the same devices. We thought that was important. There was an equality there and an equity issue. Students felt valued.

Patrick: It would have been 2011. We’ve maintained that fleet until this year where we’ve split it. The technology image, which requires Bootcamp, is more suitable for the MacBook Pro and we upped the RAM to enable better performance.

Then we made the MacBook Air the standard ‘vanilla’ SOE for most students. They’re all 13-inch devices, which is a nice point of access.

Was it a full refresh for all students?

Patrick: We have two cycles in our rollover. Every year we do half the school. We’ve chosen a two-year cycle because it maintains the resale values so it reduces the total cost of ownership on those products; again, it makes the child feel like they’ve got something special; and the staff and the students are up to date with the latest technologies.

Next: Infrastructure behind the scenes