Can Windows 10 win over the enterprise? 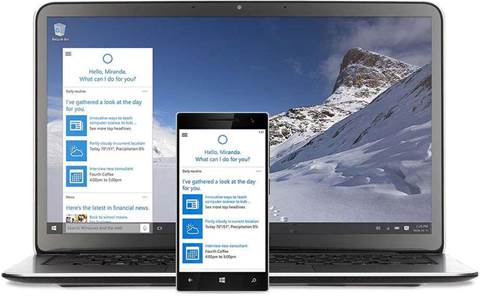 Windows 10 launched globally overnight and is officially available for purchase or free upgrade in Australia.

With the operating system, Microsoft is trying to right the wrongs of Windows 8. And it has. Windows 10 bridges the gap between the traditional PC running Windows 7 and the world of touch-based tablets, something that Windows 8 was never able to accomplish.

Microsoft has unified the computing experience across devices. It has transcended just one desktop platform -- be it tablet, PC or smartphone -- and becomes the universal OS that Bill Gates had talked about for decades but was never able to deliver.

While linking Windows 7 to Windows 10, it keeps what's good about Windows 8 and leaves out the rest. Think of it as Microsoft's version of OS X Yosemite, Apple's bridge of the Mac OS and iOS.

The challenge for Microsoft, as it pushes its software/Windows-as-a-service agenda, leverages its Azure cloud services and competes against Apple and Google in the mobile space, is to not just survive, but thrive.

Lose the OS battle and risk losing the war.

But many of the solution providers CRN USA spoke with say they still have a bad taste in their mouth from Windows 8. They are in no hurry to migrate to Windows 10.

"The chart of Windows desktop adoption I’m looking at isn't going up and to the right, it's going down. Mac OS, iOS, Android and Linux are all growing. Microsoft should worry," said one Microsoft partner who asked not to be identified.

Microsoft is trying to reverse that type of thinking. As it struggles to foster a mobile platform, adjust to declining PC sales and streamline the delivery of security patches without causing hiccups within the enterprise, it hopes Windows 10 will turn things around.

Windows 10's marquee features are the return of the Start menu, a massively improved user interface that harkens back to Windows 7, Microsoft's personal assistant, Cortana, and the fact that it's essentially free.

Using the phrase "Hey, Cortana," users can summon the digital assistant and ask it to hunt down directions from Point A to Point B on a map. Cortana also can perform a host of Bing searches, such as "What's the weather for today?" and "Who were Chris Pratt's parents?"

Some OEMs such as Toshiba will build Cortana buttons into their upcoming Windows 10 laptops. Other OEMs such as Lenovo are leveraging Cortana with their own technology to create hybrid search services. Lenovo is using its own ReachIt search technology in conjunction with Cortana to allow people to search all their Windows 10 devices at the same time for files and documents.

Microsoft hopes to drive businesses to Windows 10 Enterprise edition. The bait is all of the above, plus vastly improved mobile device management capabilities, better security and simpler sign-on and authentication through the cloud-based Azure Active Directory.

For starters, Microsoft has added two-factor authentication support in Windows 10 Pro and Enterprise along with a data loss prevention technology.

In an attempt to separate corporate and personal user data across multiple Windows 10 devices, Microsoft will allow IT managers to encrypt corporate apps, data, email, web content and other sensitive information on Windows 10 desktops and mobile devices.

Admins will be able to set policies around which apps and corporate data can be accessed. And in an attempt to fend off malware and zero-day attacks, IT managers will be able to lock down Windows 10 devices, allowing only users that have been digitally signed by a trusted Microsoft signing service to run specific apps.

The feature is called Device Guard and Microsoft already has support from Acer, Fujitsu, Hewlett-Packard, Lenovo and Toshiba, which have pledged to use the technology on their Windows 10 PCs and devices.

Then there is Windows Update For Business, Microsoft's name for its new approach to patch management. No longer will businesses have to wait for periodic patching (aka Patch Tuesday) -- now updates will be delivered continuously.

For companies concerned about being stuck with a faulty fix or one that introduces incompatibilities, Microsoft hopes to solve that problem by offering a "distribution ring"-based model so companies can decide which PCs get updated first.

Microsoft also will offer maintenance windows, allowing business to decide when updates can or should occur. It will support peer-to-peer updates as well, which will allow PCs in limited-bandwidth offices to distribute updates among themselves instead of each PC downloading updates separately.