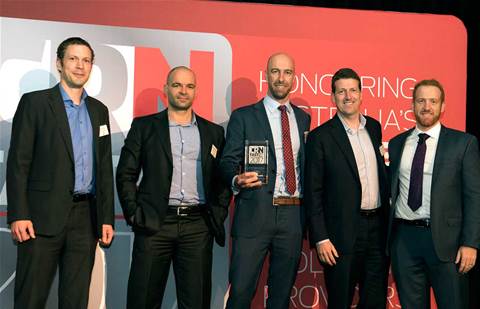 Melbourne’s Basis Networks started in 2015 with the goal of establishing a small, customer-led networking provider with the capabilities of a large services provider.

Since being established by founders Tom Allan and Anthony Collings, Basis Networks has gravitated towards cybersecurity, which now makes up between 70-80 percent of the company’s work. It’s a strategy that’s paid off for the company, which grew revenue by 167 percent last year and placed No.4 in the 2017 CRN Fast50.

“We’ve always been a networking company, being Basis Networks, but intrinsic in that has always been security,” Allan tells CRN.

“We used to be a lot more focused on traditional network security. Now when we talk about cybersecurity, that just means it’s a much broader range of security offerings that we have, which enables us to go out and do things, like doing the entire lifecycle from going out and doing assessments up to helping remediate customer environments.”

Basis Networks has productised its cybersecurity assessment procedures, which Allan said had provided some customer leads as well as a raft of new services it can take to market.

“What we’re finding in the market is people have more budget to spend on their security so what we came up with is something which has a defined engagement, to go out there and analyse our customers’ environment and give them valid and prioritised recommendations so they can improve their security position, but also remediate and improve the way they deal with potential security breaches going forward as well.”

Basis Networks doubled its staff headcount in the past year to 15, expanding its sales team and bringing on consultants, along with streamlining some of its internal processes to make way for future growth.

Expanding the sales team has been a relief for Basis Networks’ two founders, freeing them up to move away from account management and back on to growing the business.

Thanks to the extra resources, Basis Networks began working on what it calls future state architecture development for its larger customers.

“We look at what strategies [customers have] for cloud, infrastructure, data centre, and develop an architecture that enables them to achieve their business goals over a period of time,” said Allan.

“The cool thing about these is that they take into account not only what the customer has in their environment and what they want to achieve, but allows us to really bolt in some cool emerging technologies and better ways of automating.”

It’s shaping up to be another big year for Basis Networks, having just finished off two long-running projects with some of its larger customers: a security transformation piece and a big data migration project.

While Basis Networks has kept its focus on its home ground of Melbourne, Allan said the company would look to expand its presence in Sydney over the next 12 to 24 months, having already racked up a handful of customers in NSW.