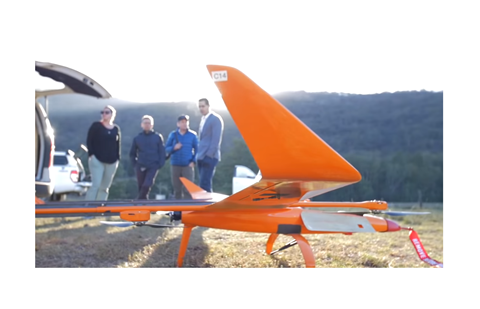 The Digital Owl preparing for takeoff

Acacia Dangarensis is a ten-metre tall variety of wattle that is found in just one national park in New South Wales. The trees are critically endangered: just 1,750 are known to exist.

That scarcity means the trees are managed under the New South Wales Office of Heritage and Environment’s (OEH’s) Save Our Species program, which aims to gather data so that management plans can be designed and implemented to preserve at-risk species.

But Acacia Dangarensis is hard to observe: they’re surrounded by other trees and the Goulburn River National Park has only three entry points for vehicles.

Helicopters are one way to get a better look at Acacia Dangarensis. However such craft aren’t cheap to operate and rather spoil the vibe of a national park!

Enter Fujitsu and the “digital owl”, a battery-powered drone equipped with video cameras and the Fujitsu-developed, cloud-hosted Zinrai artificial intelligence platform that can analyse video well enough to pick out Acacia Dangarensis among other plants.

Test flights of the digital owl quickly proved that using a drone to identify plants can work. Analysis of video identified Acacia Dangarensis, prickly pears and even a rare type of daisy that hadn’t been observed in the wild for over a year.

To test the accuracy of the analysis, a park ranger visited the location overflown by the digital owl and confirmed its observations.

While still in pilot, digital owl’s early successes suggest it could lower daily data-gathering costs by $10,000. Those savings could be put into more observations, or more conservation programs, or both.

Fujitsu told CRN that this project was unusual, because it was experimental and therefore did not involve a traditional customer/supplier relationship. Which turned out to be liberating as both parties were happy to take greater risks.

Alone among 2019 IMPACT Awards entries, the digital owl scored an endorsement from a government minister! Gabrielle Upton, NSW environment minister at the time the IMPACT Awards opened, described as “An impressive project with an exciting outcome, and we love the potential application of digital owl to other problems in the future, and around [the] world. Great public-private partnership! This project stands out as real innovation; it goes beyond using existing tools.”

The project is also notable for being led by a graduate. And for scoring coverage in CRN’s sibling publication iTnews.

Fujitsu is a finalist in the 'Digital Transformation' category in the 2019 CRN Impact Awards. For a list of all finalists and further details on the awards, please head to the CRN Impact Awards hub. The awards take place during the CRN Pipeline conference. You can get more information and purchase tickets here.

Cloud application revenue made easy
By Simon Sharwood
May 16 2019
2:34PM