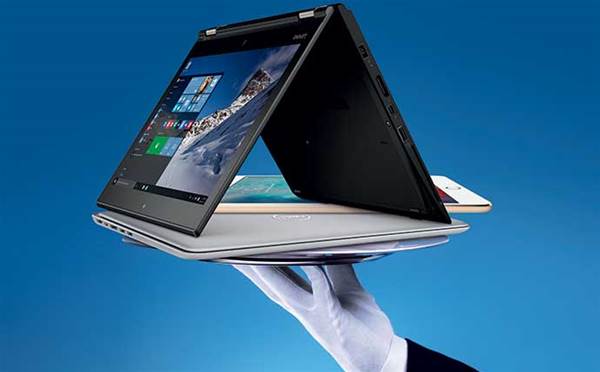 For IT administrators, end-user devices are a necessary evil of modern computing. While more and more organisations are turning to the cloud to reduce the burden of managing backend systems, it is much harder to do the same for the devices staff use every day.

At least, it used to be.

A growing cadre of channel partners and vendors are taking the lessons of the software-as-a-service model and applying them to hardware. If this trend catches on, it could significantly change the way devices are sold and managed.

Device-as-service essentially has the client outsource key tasks such as acquisition, provisioning, management and securing of end-user devices, then paying for those services on a monthly basis across a fixed-term contract. The bundling of multiple services onto a single bill is what distinguishes as-a-service contracts from straightforward leasing. The contract may also offer a degree of flexibility so the client can increase or decrease device numbers to ensure they only pay for what they need, just like cloud computing.

The model received a boost in July when Microsoft announced its Surface-as-a-service program, through which qualified cloud solution provider (CSP) partners can offer Surface devices as part of a managed service, bundled with Office 365 and Windows 10, and paid for through monthly subscription.

But with buyers becoming increasingly familiar with the as-a-service model, numerous channel companies have already developed their own device-as-a-service offering. In May, Melbourne-headquartered Southern Cross Computer Systems announced its device-as-a-service offering, featuring a range of devices including Surface Pros and devices from Lenovo, HP, Dell, Toshiba, Samsung and Apple, along with a range of management services, including procurement, security and ongoing device management.

“We are pretty broad on the device front,” says Southern Cross managing director John Hanna. “This isn’t just desktops. This is PCs, it’s laptops, tablets, and we’ve got options for peripherals. But when we have those management layers kick in is where we find customers get value. With mobility becoming an increasing topic for CIOs with a mobile workforce, the question then becomes, ‘How do I maintain the security posture for these devices?’.”

Hanna says uptake to date has been broad and includes managed service providers who are white-labelling Southern Cross’ capability.

“We range from a law firm with 60 people right up to large-scale national packaging companies and a large global architectural firm with 1500 users internationally,” he says.

While device-as-a-service is grabbing headlines, for some in the industry it’s nothing new. Tasso Mangos, chief technology officer and general manager for cloud and communications solutions at CSG, points to the print side of his company’s business, which has offered the as-a-service model  for a long time. “The whole print industry is essentially a subscription service, which combines the usage and finance model into a subscription,” says Mangos.

CSG’s experiences in print initially led it to create Boardroom-as-a-Service, which bundles touch-enabled displays with Windows 10 and web conferencing solutions as a turn-key package sold on a subscription basis. The next iteration is CSG Total Office, which bundles all of the technology needed by an employee into a packaged subscription service. “CSG has thousands of SMB customers, and we talked to them about their major concerns,” Mangos says. “Not surprisingly they were cashflow, time and complexity.”

Mangos also examined the processes that an employer went through when onboarding a new employee, such as setting up telecommunications and provisioning devices.

“We identified there were six work streams, with multiple vendor services, some capex, some opex, and the warranties were never in alignment,” Mangos says. “All of those onboarding items cost time and money, and there is no consistency, especially in a smaller market. So we bundled and preconfigured a support service around bundle that provides a PC at its core.”

CSG Total Office consists of a Windows 10 device running Office 365 Business Premium, along with cloud storage and backup, a full suite of telecommunications services, and technical support, with customers free to mix and match elements. “They can be very clear about how many seats they have, what their monthly subscription is, and there are no added peripheral costs or a relationship with a carrier,” says Mangos. “Our solution means you can hire an employee and have their services set upin a few minutes.”

CSG Total Office was soft-launched in early 2016 ahead of a formal release in July.  Mangos says the response has been strong, particularly for the communications offering, with the foreign exchange company OFX having adopted Total Office for its telephony requirements across seven countries.

Mangos says the key to Total Office is the finance model that underpins it, with CSG having a natural advantage through having its own finance company. Hence, CSG can model the risk involved in maintaining ownership of components of the hardware.

“We finance for a term that the customer chooses for the subscription service and then we combine the subscription renewals with the hardware, and remodel that to a per-monthly charge,” says Mangos. “The larger it gets, the more flexible it becomes. We retain some of the risk, and depending on the system, they can extend, refinance, and do a whole bunch of flexible things. As long as we stay involved and know what’s coming, we are very flexible.”

Having a dedicated finance team is also a key element behind Computers Now’s device-as-a-service offering. National sales manager Andrew Charles says the as-a-service model is a natural evolution for customers who want to better manage cashflow, but the real value comes through the reduced management overhead.

“We are putting a structure around it that is very enticing to our customers that want to reduce IT headcount and want to maximise the true potential of their IT environment. So they are getting everything they need under one contract with one monthly bill.”

Charles says CompNow’s expertise in finance helps it assess and price risk, with Charles spending six months putting the model together. “The biggest challenge in all of this is educating staff and changing the mindset of traditional IT salespeople to really be able to understand and articulate the value proposition of selling a service-based offering. It is a very different sell to just asking for a purchase order and waiting for the money to hit the account,” he says.

While Microsoft is bringing the as-a-service model to end-user devices, enterprise vendors such as Alcatel-Lucent Enterprise are applying similar thinking to higher-end boxes.

ALE’s senior director of cloud services, Steve Saunders, says the concept of network-as-a-service simply follows the trends of other segments of the market, including the company’s own unified communications-as-a-service (UCaaS). “There is a huge commoditisation in the technologies we and other vendors are bringing to market,” says Saunders. “They are very critical services, but in my view they are utilities like electricity and therefore you should start to consume them the way you do electricity, as a service in arrears, rather than paying for it as cap-ex up front.”

Hence, ALE now offers clients the ability to pay for networking per connected port and per hourly utilisation, calculated daily and billed monthly. Saunders says the model will appeal to organisations that are growing rapidly and want to equip for future requirements but only pay for what they need today.

“We take the risk and we own the asset,” says Saunders. “We model the unit price based on the size of the network and the length of the contract. The unit price per connected port will be higher on a two-year contract for 500 ports than a six-year contract on 5000 ports.”

Saunders acknowledges this is a big change for partners as well, but says declining margins on hardware have meant a development like this was inevitable. “Some partners are addicted to the capex business, and those partners are not the ones who are going to make us successful with network-on-demand, or even with unified comms-as-a-service,” says Saunders.

While the company is yet to sign a client on to the on-demand model, Saunders expects to make the first announcement from Australia soon.

1  Be clear. Customers are sceptical about grey areas around what is and what is not covered by a contract.

3  Use data. Many customers will like a smart monitoring service that predicts usage patterns.

4  Start with existing customers. PC-as-a-service is a new model and you know these customers best.

6  One throat to choke. Suppliers must be single point of contact for financial services, technical support and asset disposal.