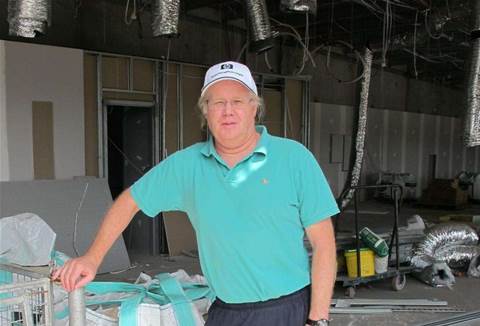 It's a relaxed David Dicker on the phone from Italy, where he is holidaying with family, who keeps telling me there's nothing more complicated to running a successful business than following simple rules.

"We have a very simple role," he says, describing how distributors facilitate the supply and demand chain. But you get the feeling, by looking at Dicker's longevity of 32 years in the industry and a list of milestones, that he might be being a little modest.

You also get the impression Dicker's no-nonsense, buzzword-free manner of explaining himself would sit well with customers who need something, need it now, and need it delivered with a minimum of fuss.

Beginning its business life as an importer of microcomputers, Dicker Data shifted its core activity to keep abreast of the times. Also behind the company's success lies the analytical, methodical mind of a programmer.

David Dicker is a self-taught programmer who started with Basic before moving onto assembler.
"We spent about 10 years in the 1980s trying to build our own general purpose computer," Dicker says.

He has written his own Computerised Trading System (CTS) in Perl, although this project is not directly related to Dicker Data.

The background in programming is also present in the business, which holds a cache of server expertise. "Most people are not aware of this but we have a tremendous amount of in-house server expertise," Dicker says.

"We have a whole shed full of guys who know how to configure servers and sell them to the customer, and this is an important part of what a distributor does."

Dicker says this is an important part of the relationship between distributor, reseller and customer because of the complex nature of server installations.

He describes Dicker Data's role in supporting resellers as more complicated than what distributors in other industries do but that "it all leads down the same path" towards satisfied customers and a profitable business.

According to the boss, Dicker Data's in-house server expertise provides a competitive advantage.

"Business is basically a competition and all you really have to do to be successful is be better than the next guy," he says.

This approach to managing Dicker Data's business has proven effective, with the company boasting a long history in a competitive industry, and there's plenty of room for growth yet.

On the move
Dicker Data will soon be operating from a new facility, located at Kurnell in Sydney, not far from the current office. The new base of operations was, at the time of writing, approaching the fit-out stage and is expected to be operational by April.

Dicker says this will allow for greater efficiency than the current set-up in which warehouse and offices are in separate locations served by a constant flow of forklifts. Time to move it under one roof, Dicker says, and the efficiencies gained will translate into better service.

While Dicker Data is gearing up for growth, Dicker says there's not much innovation at play in the market at the moment. Industry growth is driven by business and consumers reacting to exciting developments; of which, Dicker says, there isn't very much about.

But mention e-readers, and devices such as Apple's iPad and HP's Slate, and Dicker is right on top of the growth potential these devices could foster. The discussion changes pace. "I think these e-readers are going to become ubiquitous in the not too distant future," Dicker says.

"They will replace magazines and other printed matter. I was thinking the other day that what would be a really great product is an e-reader device that could fold out like a magazine and with that you could replace the printed version yet still have a subscription-based model.

"Then the publishers could go back to selling things and get away from the everything-is-free-on-the-internet mentality, which is clearly a bad business model."

Dicker sees tablet devices and the content distribution business model they support as a winning formula. "If I was younger, I'd get into it myself," he says.

Of course, the business potential that's relevant to Dicker Data and its industry partners is what could happen in the server space.

The premise for a boom in sales of server equipment is obvious. While the clumsy distribution of printed media will dissolve, publishers will find another delivery bottleneck in moving gigabytes of data. As network activity grows with the rise of the tablet, so will demand for servers.

The data distribution and delivery business, it seems, is about to ride a wave of growth. The only negative in e-reader devices, Dicker says, is that they're cheap, and thus the low margins mean there won't be quite as many riches on offer.

And speaking of margins, what does Dicker Data regard as the essential qualities of a successful reseller? "I think you only need the same traits in order to be successful at business no matter what industry you're in," Dicker says, in his matter of fact way.

Next page for more on CRN's profile of Dicker Data