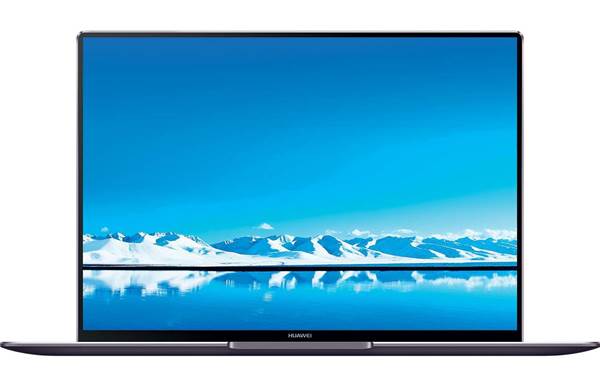 Huawei is at the centre of a geopolitical brawl that seemingly threatens its access to western markets. But that situation appears not to be a distraction to the team that designs its laptop computers, who have produced a very distinctive and interesting device.

That machine in question is the MateBook X Pro, a Windows 10 laptop that deliberately hides its most intriguing feature.

That feature is a webcam that hides under a function key. Press the key and it pops up to reveal a little lens under-
neath. The camera faces upwards and an angle of about 40 degrees, which I feared would make for some great shots of my nostrils but instead yielded very decent and well-framed video and images even though it’s a mere one-megapixel affair.

The laptop needs the popup camera because its 13.9 inch, 3000x2000 screen has a bezel only a couple of millimetres across. That means the screen just-about-consumes the clamshell’s inside, making the 13.9-inch diagonal display feel a little larger than comparable laptops. The screen is also vividly coloured and bright, and handles ten-point touch and video without slowing down thanks to an 8th Generation Core i7-8550U and NVIDIA GeForce MX150 with 2 GB RAM. There’s also a Core i5 option with Intel graphics.

The stereo speakers had the limitations of most small units, but didn’t notably struggle in high or low registers.

It’s hard to make a laptop stand out these days – the conventions of the clamshell don’t allow for startling variations. The MateBook sticks to the basics with a design that doesn’t so much nod to the MacBook Air as pay homage most of its best features, like the big trackpad, no-nonsense grey metal finish and economical array of ports - one USB-C for power, one USB-C-as-Thunderbolt, one USB-A  with USB3.0. The review unit we tested also shipped with a USB-C to VGA, HDMI and USB-A dongle, a nice inclusion given that’s an optional and pricey extra for most laptops. The power brick was pleasingly small but didn’t have an Australian plug, instead offering a US-to-AU adapter. Hopefully Huawei sorts that out at retail.

The machine is well balanced and made for easy on-lap typing.

It’s not perfect: battery life stretched to about five hours while streaming music over WiFi, which is a bit sub-par. The 3000x2000 resolution is an oddity that denies access to 4K content and makes for weird letterboxing of other videos.

But overall this is a laptop to like. Windows 10 didn’t glitch or hang any more than usual during our few days working on the machine. At 1.3kg and 14mm thick it wasn’t a burden. A 256GB SSD and 8GB RAM aren’t generous, but also aren’t an impediment.

Price may be an issue – the Core i7 starts at $2599, a price that’s a couple of hundred dollars beyond the safety-first option of a Lenovo X1 Carbon. But that machine is now in its seventh generation. For the MateBook’s first-gen machine to be worthy of comparison shows that Huawei’s made a bold stride into laptops. Its next moves – if geopolitics allows them to be seen here – will be worth watching. And the MateBook is already worthy of consideration if you’re shopping for a lightweight but pleasingly large-screened business laptop.