Hands-on: iPad vs Surface Go (vs a normal laptop) 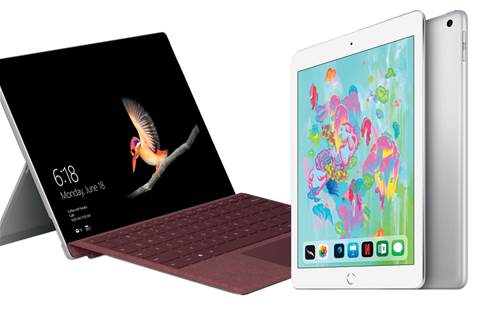 Apple bills its current iPads as “Like a computer. Unlike any computer”. So I decided to test if it can replace a laptop computer.

The iPad’s on-screen keyboard consumes half its screen and lacks arrow keys, making it a terrible laptop replacement without an external keyboard. I added the Logitech Slim Folio, a $160 Bluetooth keyboard and case, which made it usable.

iOS has improved markedly in terms of allowing access to files, so I was able to quickly connect my preferred cloud storage lockers and access documents as easily as I do on a full PC. Word and Excel for iOS have no learning curve. But browsers on the device couldn’t render some web apps properly, which was a hassle.

The current generation iPad supports the Apple Pencil, which now has all sorts of newly-refined pressure-sensitivities and other tricks. As someone whose job is producing text and sharing it in pretty rigid workflows, I found it irrelevant – there’s no advantage for me to make edits using handwriting rather than typing. So overall, a handy but imperfect laptop replacement,

While I was testing the iPad, Microsoft released its competitor to the device, the SurfaceGo. So I tested it, too.

The Go runs a modest Intel Pentium CPU and was rather less slick than the iPad, due to slower performance and Windows 10 just not being tailored to tablets and therefore requiring some finicky tapping of teensy icons.

Microsoft’s keyboard was even smaller than Logitech’s Folio and nowhere near as stiff. That meant on-lap typing was hard as the device wasn’t steady.

The Go runs Windows 10S, the version of Windows that can only access apps from the Windows Store. That was a hassle, because I prefer Chrome and it’s not in the Microsoft Store. It’s possible to exit Windows 10S mode and access other apps, but that’s a chore sure to scare many users.

Inexplicably, the Windows 10 email client could not connect to CRN’s Exchange Server, despite multiple others on iOS and Android doing so without a hitch.

Battery life was fine, at a solid five hours.

The Go wins on expandability as its USB-C port offers more out-of-the-box possibilities than the iPad’s Lightning slot. The Micro SD card reader is also handy.

I preferred the iPad in the end, mostly on grounds of speed, comfort when typing and camera quality.

But I also emerged from my tests feeling that neither is a satisfactory laptop alternative and that a comparably-priced PC would be a better bet for the kind of keyboard-intensive work I do.