Haulin' apps: Why disties are going nuts for cloud 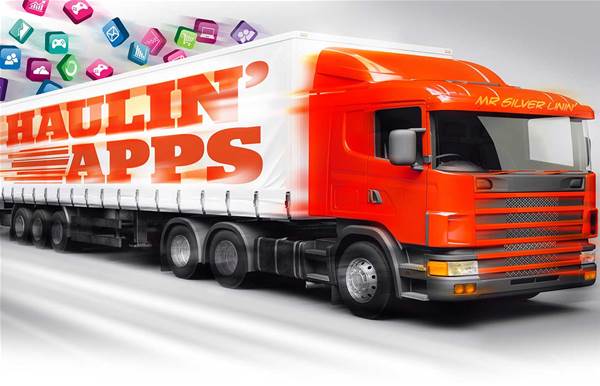 If distributors exist to offer services that no-one else can provide (or, perhaps, want to), then chief among those would be warehousing and finance. So in a cloud world, where fees are paid as subscriptions and there is no product to warehouse, traditional distributors should have no place – right?

Apparently not. Australia’s distributors are quickly building their own place in the cloud channel, and adding vendors at a rapid rate. And for some, that role is actually not so different from the one they have always played.

According to Rhys Shannon, Westcon-Comstor’s director for cloud and service solutions, the key role for a distributor in the cloud is enablement – a role that Westcon-Comstor has long played through its work as a value-added distributor.

“The role in this market is very similar to what it has traditionally been for us with emerging technology,” Shannon says.

“You are taking partners from various level of competency through to general understanding, and then on to specialisation and an advanced capability.

“In some cases we are having to act as the vendor, and provide hygiene around pricing, channel negotiations, setting up partner agreements and helping develop partner onboarding strategies. That role is very traditional for Westcon-Comstor, where we have always been a part of that space.”

Nick Verykios has been in value-added distribution for more than 20 years, through firms including 1World Systems, LAN Systems, Distribution Central and now as managing director at Arrow ECS.

“We are the guys who can legitimately translate the technology message into what a reseller wants to sell their customer,” Verykios says. “We have always done that.

In some ways the rise of the cloud is repudiating the arguments made against value-added distribution in the past, which didn’t value services such as training and support.

“Now, because nothing comes in a box, what you have to value is training and service and everything else,” Verykios says.

For traditional resellers, however, the cloud world requires a significant transition. Shannon says much of the work of his team is in helping these organisations adapt to new revenue and support models.

“One of the things we are really focused on is helping partners understand all the different areas where they can maximise their profit,” Shannon says. “And that is one of the great areas where we can add value, because there is a continuous sales cycle in cloud, and multiple areas where you can position your products and help customers optimise their spend and increase their profitability. It’s a sticky relationship, and it is one that builds mutual benefit.”

While the warehouse might no longer be a requirement, the need to have cloud vendors assembled in one place is still relevant. It just happens that place is online, in the form of a marketplace.

Shannon says Westcon-Comstor’s BlueSky platform automates much of the procurement and provisioning services across a range of cloud services, simplifying tasks such as usage monitoring and licence renewals. And it is not just BlueSky that has been built from the ground up.

“You can only build a capability around an operating environment that allows you to be suitability profitable, and in cloud we are already in a streamlined, optimised environment that is highly competitive,” Shannon says.

“That really required us to build the cloud business from the ground up, rather than building something that was the same people doing the same old thing.

“We had to think and operate differently. We had to invest and set up the models and the structure that we needed to be lean enough and agile enough to respond to the market. And we couldn’t move on a traditional quarterly or annual sales cycle. We needed to be on the continuous cycle of improvement and development to really compete.”

The speed at which some distributors have built their cloud portfolios is impressive. Westcon-Comstor has added 40 apps via BlueSky, with more than 20 more if those on the AWS Marketplace are included.

“I think many companies see long-term success in digital distribution as being linked to their ultimate position in channel as a cloud aggregator,” says Shannon. “At this moment I think it is inconclusive, whether breadth is a critical and/or a winning differentiator versus say vendor mix. However in this market a number of companies appear to be strongly pursuing that strategy.”

Ingram Micro now has more than 20 cloud vendors delivering multiple services in Australia, and its director of cloud services for ANZ, Lee Welch, says there is a large pipeline wanting to onboard their services.

Ingram Micro’s strategy came about more than five years ago, based on the realisation that cloud represented a significant disruption for the whole channel.

“That insight has been a fundamental pillar of our strategy since then, and we are now helping the channel transform to cloud models,” Welch says. “A lot of vendors didn’t have a SaaS solution, and it wasn’t until they worked with us that it made sense for them to build a SaaS offering and then deliver it on our marketplace.”

Welch says vendors realise a marketplace is a cost-effective way to scale globally, and both vendors and resellers recognise having an established everything-as-a-service business increases the value of their company overall.

“The value proposition is to integrate your services on to our marketplace, and then we can essentially launch in any one of our 45 marketplaces around the globe,” Welch says. “And that is a huge value proposition. The growth that I am experiencing is phenomenal. It is starting to become a significant part of our global business now.”

To date Ingram Micro is managing upwards of 25 million seats, supported by a team of 700 engineers.

That marketplace is also available for third parties to use as the basis for their own cloud marketplaces – something Welch says has proven popular particularly among telecommunications companies.

“Our vision ultimately is to enable partners to participate in and monetise an ‘anything-as-a-service’ economy,” Welch says. “As new as a service model develop, such as hardware-as-a-service, we are ready for them and are driving the research and development into these models.”