How a Sydney reseller deployed wifi for Terry White Chemists 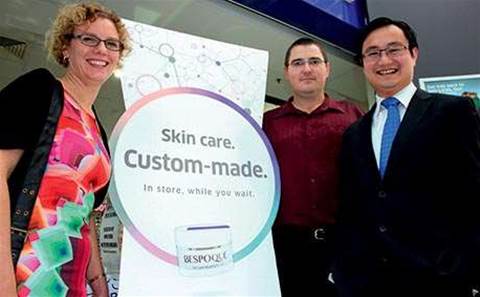 Terry White Chemists needed a partner to install new customer-facing electronic kiosks into its franchise pharmacies all over Australia. Tony Yoo sat with CIO Jane Sheehy, technical services manager Rob Coulstock and PicNet’s support services manager David Booth to find out how the Sydney reseller – including the general manager – travelled to all corners of Australia to get the machines up and running.

What are the new kiosks?

Jane Sheehy: Terry White has a customised skincare solution called Bespoque that’s only available in our pharmacies. The interactive kiosk has a large touchscreen that allows the customers to describe their needs and design their own skincare solution.

There are sample jars at the kiosk that allow customers to check the texture. They can select the active ingredients, features and benefits they want. Particular skin conditions – like redness, large pores, fine lines, wrinkles – can be inputted and the kiosk makes suggestions to them.

After the customer puts in their details, they go to the counter to place their order. The order details are sent to the back of the shop and a pharmacy assistant makes the cream on the spot, within five minutes.

The customer can choose what goes on the label. The system prints the ingredients on the side of the box and puts it into beautiful packaging – so it matches other prestige skincare brands in presentation but it’s absolutely unique for each customer.

It sounds like the data has to travel to a lot of places.

Jane: Yes, that’s right. It was an interesting project because it touches multiple points in the pharmacy. So obviously getting that kiosk reliably connected was key.

We didn’t have wi-fi in our pharmacies. We did have WAN links that services the Terry White TV network, but wi-fi is something that we’ve been wanting to do for a while. There have been similar opportunities where we wanted to do just digital installations quickly in a pharmacy, but when you start tallying up the cost of cabling it just ends up being prohibitive.

We then needed a partner who had the capability to handle a national rollout in a six- to eight-week window.

How did PicNet and Terry White find each other?

Jane: We had an existing relationship. We had this very short timeframe for rollout so we really wanted to leverage the partners we knew and could trust.

PicNet had already been providing support services to us to our wholesale distribution centre in Silverwater (western Sydney). They’ve been providing on-site support and remote support for that site for almost two years now.

David Booth: The existing relationship had nothing to do with wi-fi. It was completely unrelated.

We wanted a partner where each of the employees cared about the outcome, especially because we didn’t really know exactly what we were going to find in every single pharmacy.

What were the technologies and vendors involved in the project?

David: We looked at a couple of vendors in the beginning – Cisco and Aruba. We put out feelers to those two suppliers through our existing relationship with the distributor. Aruba was much quicker to come back and much more positive about being able to work with us.

Aruba said that they had done a lot of these retail rollouts before. I think they’d done KFC, McDonald’s, and some clothing outlets, so straight away they could recommend the hardware that we probably needed.

Rob: Initially, we looked at having everything cabled because that’s usually a little bit more reliable than wireless, but from a logistics perspective and a cost perspective, it just wasn’t viable.

Each of our pharmacies is individually owned and we need to work around, and work with, the franchise owners as much as possible. If we go in and say we’re going to start drilling things into the wall, mounting stuff on the roof, climbing through your roof cavity and running cables, they’re probably going to be a bit more resistant. This compares to wi-fi, which allows us to say, “We’re just going to put this out of sight, out of mind, we’re just going to slot it in behind the system where no one can see it, and it’s still going to work.” It was important that we were as flexible as possible with the installation process.

In terms of the actual wireless device, my initial thoughts were let’s go Cisco, because Cisco is basically the gold standard. But after speaking with David and PicNet I was convinced that Aruba was essentially more cost effective while still offering almost exactly the same features that we needed. Certainly from a reliability perspective, we’ve had no dramas with them at all.

From a setup and ease of management perspective, they’re very good as well. We have complete visibility over the wireless network, right down to being able to link individual wireless access points with floor plans of each individual pharmacy; so we could see where the wireless access points are in the pharmacies, we can see if one’s gone down, and we can remotely reconfigure it – it’s really quite a flexible system. PicNet brought that to the table. I’d never heard of Aruba before, so that was good.

Was the timeframe a huge challenge for everyone?

Rob: It was certainly an aggressive timeframe. We essentially rolled out across over 100 pharmacies within a six-week timeframe over April and May this year. I can laugh about it now.

Jane: And there were really tight dependencies as well. You can never have empty space on a retail floor, so the pharmacies had to make space for the unit, which was quite a challenge. The shop-fit team were running around making that space, and then the day the spot became available the unit had to come in. When the unit came in, the wi-fi had to be ready. But we wanted the wi-fi to arrive at the same time as the unit, so we knew that when we left the pharmacy the unit was there. And then we had the training team coming in the day after, so if there were any stuff-ups you had one day to sort it out. You couldn’t go back to try and fix it, so the dependencies were tight – the training team were also travelling the country.

Rob: But of course, you don’t have a whole day to sort it. It’s easy to say you’ve got the next 24 hours to fix it, but the PicNet technician has three other pharmacies to do that day, so he can’t really sit still for eight hours fixing the problem. So I’m sure David would agree it was quite a challenging timeframe.

Tell us about the other big challenge – geographically you had to work in lots of very diverse sites.

Rob: We have a pharmacy in rural Western Australia that’s seven or eight hours from anything. It was a seven-hour drive from the nearest major town.

Jane: The brief was to get coverage to a particular spot in the pharmacy where the kiosk was, but we got the guys to do a site survey at the same time. We wanted to maximise coverage of the pharmacy to try and give flexibility for future projects as well. It was a tricky brief. They were wandering the country not knowing precisely how many access points they’d need, because with some pharmacies you can’t just tell from the size of it.

David: Some pharmacies were square and fairly easy to cover, but there were some long stores, triangular stores, all sorts!

Rob: It also depends on the [foot] traffic. For example, at the Myer centre, the pharmacy itself is not abnormally large but there’s such high traffic and so many other wireless devices already in that area. In a case like that the wireless requirements could be completely different, even though the pharmacy might have the same physical layout as another branch.

David, the PicNet office is in northern Sydney but did you go all the way out to the remote outback of Western Australia?

David: Yes, it was a full company effort. When necessary, we sent out some senior engineers and even the managing director [Marco Tapia] went out to some sites. It was all hands-on-deck to get it done within the timeframe.

Jane: We did have a fairly major wrinkle in the early stages…

Rob: At the start of our rollout we had an issue with the wireless inside the touchscreens. It wasn’t as reliable as we had hoped. In the end, we narrowed the problem down to the wireless facility within the kiosk itself. We said, “We don’t have time to replace all these touchscreens – we have to go ahead.”

What did we do? We ended up putting dongles into the touchscreens, which added to the work that PicNet had to do. Initially I’d given [PicNet] a list saying, “You just have to do this, this, this and walk out store.” Now I was saying, “Sorry guys, you’re going to have to actually rip the touchscreen out of the Bespoque unit, put a dongle into the back of it, throw a driver on to the unit, install the driver, configure this and configure that.”

So I threw a whole lot of extra things at them and they were able to take that on and say, yep, no dramas, we’ll just get it done. They were very flexible when required.

You don’t necessarily get that from the big IT providers?

Jane: Not without a major variation.

Rob: It will cost an extra 30 percent, thank you very much.

David: It was important to have engineers being flexible enough to vary from the plan and be able to think on the spot.

Rob: I leaned heavily on PicNet’s dedicated project manager. I’d be talking to the project manager at least two or three times a day when it was really busy. He kept me up-to-date really well. I was very impressed with it.

It really felt like a partnership. We were in this together.

Has the rollout finished in the 100 targeted pharmacies around the country?

Jane: Yes. It wasn’t deployed to the entire franchise network because we have different sized pharmacies, and different formats. The kiosks weren’t necessarily applicable to the really small outlets like neighbourhood and express pharmacies.

David: It was an exciting project that pushed both sides to find solutions to problems that we didn’t expect. It’s been a very good partnership with Terry White.

Jane: Similar sentiment – it was exciting, we’re really proud that we were able to get such a high quality solution out so quickly, and we’re very grateful to all the partners who helped us out. PicNet were great. Bring on the next project! Are you ready, Rob?

Job sheet
The customer
Terry White Chemists
Established 1959
Number of locations and where 165 pharmacies all
over Australia
Industry sector pharmaceutical retail
The supplier
PicNet
Established 2002
MD Marco Tapia
Employees 20
Number of locations and where One, at St Leonards, Sydney
Specialties IT infrastructure management, software engineering and IT consulting, with key partners Microsoft, AWS and SAP
The project
Situation New electronic kiosks needed to be integrated into 100 franchise pharmacies
Technology deployed Aruba wireless networking
Outcome Kiosks have been installed into stores without disruptive cabling
Got a news tip for our journalists? Share it with us anonymously here.