How OrionVM took on the might of Amazon Web Services 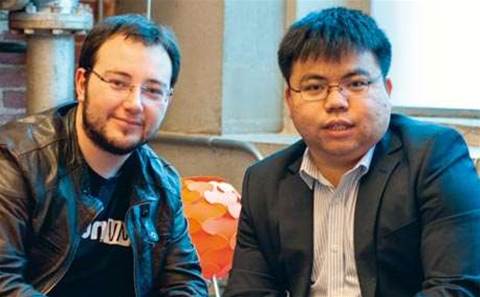 It’s not every day that you meet a company foolish enough to take on the might of Amazon Web Services (AWS), the global infrastructure-as-a-service company owned by the empire of tech wunderkind Jeff Bezos. But then again, OrionVM is an exceptional case.

It has all the hallmarks of a giant killer. Let’s run through the list:

One, highly talented founders who started the business at a ridiculously young age. Check.

Three, backing by a legendary figure of the interwebs. Check, check and check.

Some four years ago, Sheng Yeo and Alex Sharp hatched the idea of building an IaaS company using a completely different tech blueprint to any other. They were just 21 and 18, respectively, still at university. Instead of centralising storage in SAN for hundreds of virtual servers, they decided to build the storage into the server itself by emulating the massively parallel design of supercomputers.

And each component was tied together with Infiniband, the ultra high-bandwidth networking standard used in all supercomputers.

It took several years to write the software that made their blueprint a reality. OrionVM (with offices in Sydney and San Francisco) offers similar services to AWS: virtual machines running a range of operating systems, as well as super-quick or slow archival storage.

One of the secrets to OrionVM’s success is that one of its investors is internet legend Gordon Bell, former head of DEC and one of the engineers who signed off on the Ethernet and MAC address standards, Yeo says.

Bell has been heavily involved with parallel computing; in fact, the annual Gordon Bell prize is awarded to outstanding achievement in high-performance computing applications. Bell introduced Yeo and Sharp to contacts in supercomputing who helped guide the design process.

Efficiencies in design equal efficiencies in cost – making OrionVM a very attractive option. The cost difference allows OrionVM to take a shot at the “nice myth” of Amazon’s cost model.

“Amazon is very cheap to get started but once a customer hits $50,000 a month, or a quarter of a million dollars a month for terabytes of memory, it’s much cheaper to have your own platform,” Yeo says.

Yeo says OrionVM can sustain a price point that is 60 percent below AWS’ advertised rates. Luckily for resellers, OrionVM’s initial foray into direct sales was short-lived and the company is now 100 percent channel focused. It sells white label services for its IaaS supercomputer and counts AAPT, the NSW government and D-Link among its customers.

For resellers thinking of signing with Amazon or Rackspace, OrionVM is tempting them with much healthier margins. “A lot of our competitors say you can make five to 10 percent reselling their services, but we are 50 percent to 60 percent margin. We are cheaper than building your own [IaaS service] any day,” Yeo says.

“For anyone who has their own support team, we give them a good amount of margin and they can take it to market and sell it.” Some partners are selling VMs and competing with Amazon on price, but most are adding other services as well.

Partners include MSPs, telcos and PaaS and SaaS companies such as Equinix, Cumulus Networks and Mellanox Technologies.

“Wholesale cloud is a really big part of the market that hasn’t really developed yet. If you look at the IT services space, there’s a very big group of people who want to deliver cloud but they don’t have the capacity to do it themselves,” Yeo says.