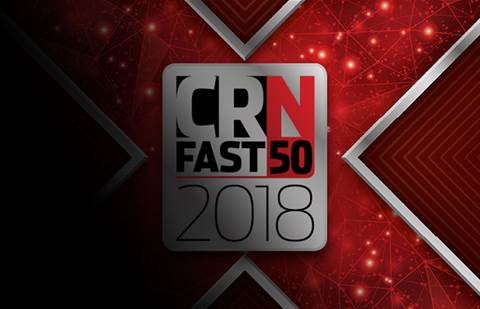 A decade may as well be an eon in the information technology industry, which evolves so quickly that only the strongest business models – and, for that matter, businesses – survive to celebrate double digits. So it is a great pleasure we recognise the 10th birthday of the CRN Fast50.

People tend to slow down with age. Likewise, business growth tends to ebb as companies become larger and more mature. Not so the CRN Fast50: the awards are only getting quicker. This has, once again, been the fastest year in the history of the awards. The average growth rate was a full-throttled 87.1 percent, up from 85.3 percent last year. It is staggering to think that the threshold for entry into this year’s list was a massive 37 percent year-on-year growth. For most companies, that pace of expansion would be a champagne year. Among this group, it’s par for the course.

With stratospheric growth of 452.35 percent, this year’s No.1 company is Barhead Solutions. The Sydney-based CRM and SaaS specialist boarded the business applications train just as Microsoft was re-invigorating its Dynamics platform for the cloud era, and has not looked back. Barhead surged to $11.1 million of revenue in just its third year in operation.

The fifty companies in this year’s awards generated total revenue of $567.3 million for the financial year to June 2018. They employed more than 2,000 staff. The largest company on the list, Cirrus Networks, turned over a cool $76.1 million. This means Perth-headquartered Cirrus is awarded the Leader Award in the CRN Fast50 honours.

We know it’s extremely exciting for those companies that have achieved their first-ever berth in the CRN Fast50, and we’re thrilled to welcome 24 first-timers this year.

By the time most of you read these words, these businesses will have already celebrated their win at our annual awards night and gala dinner in Sydney. It’s one of the highlights of the year for many companies, and another compelling reason to consider submitting an entry for the awards next year.

Last year, RIoT Solutions was our first-ever Queensland winner of the CRN Fast50, having grown at 343 percent to $6.7 million. This year, Barhead Solutions brings the gold medal back to New South Wales. In fact, NSW companies – from Parramatta to Sydney to Wollongong – dominated the upper rankings, with five of the top 10.

But while the ‘Premier State’ took the No.1 place and hogged the top 10, Victoria yielded the most companies overall, with 21 businesses hailing from down south. Victorian companies were worth $212.8 million, or 37.5 percent of the revenue in this year’s list. Some 16 companies were headquartered in New South Wales, five in Queensland, four from the ACT and two apiece from South Australia and Western Australia. 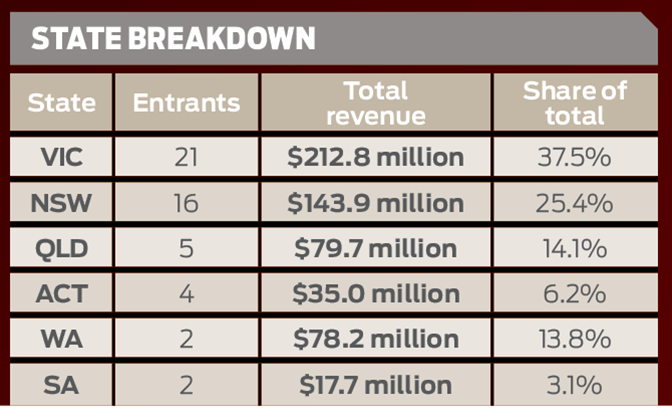 With 24 first-timers, that leaves another 26 repeat appearances in the CRN Fast50. This is a huge achievement, and far from easy. As the benchmark for qualification gets higher, it becomes more challenging to cement a place in the awards.

Of the 26 companies on the list appeared before, 19 made it last year. Achieving this level of back-to-back growth shows their 2017 success was no fluke. Hats off to the four companies that have placed three years in a row: Araza (No.9), Solista (No.14), Adactin Group (No.2) and Calibre One (No.47).

Another data point worth recognising is that three former CRN Fast50 No.1s managed to clinch a repeat appearance this year: 2015 winner Sliced Tech, 2016 winner The Missing Link Security and 2017 winner RIoT Solutions. That has never happened before.

By measuring companies on year-on-year revenue growth, the CRN Fast50 will naturally lean toward younger companies with smaller revenue: growing at rapid speed, in purely percentage terms, is easier from a low base.

However, each year a number of companies act as the exceptions to this rule. In 2018, we have 10 companies more than a decade old. This year’s oldest company isDanet Technology (No.33), a Fast50 first-timer from New South Wales that partners with Microsoft and Dell.

Araza is also one of the few companies on the list, once again, with a woman in a top leadership position. There is increased scrutiny across all industries – and the tech sector in particular – about lack of diversity, especially in management roles.

The CRN Fast50 is evidence that the channel has a long way to go. Of the more than 100 company directors and leading executives who run these fast-growing Australian tech providers, just 12.4 percent are women. And only two CRN Fast50 companies had a woman in the CEO’s chair (Araza and Tquila ANZ).

This is not just an issue for resellers – the lack of diversity is not much better on the vendor side of the channel: just 20 percent of the executives in CRN’s recent ‘Channel Chiefs’ special report were women.

We ask every entrant to provide data on the vendors and distributors that supported their success.

Once again, Microsoft came out on top as the most popular vendor. Some 13 companies on this year’s list said Microsoft was one of their major vendors. Next came was followed by Amazon Web Services, Cisco, Fortinet and Palo Alto Networks, all popular vendors that shared joint second place.

In terms of overall revenue, identity and access management vendor Ping was top of the table. This unexpected result can be explained due to Ping’s importance to Versent.

With revenue of $54.5 million, Versent was the second-largest company on the list hence its close alignment with Ping skewed the data. Less surprising is the position of Cisco as the second most valuable vendor in revenue terms, and Microsoft as third. Both of these tier-one vendors saw revenue from a broad spread of channel partners among the CRN Fast50.

Dicker Data was named as the most important distributor, followed in order by Ingram Micro, Arrow ECS, rhipe and Synnex Australia. 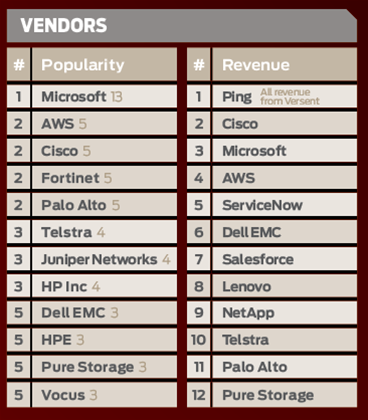 How they did it

While it’s interesting to slice and dice the demographics of the CRN Fast50, of perhaps greatest interest is to try to understand how these businesses achieved their rapid growth. To analyse this, we segment the companies by their product and services mix, as well as their target customer markets, and vendor and distributor partners.

Most of the revenue in the CRN Fast50 comes from services, which many companies wrap around a hardware or software deployment. Nearly 70 percent of the revenue in this year’s group came from services, with just over 20 percent from hardware and under 10 percent from software. This also reflects a change in the way IT is delivered to customers. Cloud means much infrastructure and software is now delivered as a service, blurring the traditional lines between product reselling and delivering services.

Another way we see cloud impacting the revenue mix in the ICT sector is the increase in demand to connect to the cloud. The Australian telecommunications market remains a dynamic sector, and some of the upstart telcos looking to rattle the market leaders have secured positions on this year’s list. This explains why ‘carrier and telco services’ was the second-largest revenue category among the CRN Fast50. Fone Dynamics (No.26), More Telecom (No.39), Spirit Telecom (No.45), Encoo (No.29) and Over the Wire (No.36) all focus their services around carriage, while generally offering a diverse mix that goes far beyond just plumbing.

Software development was also a major category among this year’s group. This was led by companies such as Transpire (No.27), Engage Squared (No.38) and Adactin Group (No.2), which all work with customers to build apps, test software and provide data analytics. 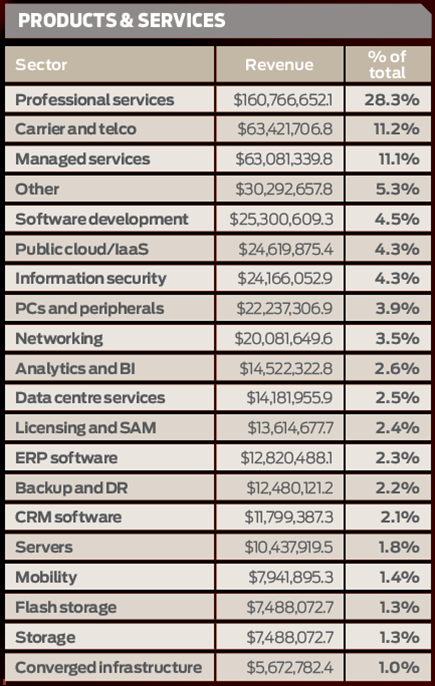 Midmarket and enterprise business represented a near-even split of revenue among the technology providers on this year’s CRN Fast50. Midmarket customers, from 50 to 1000 seats, were worth $181.2 million, and enterprise worth $176.5 million.

Some 16 companies won more than half their revenue in the enterprise, including the likes of Araza (No.9), Enable Professional Services (No.23), Ploy (No.44) and Katana1 (No.22), which were weighted heavily toward the top end of town. Meanwhile, government customers represented $91.1 million of business, thanks to public sector specialists like BCT Solutions (No.5), Sliced Tech (No.49) and Secure Bits (No.8).