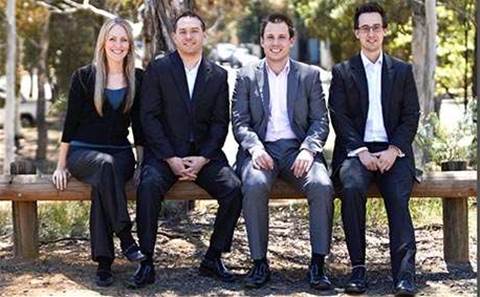 Michael Hazilias clearly didn’t go halfway on his schoolwork. His final-year university project in 2005 – an online payroll app – didn’t just win him first class honours for the then-impressive feat of running on mobile phones. Hazilias and his business partner have turned the app into a company with 400 business customers and 30 channel partners managing 20,000 staff between them.

“It evolved into an end-to-end workplace solution, from rosters to award interpretation and payroll,” Hazilias says.

How did the software engineering student do it? By focusing on trusted advisers and solution providers, although not the IT kind. HRMWeb’s partner list includes accountants, bookkeepers, payroll companies, business consultants, business transformation specialists and other software vendors.

Some partners want to resell the service; others need to keep HRMWeb on as an adviser. “We are flexible – we focus on what’s a win for the partner and for the customer,” Hazilias says. The requirement to be a partner is minimal; some might bring on two to three clients a year.

The company covers industries with high numbers of employees, such as retail, hospitality, health, services and labour hire. Customers employ from 10 staff through to over 800 (the average location has about 35 staff).

HRMWeb is an unusual type of software business: it uses the tool as part of a consultancy sale. The company handles everything about staff and is not afraid to get involved in its customers’ internal operations. It helps optimise management processes, tracks time and handles compliance, which is obviously the biggest aspect. Businesses are keen to outsource their payroll because it’s complicated and the fines for incorrectly paying staff are relatively high. Penalty rates in particular are difficult to calculate. One customer, paying a loaded rate instead of the award wage, realised it was spending tens of thousands of dollars more a year than was required.

It’s a great example of how a single process – carrying out payroll – can touch so many areas. HRMWeb uses the payroll data to understand and control labour costs, reduce administrative time and free up resources to grow the business.

“It’s about streamlining and automating as much as possible. We go into detail of workflows, knowing who is most suitable to work a given shift,” Hazilias says.

The app uses an algorithm to determine the right person for the job by examining factors such as proximity to the location of the job, their role, availability, maximum number of working hours, minimum number of shifts, the time between shifts, and so on.

The weighting system compares all metrics for employees and then ranks them top to bottom. HRMWeb has an automatic shift designer that uses the algorithm to fill out a roster with one click.

One customer said the automation had reduced the amount of time setting rosters from five hours to a quarter of that.

The strategy of pushing beyond software to consulting has helped boost revenue in a highly competitive area. There are dozens of rostering programs that cost $20-$30 a month, Hazilias says. However, they lack the features required by the mid-size customers HRMWeb prefers to target.

HRMWeb starts at $9 a month for a bare bones roster plan but most people start at $40 to $50 a month by subscribing to up to eight modules. The company used to sell all the modules as a single solution, but now it can offer a starting point at $4 per employee each month that is comparable to entry-level competitors.

“For under 100 staff, we can deliver a cost effective product but we give them the ability to upgrade as well,” Hazilias says.