How to chart new territory in the cloud 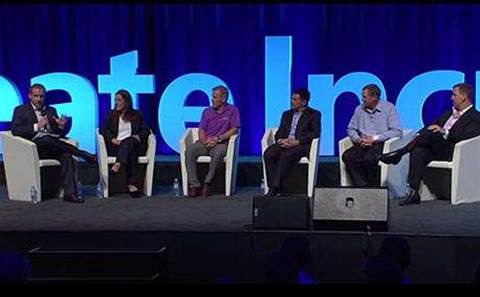 At Microsoft's Australian Partner Conference. CRN editor Steven Kiernan hosted a panel of senior IT executives about how they evolve their businesses to react to change and capitalise on new opportunities.

The theme of the panel was "Charting New Territory - the roadmap that got us here might not get us where we need to go."

You can watch the full-length video here.

Steven Kiernan: I'm joined today by five senior executives from some of the largest, most well-respected and most successful companies operating in the Australian IT channel today.

When I started speaking to Microsoft about hosting this debate, I knew we would need some panellists with real credibility. Having done a few back-of-the-envelope calculations, the IT revenue represented by the businesses here today is about $2 billion in Australia. They employ around 2,000 staff in the country, if not more.

More than the size, the reason I'm hoping you’ll listen to these five people have today is because their companies have shown time and time again that they are able to shift and transition for changes in the market, and that’s the theme of today – charting new territory.

Brian Walshe: I think Dimension Data’s business probably for the last 30 years has been based around infrastructure. I don’t think you need to be a genius to work out the infrastructure market’s probably not going to grow a hell of a lot and most of it’s going to move into the cloud. You’ve probably seen that the direction for us over the last three to four years has been very much around cloud managed services and lately probably some acquisitions moving into the application space as well.

The market is changing. I think everyone on the panel probably is indicative of where the market’s heading rather than where it’s been.

Steven: Making that transition is one thing for a global company like Dimension Data backed by a major international telecoms giant, but how could smaller companies in this room look at making that shift – to move into managed services or annuities? Anything around the Microsoft stack?

A lot of those technologies are going to move into the cloud, so you have to look at the opportunities from a managed services perspective to add value to things like Office 365 and Azure – and how you build a business that’s sustainable rather than just opportunistic.

Scott Gosling: A lot of the disciplines that traditional partners have developed in terms of understanding, release management and how the IT department function works. Those skills still translate. We’re addressing a different type of target infrastructure –cloud – but a lot of the skills that were developed by the more established players absolutely translate to cloud and the new hybrid world.

It’s another opportunity for the established players that have a long pedigree in infrastructure to translate those skills into the new world as well.

Steven: Dave, unlike Dimension Data and Data#3, Brennan has always been in the managed services game. Now managed services is "the new black". So the transition that we're talking about, I figure it might not be such a challenge or Brennan. Is there any advice you might be able to give to those traditional companies – systems integrators, infrastructure companies, traditional resellers – to move into managed services?

Steven: So what’s the risk if companies were to reinvest in their own rig as opposed to look at public cloud?

Dave: We’ve all got finite amounts of capital and you guard it jealously. If you run a big rig already then you know just how much capital it consumes and it’s just relentless consumption of capital. So if you’ve already got critical mass and you’ve filled that rig up and you’re going for stage 2 in expansion, then the numbers probably stack up to do that.

If you’ve not quite got critical mass yet or you haven’t started, then I would really be thinking twice about it and perhaps don’t start at all. Find a wholesale option and go that direction.

Steven: When you run those sums, what does running your own infrastructure look like compared with public cloud?

Dave: It’s tricky to share specifically but it’s about 30 percent cheaper than public cloud right now, maybe a little bit more. It just depends on how you stack it up.

Steven: Nicki, Kloud is the youngest company on the panel and a perfect example of – in Microsoft language – a ‘born-in-the-cloud’ partner. Yet despite being less than four years old, you’re already looking at charting new territory and already evolving your business. Tell us more…

Nicki Bowers: We started off our business really focusing on BPOS – what Office 365 was at the time. We didn’t have a managed services business 18 months ago, and now we’re onboarding at least one customer a week into our managed services business. We’re having to look forward not 12 months, not two years down the track around what our business needs to look like, but what does it need to look like over the next six months?

Steven: How far forward are you able to plan considering how fast technology and the market is changing?

Nicki: We have a longer medium-term plan at all times, but in terms of our execution plan we have an immediate plan that really strives over 12 months.

Steven: Graeme, I've got a question for you about the tools to make a change to your business. You may need finance to make a dramatic shift. Readify was recently fortunate enough to get a large private equity investment to look to help grow the business. Could you talk a little bit about what financial tools are available for companies to make a transition?

A private equity or venture capital company is looking at individuals and they’re looking at the space that you’re in. We were fortunate enough, either by design or by accident, to be in a really great space and one that they saw a real big future in. So there’s that.

If you’re fortunate enough to be a listed organisation already there’s the ultimate in crowd sourcing. By convincing the market that you’re a great bet, you’ll increase your share price and raise money that way. I call that the ultimate crowd sourcing event.

But of course the best [way to raise money], if you can, is to do it through revenues or profits. If you can start to change your business and do it early enough, before some of those old revenues start to disappear, then that’s obviously a good way to get started.

Steven: Dave, Brennan has been vocal about being on the hunt for acquisitions. When you look at potential targets what things are they lacking?

Dave: There are only a few reasons why we’d want to make an acquisition; to get into new areas of technology; to get some intellectual property; or it’s about acquiring a profit. Most of the businesses in Australia are not going to have intellectual property, unless you’re in Nintex or someone like that.

For most people in the channel, it’s really about a revenue stream and about a profit stream as well. The most important element of that is profit. Winning deals at zero margin is not going to help when an acquirer comes along.

Steven: The last time we talked, you mentioned about having something scalable – how scalable are managed services?

Dave: Professional services, managed services or anything that involves human beings are ultimately not scalable. If you win a new managed services contract, you’ve got to employ a new person or 10 people or whatever the case may be.

Often, the reason you’re winning that managed services contract is that the client doesn’t want to scale up their IT department to be able to handle that workload. If you’re making X percentage profit when you’re this size as a managed service provider, you’ll still be making the same amount of profit as a percentage when you’re larger, with the exception of automation and some smart things you can do at the back end to automate those processes. It just doesn’t have economies of scale attached.

Steven: What does have economies of scale?

Dave: Cloud revenues do, absolutely. Telco revenues. Things like that where you can build out a backbone in the infrastructure and then resell it time and time again, and employ significantly fewer people at scale to run a big rig. You almost need the same number of people to run a small rig.

Steven: Nicki, as a rapidly growing company that’s had a lot of success in a short space of time, where does your financing come from and how are the finance markets?

Nicki: We’re in a fortunate position where we’re fully self-funded. There is a lot of money out there at the moment. In the last six to 12 months, we’re seeing more and more – whether it’s private equity or capital – being raised in tech and we’ve seen a lot more people looking at listing. The money’s out there.

Steven: Scott, as the only ASX-listed company on the panel, tell me a little bit about the pros and cons of being a public company.

Scott: One is due diligence with investment within the business, because ultimately you’ve got to report that to shareholders who are the owners of the business. Your stakeholders are very different: they’re interested in the dividend or they’re investing in it for growth, they have different views of the company.

It is the ultimate test every half year when you’ve got to go back and confront your shareholders and explain your position. It makes you very considered in investment, because you can’t just throw stuff against the wall and hope it’s going to stick.

Steven: Graeme, when you were a small company you put in some corporate structures that other small companies wouldn’t necessarily do – why?

Graeme: A board can constantly check in terms of governance and strategy and go through the normal rigours. We’re all accountable to someone, whether you’re ASX listed or LSX listed or a private company, we’re all accountable. Putting those rigours in place is really important. We always said, "Act like a small company, be agile like a small company, but tick a lot of the boxes that a big organisation would need to tick.'

Steven: When you put in this board, how big was Readify?

Graeme: Tiny. From 15 people, we had a board of directors, and we were going through monthly board meetings.

Graeme: No matter what size organisation, it’s actually really important that you have a decent vision that your staff can get behind. If you don’t have a vision, then the de facto is, 'Get behind my company so that it can make lots of money for me to go and buy a yacht.' I'm not sure that’s a vision that people really want to get behind.

Next: The migration opportunity