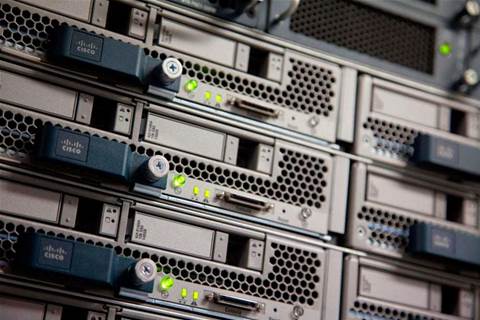 Some may tell you that Cisco's Unified Computing System is fine as a rack of blades but you would be wasting your customer's budget if this was your recommendation. Cisco's UCS works best where the customer must virtualise their infrastructure and availability is critical.

Think of it as pools of resources for customers, virtual machines or workloads, especially if your customer is a hosting provider (or if you want to provide such services to your customers).

Cisco engineers showed CRN that it's a painless, point-and-shoot process to allocate or migrate resources in moments instead of hours or days with little to no downtime.

Each UCS chassis is little more than bare metal with no network cards and even the Intel Nehalem blades are abstracted - their universally identifying MAC addresses applied in software with the UCS manager. So there are few cables to worry about and the backplane is neat.

And everything internally is Ethernet: clean and simple.

CRN was told the return on investment doesn't kick in until a few UCS chassis were installed and there needed to be about 50 servers for this to make sense. Proprietary improvements mean you eke four times as much memory or up to 384GB out of each chassis for the same number of processors - a software-licence saving in a heavily virtualised environment.

Now the landscape opens to include disaster recovery, lower energy use, cheaper DRAM, smaller datacentre footprint, less cables and a unified way to manage the stack. A SSH command line interface to the kit and XML uplinks to management software - so your customer doesn't have to ditch their cherished tools - wins over sysadmins.

Resellers must understand what motivates their customers and should discuss how collapsing the disparate areas of storage and networks, for instance, impacts skills needed in the organisation.

Policies are rigorously enforced especially when moving virtual machines through and out of the data centre and even into the public cloud using Cisco's overlay transport virtualisation and tools from the likes of VMware. This could be of great value if your customer has periods where they experience surges in demand, such as a retailer on Christmas Eve or an accountant just before June 30.

Although UCS should play well with infrastructure in place, the presence of its Trojan horse will tend to see customers inexorably drawn into its orbit.

And seeming to anticipate this blowback from too tight an alliance with VMware and EMC, Cisco has allowed NetApp into the tent, recommending it alongside its storage partner's products.

Unified or fabric computing is more than a fad or phase. It's a logical, evolutionary step to trim the paunch from the data centre that should deliver measurable benefits in short order if done right.

We collected four views of the technology; from the vendor, resellers Efficient Data Communications
and Dimension Data and IBRS analyst Kevin McIsaac.

A virtual machine is a way to encapsulate an application such that it can be moved from one CPU to another but it is de-coupled from the network - that causes security, policy, quality of service and configuration issues. As you move a virtual machine between clusters it loses all those attributes.

So Cisco's VMLink is a service profile to take a virtual machine from one processor to another but all the attributes including port MAC address, configuration, policy, security and everything else it just moves in an XML file. So now we can move virtual machines between the fabric and move them out of data centres.

You could want to move into a public data centre to access the elastic cloud; you could reserve capacity in Telstra's cloud or Optus' and, when you need it, it bursts into their cloud and, when you don't need it, it comes back again.

The trigger points to buy are where a customer is either going to invest in a new application and needs a new server farm or where they're looking at VDI (desktop virtualisation) or where they're starting to look at building a new datacentre or for test and development.

If I want that cloud capacity I need to virtualise and it's not just server virtualisation, it's the firewall, network and server complex. Services move from data centre to data centre and as a result they lose control and it becomes difficult to manage service levels.

We tend to lead with UCS where the customer needs high availability, disaster recovery and they're looking at significant investment in a piece of infrastructure. UCS gets cheaper after the premium of your first
two chassis.

We're seeing a lot of interest in voice over UCS, virtualising for flexibility. In other cases it tends to be more top down; we see a lot of clients with 30 percent to 40 percent of their servers virtualised who can't go any further.

It could be used as a normal blade but that would to be leave the value on the side. Most importantly, if I virtualise everything I can move the server around, so I can do that to a whole service. For things like backup and disaster recovery it picks up the server and security context and that's where mobility becomes cloud-like.

We're not expecting to see wholesale replacement of blades. UCS is popular with those who have a very big demand for compute capacity for a particular application or large numbers of users such as financial services or education and we're seeing a lot of interest around virtualising the desktop because traditional blades are still memory-constrained.

Mid-market reseller: EDC, Andrew Lowy
I see UCS going into private networks; I believe businesses are really going to want to own their platform and won't be confident sharing. I don't see a public cloud happening for a while.

It's like a network component with the server built-in that provides a lot higher performance.
We've had to acquire certification and engineers who have expertise in the virtual and storage environments because we've been focused on infrastructure.

You need a sales field engineer and pre-sales engineer so we're talking about 14 exams. And then we need to sit three training sessions. You need to buy the UCS equipment (Cisco has a not-for-resale program) and build a lab and you need to align with VMware. We've aligned with NetApp for storage.

Over the next five years people will want single-vendor solutions because it's getting more complex and you need an intelligent network that interoperates with the pieces in the puzzle - so we're providing solutions the marketdemands.

And we focus only on Cisco.

We work with Cisco and come up with a bundled go-to-market solution. Based on us putting in all the hard work in a particular market we get an exclusive buy price on products that make up that solution.

UCS is just an evolution but what's a revolution is that it was Cisco.

VMware is key to what's happening in the data centre and consolidation is how you pay to get UCS in - if you get nine to 18 months return on investment you get a thumbs up from the CEO.

The idea that I'll have a data centre with 100 boxes will go away. Wide area networking will become more important because increasingly we'll run everything from one data centre.

If I was a reseller I would divide customers into two categories and ask them: "Do you have existing, large-scale blade infrastructure?" and unless they are completely dissatisfied I would say there's little chance of replacing it with UCS.

But if they say they have a bit of this and that then you have a chance.

As a reseller, I'd look for people who have not yet virtualised - look for shops that have a couple hundred workloads already, those that aren't virtualised and then position UCS as a great virtualisation platform and talk about the virtues over someone else's blades or infrastructure.

If all you do is sell boxes then you're dead; you have to be adding value and that's not saying I have a cheaper box. It's showing how by virtualising you'll get your money back in 18 months and have platforms with capabilities you can't dream of today - high availability, disaster recovery, continuous operations.

Who cares about the magic pixie dust that Cisco has rubbed over the blades? Sell the benefits.

Either the IT shop is going to say they are pressed for capacity and needs to be more scalable or you can say that by moving to this UCS and virtualised infrastructure you can move to high availability and disaster recovery cheaper than you could do otherwise.