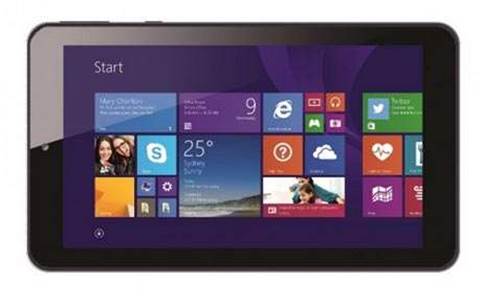 When it was advertised by Coles last year, the Pendo Pad 7 set a new low for the price of Windows 8.1 tablets in Australia, though as far as we can see Coles no longer advertises the tablet. Craig Cooper bought one and shares his impressions below.

This tablet packs a lot of hardware and software for the price, but in our experience you will need to be lucky to find one for sale. We found one at a store in Launceston, Tasmania.

The switch to Intel’s Bay Trail processors has brought gains in processing speed and graphics performance. The tablet performed admirably, managing a brisk startup and shutdown.

The 1.3GHz quad-core CPU is 64 bit, but due to issues with Instant-On technology the Pendo instead comes with 32 bit Windows. It appears that other manufacturers have solved this issue, so hopefully a 64 bit Windows tablet from Pendo is on the way. Open source enthusiasts take note that some users have already got Linux and Android installed on Bay Trail devices.

Storage was not up to the task, with approximately 11GB taken up by Windows and its recovery partition. After Windows Update you could be left with as little as 2.5GB internal storage. I suggest you try the MicroSD slot to gain much needed space. Switching your personal folders is a cinch.

Physically, the tablet was what we expected for this price. A rubberised back cover made it easier to grip the tablet, but was also highly absorbent, so expect it to get covered with fingerprints. The tablet edges were a bit sharp, which may irritate hands during long sessions.

Wi-fi appeared to top out at 8Mb/s, which is plenty for a device like this. Bluetooth functioned as expected and paired with all devices.

The screen resolution was 1280 by 800 pixels. We found that outdoor use in daylight was next to impossible and viewing angles for the screen were pitiful. We also found we needed a steady hand while viewing video as even the slightest movement rendered it unwatchable. VLC managed smooth playback from USB of a 1080p H.264 movie with subtitles. Some older full screen games did not scale correctly to the (only available) display resolution.

Touch and multi-touch response was fast and accurate and the on-screen keyboard was superb. Thanks to the integrated Intel HD Graphics processor, 2D and 3D graphics performance was very pleasing. There is a 0.3 megapixel front-facing camera which was very slow to activate and produced images of poor quality. There is no rear camera.

We tested the USB On-The-Go port and found that all the devices we connected worked flawlessly. However you must remove your tablet from power to use the USB adaptor, which is a terrible design flaw. There are adaptors available for charging whilst using USB OTG but they are all made for Samsung devices. We did not have the opportunity to test whether they work with this device.

We found wildly varying battery results using the tablet for different tasks. For example, when running a game or application that kept the CPU throttled up to maximum the battery was dead within an hour.

Battery life dwindled rapidly when we used many USB devices and worked in desktop mode with both wi-fi and Bluetooth active, though both can be disabled. Overuse of the USB port will drain your battery rapidly, so we suggest using Bluetooth whenever possible. The system used virtually no battery when we left it mostly idle.

We also found that the tablet often did not appear to recharge while turned on. We were also unsuccessful in activating Office 2013.

Overall, the screen could do with an overhaul and the battery life and build quality leave room for improvement, but those are small gripes for such a cheap device.

I can highly recommend this tablet to those on a budget, or anyone interested in this new Intel platform.

Have you bought the Pendo Pad 7 with Windows 8.1? Tell us what you think below.