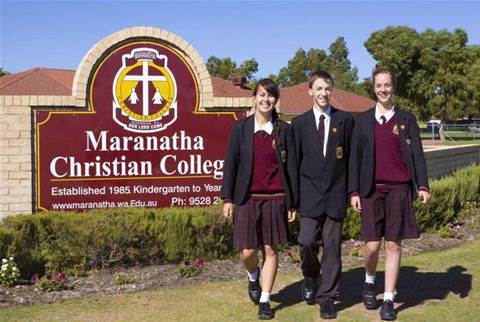 Maranatha Christian College is about 50 kilometres south of Perth in the exotically named suburb of Waikiki.

With about 1000 pupils from pre-school to senior secondary, it serves a continuum of educational needs. Pupils use a fleet of about 400 Windows PCs and notebooks.

Maranatha's IT manager Blake Phillips explains that the school's strategic plan "says we want to become a leading school in IT. What we're trying to achieve is a reliable and faultless system that can be used as a tool and not be a frustration".

However, the network equipment that they had in place simply wasn't up to the task.

While most of the buildings had access to an Ethernet connection, there was typically only one in each classroom. In order to manage costs, the school had three trolleys that were wheeled from room to room as needed.

Each trolley had about 30 laptops and a wireless access point secured to it. When the trolley arrived, it was plugged into the ethernet connector on the classroom wall and the students, in theory, had access to the school's networked resources and the internet.

However, theory and reality were poles apart. There weren't enough access points to go around and the equipment was notoriously unreliable. Blake says it only worked about a third of the time.

The system also meant network access was limited to where there was a connected trolley. That meant most of the school was left disconnected for much of the time.

When the gear didn't work it meant havoc for teachers' plans.

Even when only a small number of systems failed, whole class activities were either disrupted or had to be abandoned altogether. With such poor reliability students and staff suffered significant interruptions to the educational program.

The school needed to find a solution that could cater to several specific needs. Any replacement system needed to cover the entire school area, be easy to manage and be capable of handling connections for the whole school population - students and staff. Given that staff and students move about the campus, the chosen solution needed to deal with computers connecting and then reconnecting on different parts of the school grounds.

Finding the solution
Phillips and the school's business manager, Mark Bateman, approached reseller Datamerge to help solve their problems. While it might have been possible for the school to simply purchase off-the-shelf wireless access points and connect them to existing network ports, they wanted a more comprehensive and considered solution.

"We looked at a few different options and found the flexibility of placement and not having to worry about channels made it far easier to install and manage," says Phillips.

Maranatha already had a relationship with Datamerge.

The reseller had been with the school for nearly two years looking after the phone system and "they'd been very good", says Phillips. "When this came up we asked them to come in. They've been a very good partner."

Datamerge's general manager Gary Botley explained they "could do the whole thing and not just dump a bunch of gear in their laps".

The solution was designed around access points made by Meru Networks.

While the unit cost of Meru's access points is higher than typical consumer units, they have a far greater range. As a result, the entire school campus could be covered with a third fewer access points than most other off-the-shelf solutions.

"We really showed how it would work on site rather than just talk about the hardware," says account manager Peter Ibbotsen.

Most consumer grade wireless access points are designed to work on their own. Where there are multiple access points, each has to be managed independently of the others and they need to operate on different wireless frequencies. When many access points are near each other they can interfere with each other causing signal degradation and other conflicts.

"The Meru wireless solution is totally different in the way it handles multiple access points to cover a large area," says Botley. The access points run on a single channel to avoid interference.

Another benefit is that Meru access points can be individually managed from a single control interface. As they all operate on the same frequency they appear as a single access point, making movement across the three-hectare campus seamless.

With the staff and student populations roaming across the campus, it's possible that specific access points may be more heavily loaded than others.

For example, if the library area was particularly busy, the access points covering that region of the school might be overloaded.

This isn't as significant an issue with the Meru hardware as with cheaper equipment. The Meru access points can handle more concurrent connections than less robust systems. It's the "whole of life" view that makes this project successful. The system put together by Datamerge for the school will likely have a lower cost of ownership than equivalent systems using cheaper access points.
Datamerge was keen to establish a long-term relationship. Botley explains.

For example, security and internet content management remains the school's responsibility.
The relationship between Maranatha Christian College and Datamerge has continued to grow. With government programs dictating that every pupil is to have access to a computer, the school is bringing the student/computer ratio up to one-to-one and purchasing those systems through Datamerge.