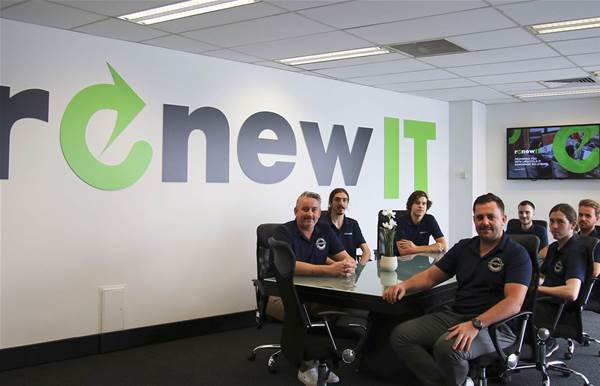 Technology has to come from somewhere, and rollouts of new ICT hardware and software by Australian channel partners are often the subject of case studies gracing the pages of CRN. Less often discussed, however, is the deinstallation of end-of-life hardware and the value of recycled ICT hardware.

Renew IT performs deinstallation, recycling, government-approved data destruction and hardware refurbishing for organisations across Australia, and has proven that reselling recycled goods back into the market can yield strong growth.

The company grew 101 percent to reach $6.43 million for the 2018 financial year – a cracker result for the company and a fantastic gift in its 10th year in business.

“We’re starting to get some good traction with channel distribution and resellers. We’re in partnership with Synnex and now are offering our buyback services as part of their technology-as-a-service program,” Lancaster said.

Having worked with leasing financier Equigroup in one manner or another over the past eight years, Renew IT has steadily won more and more jobs through the growing relationship. Lancaster said that Renew IT is now remarketing returned assets in Queensland and Western Australia.

“And they have a decent-sized deal out in WA with the Department of Education, so we deal with and handle all of their returned assets for hundreds of government schools in WA. That’s what’s really kickstarted our growth,” he said.

“It’s also come down to forging partnerships with other finance companies. Synnex has been part of why we’ve had this surge in growth. We’ve also opened up an office in Boston.

“A lot of people are starting to see the value in what we’re doing. We’re not the only ones out there doing it, but we like to think we do it well.”

When undergoing a deinstallation, Renew IT will be provided a list of equipment a customer wants disposed of, before making an offer for that gear. Once the price is agreed on, Renew staff pack up the kit on-site and take it back to the lab for processing.

“We’ve got a lab here that can process 500 laptops in about an hour and half,” Lancaster said.

The company performs Department of Defence-standard three-pass data wipes on hard drives and provides customers with a destruction certificate.

“That’s the key to it a lot of the time for customers: making sure that the data is destroyed. It’s a big thing for a lot of people, the monetary value to a lot of customers is secondary to that concern,” Lancaster said.

Once processed, Renew IT’s hardware is packed up, often by the pallet load, and sold wholesale overseas. While some assets are sold locally, Lancaster said 90 percent of its revenue comes from exports.

“We’ve got in the region of 6000 assets passing through the warehouse a month, so we’ve got to keep moving it, and the best way to do that is wholesale,” he said.