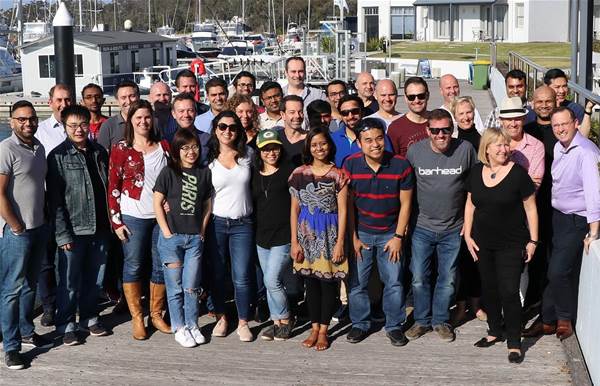 The pair ran that company from 2012 in Australia, until it was acquired by Accenture in 2015.
Their sophomore venture is built on Microsoft Dynamics 365, and to say that decision has paid off would be an understatement.

The team have had a massive year, growing revenue by an astonishing 452.3 percent to $11.1 million, picking up key wins and enjoying global recognition along the way.

Explaining the company’s success to CRN, Struthers said “hard work and heavy lifting” were critical, but two other high-level factors contributed to the business’ 2018 surge.

One was Microsoft itself.

“Microsoft has significantly changed their platform, to the point where enterprises are now taking it seriously as a competitor to Salesforce,” he said.

“Then it’s the team that have decided to join us at Barhead. Whether it’s in sales, support, delivery, it’s a fantastic team – very passionate about what they do and through that passion, they have been able to educate and delight our customers, to the point where they want to do more work with us.

Speaking to the changes Microsoft had made that complemented Barhead’s journey, Struthers said key leadership changes at the vendor’s corporate level across sales, marketing, engineering and finance had elevated partnering as well as product.

“They’ve had a different strategy in terms of what the product needed to be able to do and how they got it to market,” he said.

“And then on the ground in Australia, there’s also leadership changes, [national sales manager for business applications] Craig Bates came on, with a different focus and energy level to drive the education of the market of what Dynamics 365 does.

“On the product side, Microsoft consolidated the Dynamics CRM and the ERP platforms under the one banner of Dynamics 365, and infused that with AI, analytics reporting and data visualisation with Power BI. They are really starting to tell one Microsoft story. Which means if you’ve got Office 365, and you’ve started to use Azure, you might be playing with Power BI, you’d be crazy to not look at Dynamics if you needed a CRM.”

Challenging the Salesforce market is not a trivial undertaking, given the SaaS pioneer’s size and reptuation.

As a former Salesforce specialist in his previous business, Struthers knew all too well the power and prevalence of the Salesforce product and brand.

But Barhead has been able to demonstrate that Salesforce is not unconquerable, by delivering Dynamics-powered solutions not just to customers already working on the Microsoft stack, but also delivering succesful migrations away from Salesforce.

In April this year, distributor Hills Limited migrated its CRM to Dynamics, away from Salesforce with the help of Barhead.

“It was very important to be able to show that moving off Salesforce to Microsoft is doable in a relatively short time frame,” Struthers said.

Barhead also secured another win in the not-for-profit space with Mission Australia.

“They had multiple systems including a Salesforce deployment, which they used for fundraising, and we consolidated that onto Dynamics 365.”

It isn’t just a growing team and revenue that Barhead has to show for its hard work.

In August, Microsoft inducted the company into its Business Applications inner circle, where they stand among the top one percent of business apps partners in the world.

Looking ahead, Barhead is building out its services offerings, with plans to add new practices and talented leads to helm them.

“In many ways the proof of concept is done. And now we’re going to accelerate Barhead. We’ve got new offerings, we’re investing in people to run our [Microsoft Dynamics for] Talent practice, we’ve got somebody for Dynamics for Marketing, we’ll branch into finance and operations and we’re very much focused on Microsoft’s Power BI platform,” Struthers said.