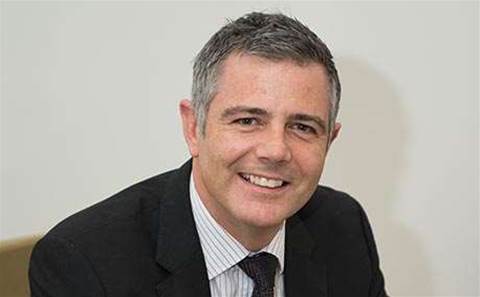 Chris Trevitt became EMC’s ANZ general manager of business partner sales at the start of the year. He’s an EMC veteran with his 10-year anniversary looming this January. For the current role, he moved to the east coast after a stint heading up the vendor’s Western Australia and South Australia operations for almost four years. Trevitt has also served as EMC’s account director for National Australia Bank out of Melbourne, after getting his start in the technology industry at IBM.

“We have something like 700 registered partners within our ecosystem. They’re a mixture of all sorts – larger and smaller companies. EMC’s growth has been well reported, with our channel revenue growing in double-digit percentages last year.”

“The program we announced in May at EMC Forum was a complete redesign from the ground up, with the aim of simplicity, flexibility and profitability. We previously had disparate programs and it’s now one umbrella program to cover the different areas.

“We handed out partner awards earlier this year: in Q1 for ANZ partners and globally at EMC World in May.”

“During my experience running EMC’s Western Australia and South Australia, I learnt [that business unit] is 100 percent channel. Channel was the only policy in WA and SA, and that drove a huge amount of success and growth. I now have a corporate edict to grow the channel nationally, as a direct consequence of that experience.

“The other thing is we don’t want to paint a picture of perfection. The rules for a successful partner ecosystem are showing predictability and consistency of behaviour. That drives trust – and partnerships are about trust, a desire to achieve shared goals.”

“We have a new program coming in January 2015. We want to help and enable partners transform with all the dramatic changes in our industry – going from server to service platform. There’s a real shift from reselling to a focus on solutions enablement.

“Our partners should really leverage the EMC Federation. We have a unique corporate strategy: EMC for storage; VMware for enterprise software-defined data centre; Pivotal, launched a year ago in partnership with players like GE and Intel, for big data and app development – and we wrap all of them around with RSA, as security is paramount. We are currently training partners to deliver this federation.

“We’ve also launched a “marketing academy” and marketing accreditation for easier partner access to resources. And of course, we have our new partner portal – it brings together all the different touch points in one place.”