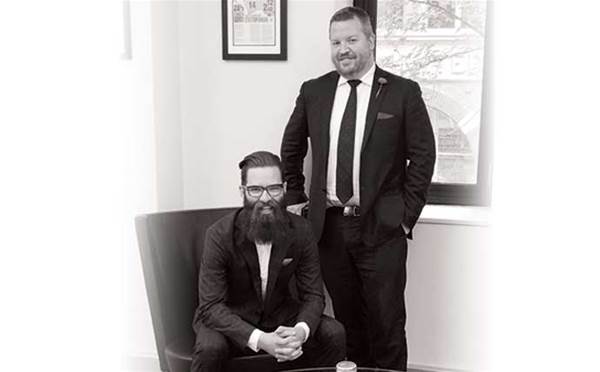 Making its second appearance in the CRN Fast50 since Katana1’s 2011 inception, the system integrator’s co-founders, Nick Russell and Ross Ogilvie, have seen their fortunes nearly treble. And while growth plateaued from 2013 to 2015, it roared back by 135 percent in the past financial year to land at $21.9 million. By comparison, its first full-year revenue was about $2.6 million.

While margins are still constrained, Russell says he and Ogilvie are creating a prized asset that will appreciate over time. Katana1’s secret, which Russell hit on while a NetApp sales manager, was to narrow in on a few well-heeled customers with a “high-touch model”, he says.

“A lot of integrators managed a huge number of customers. [Account managers] at what we call the ‘D-hash SIs’ – Datacom, Data#3, DiData – would look after 300-500 customers,” says Russell. “So the logic of Katana1 was to focus on 10 customers per rep… where we can get in and provide multiple lines of business and add value. That’s key to our success.”

Suppliers don’t always like the approach, which more akin to personal banking than vendor-religious reselling.

“Where you look at our big deals last year, we sat on the customer side and evaluated multiple technologies. The customer will say, ‘We have this project; what’s the best technology?’ and in some cases we’ll evaluate four or five platforms. The vendors get nervous, but then we help the customer do the deployment,” says Russell. “We don’t want to be an extension of any one vendor and it works well for the customer. I’ve had good feedback from CIOs [because] we understand the customer’s environment and we’re not just running around saying, ‘Do you want one? Do you want one?’.”

And while Russell positions Katana1 as an agnostic, trusted adviser, it’s gone deep with growth vendors such as analytics provider Splunk: “We have more Splunk resources than Splunk do,” he says, including employing former lead Splunkers at Telstra, Optus and NBN.

“They’re the cream of the crop in Australia; one was Splunk’s first customer in Australia.” This plays into what Russell calls Katana1’s “rock star policy”.

“We don’t make a product; we’re building our own monitoring capability that’s a mix of products and our own IP, but for the moment we represent technologies so our offering to market is our people, so we try to get the absolute best of the best.

“Over six years we’ve only lost two technical resources and both were poached by AWS and Splunk, so they’re still people we work with.”

For future growth, Katana1 is building an internal monitoring solution based on Splunk and Puppet automation called Skynet, which intelligently captures patterns in network activity for follow-up and action. It follows a DevOps model by bringing together development and operations personnel.

This necessitated a change in culture and adoption of tools from the likes of Atlassian to speed development, Russell adds.