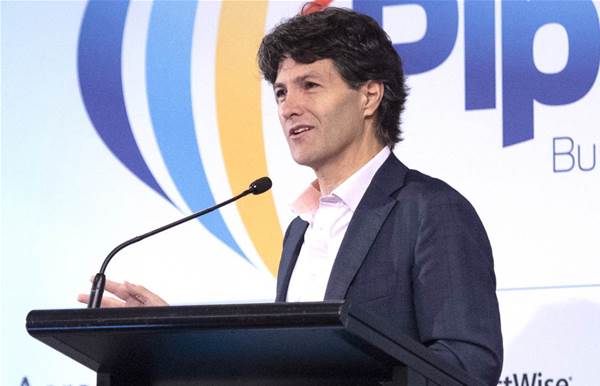 CRN was delighted to welcome Victor Dominello, NSW minister for Finance, Services and Property, to speak at CRN Pipeline on how the state is leading from the front in digital transformation. From digital drivers’ licences to open data to helping commuters get the best deal at the fuel pump, the state government is delivering an array of advances.

Dominello was responsible for implementing the NSW government’s ICT Strategy and innovation agenda, which included the establishment of a whole-of-government data analytics centre and response to the collaborative economy. Equipped simply with an iPhone plugged into the display, the minister was a highlight of the conference as he showed how the state government is putting essential services into the hands – and pockets – of every citizen.

The NSW government has an ambitious agenda to embrace technological change, which is raising the state’s profile at the federal and international level. Initiatives have included a digital transformation bill, which was passed in parliament last year, that amended existing legislation preventing the government from implementing some digital services. The bill allows the government to serve certain documents electronically, such as via email.

At CRN Pipeline, Dominello revealed that Michael Keenan, the federal minister assisting the Prime Minister for digital transformation, was looking to set up a meeting, similar to the Council of Australian Governments (COAG), focused on digital disruption.

“Yesterday I spoke to Michael Keenan, who’s basically the federal minister in my space. He wants to have a COAG-style meeting in about August or September with all the digital ministers or ministers responsible for digital transformation, so we could showcase what every state and territory is doing,” Dominello said.

“Michael is from Western Australia and he conceded, ‘Look, Victor, I’m coming to you because New South Wales is unquestionably leading the way when it comes to digital transformation.’”

It’s not only federal ministers who are paying attention, Dominello added. He was recently approached by the Australian ambassador to Argentina, which is hosting the G20 later this year – “the people in Buenos Aires have singled out New South Wales”, Dominello said.

“We are getting that reputation around the world of really pushing the envelope. I even had people out from the UK who said the same thing: ‘What we’re seeing in New South Wales is pretty exciting, and we want to see what you’re doing’.”

The move to a digital drivers’ licence has been a flagship project for the state’s digital credentials. The state government introduced legislation in May 2017 to make digital driver’s licences and digital photo cards available to citizens by the end of 2019. The regional city of Dubbo was announced in August 2017 as the site of a 12-month trial of Australia’s first fully electronic vehicle licence, ahead of a wider rollout across the state.

Dominello demonstrated his own digital drivers licence at CRN Pipeline. “This is real and we’re trialling it right now in Dubbo. The measurements around the trial have been really well received.

"This is a classic example of how we’re really moving fast in these platforms. But it’s not just digital driver’s licences – and hopefully I’ll pass legislation very soon that will enable everybody else to opt in. Forget the plastic driver’s licence, because everyone in this room knows that plastic is inferior when it comes to security compared to digital.

“So, there’s so much more protection around use and/or abuse of a licence, particularly if it’s digital.”

The NSW government was the first jurisdiction to introduce a real-time fuel price comparison service when FuelCheck went live in October 2016, first as a website and then as a fully fledged app.

The app offers a range of features including a function that gives users the option to save their favourite petrol stations and receive push notification when petrol reaches their chosen price. It also integrates with Google Maps to direct users to a preferred service station.

Dominello demoed the tool at CRN Pipeline. “Who loves paying high prices for petrol? No one. If I go right across Sydney, the differential in petrol pricing is a bugbear of mine.”

Running the app live on his smartphone, Dominello showed how petrol prices varied from $1.42 to $1.52 at different service stations.

“Why on earth would you go and pay $1.52 when you can pay $1.42? The best thing about this is it’s all in real-time. I passed a law in parliament about a year and a half ago saying [to fuel stations], ‘You’re already required to tell us, the consumer, by putting a big, ugly sign on the street, what your petrol price is. All I’m doing is saying is please come into the 21st century and tell me in real time through a portal I’ve designed for you.’”

“We can do all these amazing things. We can start seeing charts in relation to trends. This is all open source data, mind you. We get all the information now from petrol stations, we publish it as an API, the NRMA then puts their little device on top of it and petrol suppliers and a whole lot of other people are using it.

“Then we can open up all this data to the consumer. We can start looking at petrol prices in terms of month and year averages and you can set alerts to when your favourite petrol station is doing a discount deal.

"Think about what we’ve done here with petrol prices. Information is power and we’re giving power back to the consumer, to the citizen, so that they can then decide if they want to pay $1.42 or $1.52, and how much they’re prepared to drive down the road to get that discount,” Dominello said.

The state government in March reformed the compulsory third party insurance scheme, reducing the costs of CTP Green Slips for vehicle owners. The cost reduction meant more than four million NSW vehicle owners were responsible for a refund on insurance bought before the refund was introduced.

Dominello showed how he was able to track the status of Green Slip refunds directly from his phone using analytics built on the Domo platform. He said the real-time data exemplified one fundamental requirement of his digital philosophy – immediacy. “I said to the agencies, ‘Do not give me anything, quite frankly, unless I’m seeing it in real time,’ because I’m not interested anymore. I’m just sick of it.

“When I was as in Aboriginal affairs for four years, I saw what a struggle it was to get good policy on the ground because we weren’t measuring it, and when we did measure it, it wasn’t in real time, so by the time I got a report, all these lives were challenged, for want of a better word, because we didn’t have that laser-like precision. So give it to me in real time.”

On screen at CRN Pipeline, Dominello showed that exactly 1,151,926 people had received their individual Green Slip refunds at the time of his presentation, thanks to data that was synced just 10 minutes before.

The government also integrated quick-fire citizen feedback into the tool. “At the end of the [refund] process I want to know, did you have a good experience? I don’t want you to fill out a 20-page survey because that will drive you spare. If I’m asking you to fill out something that’s going to take you more than 10 seconds, you’re not going to fill it out – just give me a thumbs up, thumbs down and a comment box if you want.

“Roughly a million people have got their refunds, and unbelievably we have had 136,000 people decide to give us their feedback, which is just unheard of in terms of feedback, and better still, they are just ridiculous numbers [in terms of positive responses].”

Dominello showed that feedback so far had been just under 99 percent positive.

Mitigate tech risk in your business
By Steven Kiernan