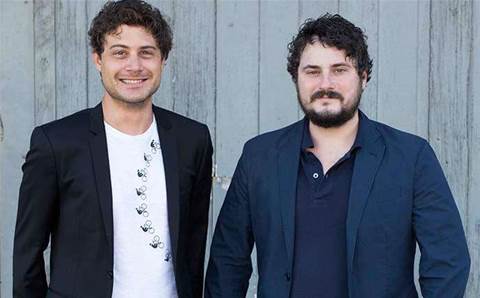 Is there any application that receives less love than the vendor’s own messaging app at a conference? Notoriously crappy event apps come dead last when you can use SMS, iMessage, Facebook Messenger or even LinkedIn Messaging.

However, one Sydney company is confident they have not only cracked in-app event messaging, but that their platform could  one day rival B2B behemoth LinkedIn.

So what is it? At first, the founders of Proxima reach for analogies that sound dangerously clichéd. “It’s almost like we’re building the digital version of swapping business cards,” says Sebastian Pedavoli, co-founder and creative director. “It’s almost like Slack for events.”

Yet the concept looks solid. Pedavoli and co-founder Dan Nolan have built an events app that is equal parts journal, broadcast tool, ticketing and payment gateway, schedule planner and check-in notifier. The event organiser displays a list of attendees who can choose to talk to each other by sliding a finger over the screen, something like the infamous Tinder swipe. If one attendee is rejected by the other, they can’t  communicate with them again.

It’s neat but Proxima claims the breakthrough is in three other areas. Event organisers can assign attendees to chat groups based on similar profiles (eg. role) or events attended. Attendees within a seminar can send questions to the presenter or swap experiences, for example. During the event, the organiser can send announcements to all attendees using the platform. This could include photos, videos or text from the event itself or sponsor messaging (an upcoming version will let attendees share information to other attendees. For example, an attendee sharing a speaker’s presentation with employees also at the conference).

When the event finishes, the conversations are retained in the messaging app, which can be used separately as a standalone service. Attendees can share their email address or phone number directly as well. It mimics WhatsApp by cross-referencing the attendee list with mobile phone numbers in the attendee’s contacts. It uses a powerful Twitter login platform called Digits to show which of your contacts have a Proxima Events account. “We want to use an events app to start talking to people in a professional context,” Pedavoli says.

The non-messaging parts of the app are just as impressive.  There’s a content management system that displays schedules, videos and presentations to selected groups of attendees; attendees can pull information from beacons attached to stalls; the note-taking app supports rich text, can snap and store photos, then sends all notes in a zip file to the attendee’s email address along with the speaker’s slides and notes.

“Some attendees create 10 to 15 notes per day, some with thousands of words,” Pedavoli says. A legal conference that supplied everyone with iPads and fitted keyboards saw a 90 percent uptake in note taking. The next step is to sync with Evernote.

The technology is young but it’s been tested – it has been used in events run by Qantas, TAFE, Toyota and IBM attended by more than 500 people at a time. Pedavoli and Nolan run the app as a managed service for enterprise customers. They want constant monitoring of the AWS instance to ensure that the app can handle ticketing and check-in, the two most critical aspects of event management.

Proxima has also released a digital signage app that can send images or videos to a network of screens powered by iPhones. This can tie into the Events app by notifying people when lunch break is finished, for example. Proxima hopes that, if its app catches on with big event companies, it can get thousands of people communicating through the  app in a short time.

It’s an ambitious goal but given the poor state of event apps, it could be the one that defines the market.