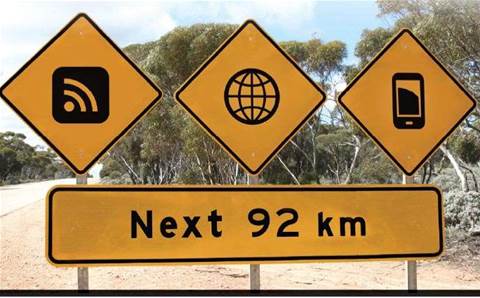 The promise of technology for everyone, everywhere, at any time has never really been a reality for the developing world. Tech just costs too much and, for some weird reason, people would rather eat than catch up with friends on Facebook.

Fixing this inequality was once seen as a hardware problem when we needed to get PCs onto the desks of schools and homes in places you can’t even find on Google Maps. But the arrival of the cloud means you no longer need your own kick-ass server. There’s a mainframe in the sky with plenty of unused capacity. You just need some internet.

In remote parts of the planet, using a smartphone or tablet makes a lot of sense. For starters, you can power these pocket rockets with affordable solar. You don’t need a lot of infrastructure, just a small panel to charge a fat battery during the day so you and your buddies can recharge your tech overnight. There are a lot of charitable types out there making this happen right now. At last there’s an upside to our first-world penchant for annual upgrades to our portable tech.

Once we get these tech toys into the hands of people who can benefit, we then need to get them some internet. Which costs way too much money – just ask the team trying to install the National Broadband Network across this country. Their annual budget approaches the GDP of some nations.

But there is a low-cost way to get a broadband signal to remote places. It’s called TV White Spaces.

In case you haven’t heard of it, it’s basically wi-fi using TV channel frequencies. The advantage of using these frequencies is range, up to 10km, and the ability to ignore trees and hills. Plus, you can get about 16Mbps – which, frankly, is better than Rabid ever gets on ADSL. A bunch of charitable types are out there plugging this stuff together right now.

So now we’ve got tech and internet out in the wild. Those users will also need to access something other than Facebook and Google. They will need access to affordable cloud services. That’s starting to happen too.

Microsoft has announced no-charge access to all their cloud stuff for not-for-profit outfits. The company expects to hand out $1 billion worth of cloud access in the next three years. Yeah, sure, it doesn’t actually cost them $1 billion, and they’re in it for the publicity as well as the philanthropy, but the services are real and also really useful.

You can bet most of the other cloud providers will soon jump on board with similar programs.

Access to information is essential for education and it’s been said many times before that the more education you spread, the fewer bombs and bullets you need to buy.

Gotta go! Planet to save!