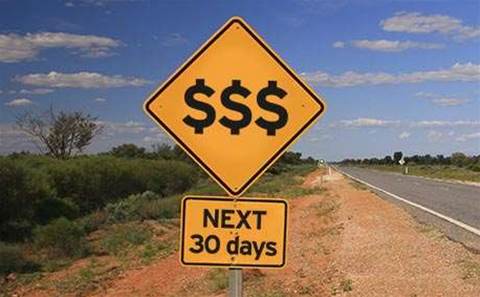 This had always been a cash money business until recently. OK, so we accept credit cards and EFTPOS but that still gets cash into Rabid’s bank account at the end of the day.

What we haven’t done before is offer credit to customers. After giving it a go, we’re pretty clear on why we had that policy. This is what happens when you open a branch in an economically depressed rural region, aka ‘The Bush’.

Yeah, well, they don’t advertise their depression about money until after you sign the lease and open your new shop

Rabid hadn’t previously experienced punters promising to ‘pay you on payday’ before, except for the nephews and nieces, but that’s an in-joke around here because payday is never for them. Anyway, getting the same line from customers made Rabid think the rug rat relatives had put them up to it, until we remembered they were still looking after the city store. Eventually, we couldn’t sell anything to anyone until we agreed to give them ‘payday credit’.

So we watched our tech kit walking out the door until the shelves were empty, and then we sat back and waited for ‘payday’. You’d think that would be Thursday or perhaps Friday, but nobody turned up with any money on either day.

We soon realised that everyone is paid fortnightly these days, so we played solitaire on the last remaining laptop and drank a few more flagons of coffee.

Apparently, a lot of people are paid monthly out here in the rural and regional parts of the country. Or so we concluded when nobody came in with a wheelbarrow full of cash the following Thursday. Or Friday. Or any other day.

At long last some customers walked in the door the other day. The laptop we supplied them on ‘payday credit’ stopped working so they wanted it fixed under warranty. Yeah, OK, we did the repair, and then we hinted that payment was a little overdue.

Won’t be mentioning that again. We were told in no uncertain terms that every shop here offers payday credit and it is downright rude to ask for payment before then. Fine. If that’s bush etiquette, we can learn to play the game.

Sitting in an empty shop gets you down after a few weeks, so Rabid decamped to the pub, with our last laptop, thinking perhaps we could sell it there or at least exchange it for beers. Surprisingly, everyone in the pub already had their own laptop computer, and all were the same brand we sell in the shop. But we didn’t recognise any of them as customers; so of course, we politely asked where they’d bought them. Apparently, they got them right here in the pub for less than half what we were charging, but supplies had run out. Hate missing out on a bargain!

Back in the shop and still no sign of anyone with cash. Maybe they get paid quarterly out here in the bush. Oh well, only another two months to wait now.