Rabid reseller: "I’m not paranoid but..." 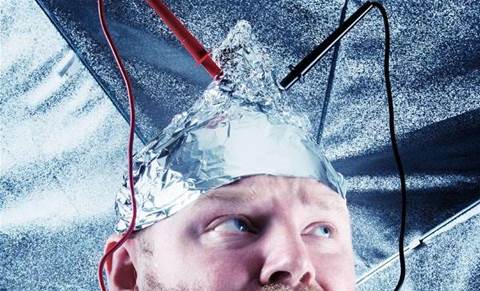 So it turns out the geeks wearing tinfoil hats were right. The governments of the world have been following our tweets and monitoring our Facebook updates. Who would have believed it? What an outrage! How dare they spy on all our public postings!

Rabid was a little suspicious when we got a friend request from “NSA-lover”. Well, you know, we were pretty sure the real NSA spooks wouldn’t use their own acronym for a Facebook ID, so there wasn’t likely to be any real or perceived danger. And she was really good looking and wasn’t too fussed about wearing too many clothes, so you know, what was the harm?

Besides, anyone who follows Rabid’s status updates would know there weren’t any national secrets being broadcast by us. Nobody tells us anything in the first place, so we can hardly give anything away. Heck, we thought the GFC was some new-fangled Internet thing until customers stopped spending money in the shop. We blame the nephew for not telling us there was no such thing as a Global Facebook Cloud.

Anyway, this Snowdon bloke has blown the whistle and now we know those spooky NSA people have also been reading our emails. All we can say is they must be really, really, bored. Who reads email these days anyway? All Rabid ever gets is spam. Maybe those offers to magically lose 15kg in five days are secret codes between evil empires? We can only guess what secrets could be revealed if you knew how to decipher those desperate cries for help from Nigerian billionaires.

Rabid is convinced that the real threat lies in subliminal messages hiding in videos posted on YouTube. There must be some point to all those inane clips, since they’re mostly not very funny and they all seem to be filmed in some dim, dark cave, which we’re reliably informed is the natural habitat of terrorists. That’s where the NSA should be focused. Those evil empires are subverting our youth and stopping them from watching good, wholesome TV sitcoms. Most of the outrage at Snowdon’s revelations is coming from politicians the world over, who are aghast that their allies have been snooping on their emails. Well, Rabid thinks this is all a bit of an over-reaction. Surely the only reason the NSA has been reading their internet exchanges is because they want to know what’s really going on. It’s not like you can tell what politicians are doing by attending their media briefings or listening to their election promises. Just ask the voting public.

But maybe we just don’t follow the right memes. We should take a closer look at what’s trending. We searched for #globalterror, #evilempire and #capitalistsmustdie” and sure enough, up came “gunna bloe up US embissy. lol.” We’re pretty certain that’s a serious terrorist threat right there. It’s certainly a serious threat to global spelling and grammar. Perhaps the NSA are on the money after all with all their monitoring?