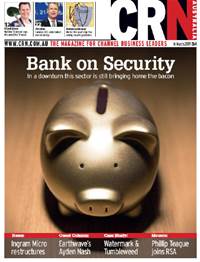 This article appeared in the 16th March, 2009 issue of CRN magazine.

Just as we were getting our "Green IT" campaign off the ground, in storms Uncle Tony demanding we cease and desist. What is his problem? He says climate change is a con and we shouldn't encourage people to believe in it.

We say he's an old stick in the mud, but we don't say it when he's listening, because he carries a rather big stick, and besides we don't care if it's real or make believe. If the punters like the idea and want to buy some Green IT, why should we stop them? Uncle Tony is so old school. He thinks he can just hire a few dudes to go around and thump the worst polluters and that will solve the problem. Come to think of it ...

But the Green IT thing really is working here at Rabid Reseller. We're not sure if it was just that everyone was really bored with beige boxes, or the occasional grey/black box with flashing blue neons, but they sure do love the bright apple-coloured boxes we're offering.

No, that's the colour of the fruit not the colour of those other computers. You know, like a Granny Smith apple. That's a good comparison really - they're green on the outside and leave a bitter taste in the mouth when you discover they're exactly the same old PCs we were selling last week.

But hey, our PCs have always been quite environmentally friendly. We never put in huge wasteful power supplies. Nope. We give you just enough power to run the items that were in the case when you bought it.

And we save the environment with smaller hard drives and just enough RAM, too - we don't increase your carbon footprint with unused multi-terabyte storage.

It's all about restraint - learn to throw away those out-of-focus pictures of your cat. And ditch those fuzzy movies you made with your mobile phone, too - you're only fooling yourself if you think anyone except you can actually watch them.

And pay attention to those adverts about music and video piracy, too. If you delete your Bit Torrent links you'll have lots more disk space. There's absolutely no chance you could fill up your hard drive with stuff you paid for with your own money.

We're also keeping more trees in the forest with our policy of selling only painfully slow printers, which take about five minutes per page. You've gotta really want to print something to wait that long for a result.

And everything we sell is recyclable. You don't need it any more, bring it back to the store and we'll get it recycled - on eBay. Nothing goes to waste around here.

Now, if we can just convince Uncle Tony that climate change really does exist and that he can't send anyone over to The Lodge to reverse the changes with some gentle persuasion, or a suitcase full of cash, then we can relax, confident that we've done our best to halt the rising tides.

Oh, and of course we do have Global Financial CrisisTM busting specials, too. They're also painted green and by sheer coincidence they cost exactly the same as the government's stimulus handouts. Bring your rebates with you!

Gotta go! Planet to save!

This article appeared in the 16th March, 2009 issue of CRN magazine. Subscribe now