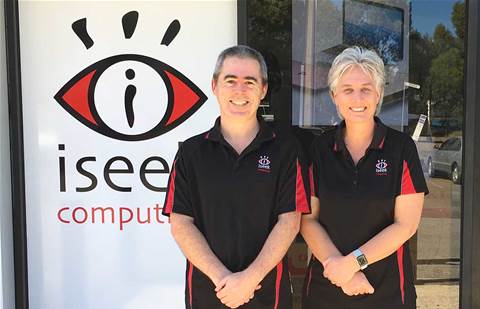 Many computer shops are in the midst of an evolution from traditional break-fix to managed service. It’s a journey that iSeek Computing, in the Adelaide Hills suburb of Littlehampton, commenced several years ago.

Founded by Simon Lindsay in 2002 following the sale of an ISP business he was in partnership with, iSeek Computing started as a home based business in Mt Barker before eventually growing to a team of six nestled in the Adelaide hills suburb of Littlehampton.

Debbie Lindsay, who represents the other half of the business, tells CRN that Simon is the technology guru, while she brings retail, sales and HR management to keep the business humming.

“Managed services was a word that was starting to grow in the industry, and we trying to communicate to our B2B customers that they didn’t need to be responsible for everything, that they could let experts step in to handle IT,” she says.

For some customers, a shift away from buying break-fix style to paying for managed IT on a plan can be a big move, but it’s a change iSeek is seeing more and more readily being taken up.

“I think as technology is developing and people are more reliant on their devices they are starting to realise they need to relinquish the management of their IT so they can focus on the running of their own business,” she says.

“We also have that ability to remote into their system without interrupting them and doing things behind the scenes and helping them without any downtime.”

iSeek opted for a Solarwinds solution to run its managed services after some market research and conversations with multiple vendors. The choice was in part made because at that time iSeek wanted to buy a server and run it on-prem.

“Some of the other vendors wanted us to sign up for interstate connections but we needed a server-based solution because cloud just wasn’t as well connected at the time.

“Back then it was the best way forward – the offerings have improved since then and we have since gone to the cloud with Solarwinds.”

In addition to the two business leaders, iSeek has two front-of-house sales staff, three full-time techies and a school-based trainee.

A member of Leading Edge Computers since 2009, iSeek was proudly named a finalist in the group’s store of the year award. It’s a recognition Lindsay said comes from working hard in a strong collection of companies. “We are fortunate to be able to share our experiences with other like-minded business owners within the group,” says Lindsay.

“Although we all operate independently, we like to share and help each other so we can all succeed. Leading Edge Computers also negotiates with major suppliers to help all stores compete with other retailers on products.”

“Being close to the city means our customers are willing to shop around more easily, however, this means we are also close enough to our on-site techies to offer city customers our services,” she says.

“We are lucky to be amongst the finest wineries in the Adelaide Hills, which comes in handy for work functions too.”

This Regional Reseller profile was written in partnership with Leading Edge Computers.

To find out how the Leading Edge Group can support your business, call 02 8732 9524
or visit www.leadingedgegroup.com.au