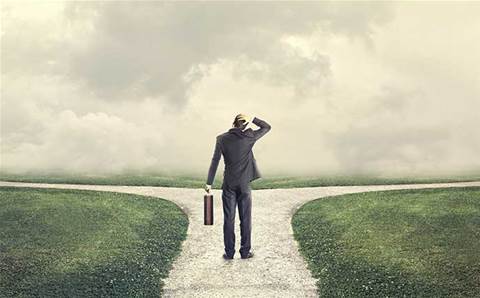 There was once a time when it seemed all but the gnarliest of legacy apps and workloads would find their way into the public cloud. The pay-by-the-month, consumption-based model looked appealing financially, as did the chance to let go of the company data centre and its associated management costs.

But while many traditional hardware suppliers were caught flat-footed by the cloud’s rapid emergence, a combination of engineering talent and venture funding gave rise to a new breed of infrastructure makers sporting a new class of technology.

Hyperconverged infrastructure has proven capable of delivering much of the flexibility and elasticity that made the public cloud so appealing, but without the apparent loss of control. As a result, is has propelled companies such as Nutanix, Simplivity and Tintri into the spotlight and into the data centres of numerous Australian organisations.

And it seems they might even be stealing away some revenue that public cloud providers would have once considered theirs for the taking.

While Gartner predicts worldwide revenue for public cloud infrastructure will grow by 36.8 percent this year to US$34.6 billion, buyers now have a new on-premises option to challenge the benefits of the public cloud.

Perhaps this is part of the reason why Gartner sees growth slowing to 31.7 per cent in 2018 and 27.1 per cent in 2019? Or perhaps it is just because the whole dollar amounts are so large that hyper-growth is impossible to maintain, with Gartner estimating revenue will hit US$57.9 billion in 2019. By comparison, hyperconverged integrated systems will have only reached US$5 billion by then.

Either way, hyperconverged infrastructure represents a legitimate alternative to the public cloud in the eyes of many customers.

The chief information officer of Langs Building Supplies, Matthew Day, says that while many people in the early days saw cloud as a magical bullet to managing complex infrastructure, it came with some nasty side effects, such as latency and cost-creep.

“I think a lot of service providers like Fujitsu, IBM, and Interactive are getting wise to this, as well as Google with their cloud platform. They have to offer services that provide a rich user performance experience. AWS and Azure are sorely lacking in this regard.”

According to the chief technology officer at Thomas Duryea Logicalis, David Gulli, the sweet spot for many customers is a hybrid environment that mixes public cloud with private on-premise cloud services using hyperconverged technology.

“As a result of their experience and use of public cloud services, customers expect their infrastructure to be flexible and elastic in nature” says Gulli. “When they are looking at their next refresh or implementation project, there's an expectation for their next generation of on-premise infrastructure to also have these same attributes.

“With our customers that have implemented a Nutanix-based solution, they are getting this scalable infrastructure on premises in a similar way to public cloud, providing a happy medium between flexibility and the elasticity of public cloud with the control mechanisms of on-premises infrastructure.”

Gulli says the move towards hyperconverged infrastructure is generally based on broader business outcomes than purely economics, such as regulatory compliance or the latency requirements of an application.

“By implementing hyperconverged infrastructure, customers are introducing a platform into an environment that can adapt and change to the requirements of the business, without having to redesign or repurchase entire stacks of infrastructure in the event of growth or change in a business.” Gulli says. “It is a longer-term play that can be repurposed and scaled accordingly, giving customers inventive new ways of problem solving"

While one of the key arguments that originally backed the public cloud model was cost saving, some customers have found they are not always there.

According to Telsyte enterprise IT analyst Rodney Gedda, the true economics of the public cloud have only come to be known with experience.

“The early promise of the cloud was that it would be a lot cheaper,” Gedda says. “The cloud looks good in years one, two and three, but can start to look bad in years four, five and six, because you are paying for a set amount of outcome, but may not be getting as much value to the organisation as you would have.”

According to the sales innovation manager at Trident Computer Services, Matthew Marris, cost still plays a significant role in clients’ decision making around cloud computing, but it is actually leading to some pulling workloads out of the public cloud in favour of hyperconverged infrastructure.

“What we are seeing is that with the cloud, costs usually rise,” Marris says. “When we give an on-premise solution, we can give them predictability over the next three years.

“So when we are talking to businesses about control, predictability of outcomes, and return on investment, we can deliver that. And CFOs quite like that, because they can actually plan for the next three years around their IT structure.”

Marris counts ten instances now where workloads have been pushed back to an on-premise model using technology from SimpliVity.

“Time and time again we have competed against some of the larger cloud providers and been successful on a month-by-month basis, but also given them predictability as well,” Marris says.

Part of the appeal of hyperconverged infrastructure is that it takes away the management burden of a traditional three-tiered architecture. This allows it to be managed much more easily, and hence contributes to both better economics and the more cloud-like experience, as the IT department no longer needs to worry about the underlying infrastructure, in comparison to the old model

“There was a lot of complexity, it was hard to manage, and very costly,” Marris says. “Whereas when you simplify that with hyperconverged, that stack is reduced to next to nothing.

“And as there are upgrades to their platform, whatever the flavour, you get benefit from that. You are taking advantage of improvements in technology, whereas that was never a feature before in the old-style technology.”

Indeed, according to Gedda, if on-premise infrastructure wasn’t as bad as it had been over the past decade or two, then the concept of the cloud would have had a much harder sell.

“When you look at these turn-key boxes and solutions, if they were around 10 or 15 years ago, why would you move to cloud?” Gedda asks. “You might for some reason, but there is less incentive if you have to cobble together network, storage, appliances, computer, software, hypervisors, yada yada ... If there was a turnkey box that was cost competitive to what you pay month to month, then the cloud would have been a much tougher sell.”

Despite the rise of hyperconverged, sheer revenue numbers mean for now it is unlikely to have a significant impact on the growth of public cloud. But according to Gulli, what it does provide is greater choice, so customers have more options when it comes to choosing the right tool for the job.

“There are so many great ways for IT to help achieve the right business outcome,” Gulli says. “It's no longer a case of public cloud versus on-premises, it's about two different technologies complimenting each other to help deliver what their business is trying to achieve.