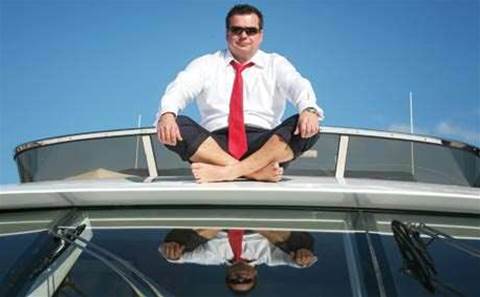 There’s an immediate sense of incongruity one senses hanging out with Australian IT success story Scott Frew atop his boat ‘Thrill Seeker”.

The name is apt enough for the serial and seminal IT entrepreneur notorious for taking risks, and more often than not building his chip stack.

It’s the size of the boat at 75 feet and 50 tonnes (two double and two single bedrooms below, numerous bathrooms, dining room and kitchen) that seems sharply at odds with the self-deprecating larrikin who epitomises the Australian character in life and in business.

Like so many Australian success stories Frew is very much the accidental hero.

An everyday kid growing up in the suburbs of Sydney in the 80s, Frew is adamant his parents “weren’t wealthy”.  His mother was a country girl who grew up near Bathurst in regional NSW, while his father was a Bondi boy who ended up as the advertising / marketing director for a large agriculture business.

Frew lived in Wellington near Dubbo for the first seven years of his life before the family moved to Epping in Sydney’s north west. He identifies very much with being a city kid but stresses his time in the country and his mother’s country girl background instilled in him certain values which he’s adamant helped shaped him as a person and an entrepreneur. “I have the ethics of a country person but I’m a fast mover so I like the city.”

As a school kid Frew was the guy who got on with everyone. Sports was a big interest for him, having played soccer at state level. Academically, it was another story. He recalls being at an industry event recently when a sports celebrity impressed younger members of the audience by declaring he scored in the high 90s in his NSW Higher School Certificate. Taking the stage afterwards he exposed the ruse revealing he managed to score much better with 165. This was of course back when the HSC was out of 500.

Suffice to say, Frew wasn’t destined for the hallowed halls of University. And given his first job was as a used car salesman, it’s probably fair to say his own destiny seemed less than certain in the early days.

Yet despite being a typical 80s kid, always outdoors on his bike getting himself dirty in the era before the allure of screens triggered a national debate about vitamin D levels, Frew found time to indulge his fast consuming passion for all things computing. From messing about with early Basic computer programming , and then on  Commodore 64 he soon discovered his inner geek. “I took to computers like a duck to water.”

By 1985 he had his first programing job. But he quickly realised that sitting for 50 hours a week in front of a green screen would be a means to an end, not a long term proposition. Soon he found himself programming for networks, becoming a deft hand with Novel, and from there landed a sales role. It was on the sales side that Frew started to get an inkling of his destiny. After scoring a commission cheque for $12,000 in the late 80s he bought himself a brand new motorbike.

Seeing the potential in the industry Frew started his first company in 1990, a networks specialist called Micro Networks, which he sold to Netcomm a few years later. Now officially an entrepreneur he embarked on the journey that would change his life.

LAN Systems was one of the first networking distributors in Australia and Frew’s second company hitched itself to the coat tails of the most successful vendor in this space: Cisco.  Frew insists running IT businesses was never about the money for him. “I’m a true entrepreneur in that I want to change stuff. I get bored easily.”

But the first offer he received for LAN Systems in 1998 really sobered him up. He was in his late 30s and potentially worth tens of millions. Not long after eventually selling to US firm Datatec, Frew found himself floating around the Mediterranean. He then settled in Brussels for five years, from where he contributed as a board member with various European tech companies. And he bought Thrill Seeker at a price of around $10 million.

After what he describes as the most important time in his life, Frew decided to come back to Australia with a mission to create the best tech distributor down under.

Distribution Central celebrated its 10th birthday this year, reporting annual revenues of $250 million. The company was formed form the acquisition of a local player with $1.7 million in revenue and just a few staff. One of Frew’s pet projects while ramping up DC was developing better systems for tracking the company’s inventory, ordering and partner relationships.

The result was a software solution called iAsset. With an upfront investment of around $8 million, its launch was, Frew admits, the most afraid he has ever been in his career. But for the man with the Midas touch, it was yet another risk that paid off.

DC is now licensing iAsset to distributors all over the world, including US giant Arrow and is also working on a global licensing deal with VMware. This year Frew anticipates iAsset will generate revenues over around $10 million on its own, with a sharp growth trajectory expected for next year.

Something else that seems to genuinely excite him, is the fact DC has consistently rated highly on BRW’s best Places to Work list. It’s further proof that one of the local IT industry’s most successful entrepreneurs is ultimately a good bloke at heart.

So what’s the secret to Frew’s success?

“Persistence is number one. You’ve got to keep getting up every morning and keep doing it. But most of all you need to be a risk taker. I take risks 100 percent of the time.” Frew also hires well.

“One of my basic philosophies is I employ people who are smarter than me and let them get on with the job.”

“But while they may be smarter, they’re not prepared to take the risk.”

On the subject of arguably his most important job, Frew is his most animated.

While admitting being a husband and a father to two boys has been challenging alongside his fast-paced professional life, he wouldn’t change anything.

Even though his marriage of over 20 years ended in 2011?  On this subject Frew explains how he and his wife simply grew apart to the point where the marriage was no longer “adding value” to his life.

At first it seems like a somewhat cold and calculating way to assess a relationship, let alone one with the mother of your children.

Yet if anything epitomises Frew’s philosophy for life, it’s to only do things where there is likely to be a positive outcome.

And if you’re a betting man, you would happily wager that Frew has a better instinct than most.