Tap into the well of wi-fi opportunities 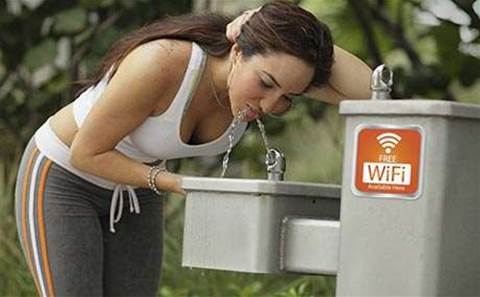 Like local governments throughout Australia, the City of Perth provides its residents and visitors with free essential services – drinking fountains, parks and public toilets. So it’s a testament to the unquenchable thirst for data-hungry mobile applications among Sandgropers that the Western Australian council has added free public wi-fi to that list.

Last November, the Perth local council, home to about 20,000 residents, rolled out free public wi-fi, a $300,000 network blanketing much its CBD. It has a peak speed of 50Mbps, which allows users to roam freely through the city without connecting to hotspots.

This is attractive to the city’s 125,000 workers and especially to visitors from overseas without cellular mobile devices, says the city’s chief information officer, Jonathan Stoate. In March this year, 18,000 devices connected to the Perth wi-fi network, mostly iOS and Android. “For residents and visitors from the greater Perth area it [also] encourages them to come into the city and use the facilities and some of our wonderful parks,” Stoate says. “We noticed you could tell when school holidays finished because of the connections that disappeared from the wi-fi network.”

“Wi-fi and these technologies are largely untapped and there are going to be clever things that people will look to do with this technology.”

One of those early approaches is seeing how analytics encourages the use of council facilities, such as its 118 hectares of public parks and reserves. “People walk around city with their smartphones and we get a vision for who goes where and how people use the resources we have,” he says. “If we’ve got a park that’s not being used, then providing it with wi-fi encourages people to get out into the park at lunchtime to sit and eat their lunch and get on to Facebook or whatever platform that they’re after.”

Perth has experience in offering free public services in order to lift economic activity. For years, it has run free buses around the city centre to encourage workers and visitors to shop and do business –  wi-fi could fill a similar role, says Andrew Ratcliff, director of networking solutions provider Matrix CNI.

“It’s a great thing for general commerce and gives people a reason to come into the CBD and stay,” Ratcliff says. “Tourists can roam around the city to see the top attractions and stay connected to the net and their daily lives. I can’t see a downside for any local council and it would be a boon for merchants.”

Chris Evans, southern region sales manager at Ruckus, says there’s a “massive” interest in wi-fi from councils. Brisbane, Adelaide and Melbourne are at varying stages of their rollouts. “There’s a little bit of ‘trying to keep up with the Joneses’, but they are starting to see it as an essential service for their own communities and also for tourists,” Evans says.

And while wi-fi isn’t the quite the stuff of life, it may not be far behind: “Councils deploying wi-fi in streets almost like lighting tell me wi-fi is becoming more important.”

On for young and old

Retirement villages are also exploding in their use of wi-fi, says Jean Morel, general manager of community broadband provider BigAir. Time-rich retirees see it as essential for continuing education and staying in contact with family and friends.

Free wi-fi also helps to keep the grandkids occupied when they come to visit.

“People who are retired are very well represented in terms of online activity,” Morel says. “There’s definitely massive growth there.”

BigAir has rolled out to two retirement villages and has another 70 in the pipeline.

Similarly, he says universities are expanding wi-fi networks in residential accommodation: “All of them have wi-fi and all want more of it, and wherever we go back to retrofit, it’s standard to have a ubiquitous wireless overlay.” (See box below.)

Wi-fi use is expanding in terms of speed and density as well as reach. Some wi-fi networks installed just three years ago to cater for light web browsing and email are already buckling under the strain of video and social media. Networks may need to be upgraded from 802.11b, 802.11g or 802.11n protocols to the newer 802.11ac standard. And more access points and analytics should be added to keep pace.

Changes in how aged-care facilities report costs is leading to a push for transparency in communications pricing, he says. And wi-fi is also being used to carry patient information. Guests can even log in to the wi-fi network by checking in on Facebook, he says.

“There’s a lot of sensitivity around patient records that transit this network,” Couchman says. “So we put a solution together that creates a virtual private network from the access point to the data centre for all guests and resident traffic, so it’s completely separate from their corporate users.”

Couchman says the Meraki-Cisco hardware Azzurri offers has quality assurance to ensure a Skype or Facetime call doesn’t lag or drop out. For Azzurri, wi-fi enables the provision of other services such as security and consulting.

Azzurri provides a single management console for its clients where they can keep an eye on security, voice service quality and billing, and view the network topography as tiles.

In the next 12 to 18 months, Couchman sees a showdown looming between Microsoft with its Skype and Lync platforms, and Google’s Hangouts.

“Microsoft still has the lead because most corporates are Microsoft houses,” Couchman says. “But Google makes Hangouts easy so you can sit in your office with your Polycom or Tandberg and have your CEO at home with Chrome. That’s been a problem with videoconferencing for a long time.”

“That’s where it starts to fall down. All the technology works beautifully in the office but the second you step outside the door it comes down to coverage. That would be the end of the desk telephone because why wouldn’t you have Skype on your phone?”