The channel opportunity in modern collaboration 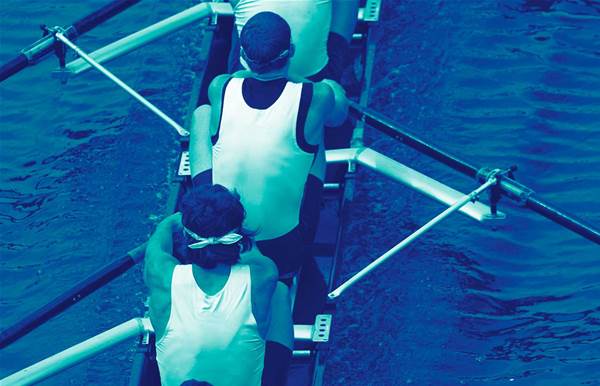 While workplace collaboration technology has come along way since the days of Lotus Notes and grainy boardroom-based video conferencing systems, the fact that the Melbourne to Sydney air corridor remains the second busiest in the world clearly shows the technology hasn’t yet quite fulfilled its promise.

But regardless of the remaining shortcomings of remote collaboration tools, they have not proven sufficient to prevent a wide range of organisations from adopting geographically disparate team structures. The shift to agile working methods has also helped fuel a renaissance in remote collaboration technology and created a willing market for newer entrants, such as Slack.

Collaboration is becoming a mainstream aspect of business, and that creates a huge opportunity for the channel. And it’s not just the ‘remote’ part of the collaboration market that is growing.

“What we are seeing is more companies investing in this collaborative technology for their offices,” says Ben Johnson, general manager of marketing and strategy for Dicker Data. “So where in the past they may have just been buying licenses to use on a single device, they are now doing away with whiteboards and bringing in the Microsoft Surface Hub style screens.

“This is all part of the digital transformation of businesses across Australia, and it is not just transforming processing, it is transforming the way that we meet and work together.”

Dicker Data counts a number of prominent collaboration tool vendors on its books, including Citrix, Microsoft and Cisco, all of whom have retooled their collaboration suites recently to better suit client requirements.

Johnson says the partners that are proving most successful in selling these tools are the ones moving beyond the idea of collaboration being just a product that has one feature. One example is demonstrated by Citrix partners, who are using its Content Collaboration Suite as the basis for powerful but easy-to-use collaboration systems.

“We see Citrix Content Collaboration basically being the aggregation tool that allows our partners to leverage their technology platform of choice through a simplified user interface,” Johnson says.

In recent years, the collaboration market has been disrupted by a clutch of consumer-oriented tools, many of which are initially available free of charge. Skype was an early example, and numerous others have emerged, including Dropbox for file sharing and Google Hangouts for videoconferencing.

Dropbox is now capitalising on its virus-like spread throughout organisations by converting users to Dropbox Business, which adds advanced security and management features.

Sydney-based MSP XCentral was one of the first Australian companies to take Dropbox Business to market. While the company also has a strong practice around Microsoft collaboration tools, such as SharePoint, XCentral’s sales and marketing director Angus Mansfield says Dropbox fills a need for a robust cloud-based file server solution for organisations with large files, such as media companies or architectural firms.

“Consumers relied on Dropbox and we thought it might be a good solution for our customers,” Mansfield says. “How it handles those large files, with some of the synchronisation technologies, we find to be particularly powerful.”

“People are definitely wanting smarter ways of working, both within their organisation but also out to their customers,” Mansfield says. “And things like notifiable data breach regulations are driving people to ask more sophisticated questions about modern working and how that ties in with security,”

The emergence of consumer tools in the enterprise is exemplified by Facebook, which in 2016 launched Facebook At Work, an enterprise version of its platform. Subsequently rebranded as Workplace, the tool offers a familiar user interface with a focus on groups, chat and video calls, but without advertising.

For Daragh McGrath, the chance to bring Facebook into an enterprise environment was too compelling to ignore, so 18 months ago he and his colleagues Mark Wyman and Dave Nixon (all former employees of Cloud Sherpas) started Enablo as a pure-play Workplace partner.

McGrath says he always had a strong interest in bringing consumer technology to the enterprise – as did many of his customers.

“We saw Facebook coming to market with Workplace, and in the years selling and implementing and delivering Google solutions, that was the Holy Grail,” McGrath says. “We were knocking on Facebook’s door for six months before we officially got stated.”

He says the strength of the product is firmly grounded in its familiarity.

“There are over two billion people around the world using Facebook in their personal lives on a regular basis, and we get to bring the power of that familiarity into the enterprise,” McGrath says. “And we see adoption levels with Workplace that are frankly astounding. With the power and the familiarity of the platform we see rates far in excess of anything else the market is seeing today.”

While Facebook aims to see adoption rates of 80 per cent, McGrath says he is consistently seeing usage top 90 per cent of the workforce. That is a remarkable number, given many of the users are frontline workers, such as bank tellers and sales staff, who previously never even had a corporate email account.

Workplace has undergone rapid uptake in Australia, and clients include Bunnings, AMP, Coca Cola Amatil, Energy Australia, Macquarie Bank and Service NSW – many of which are also Enablo clients.

“We’re a young business, but we are ahead of where we would have expected to be 18 months into our journey,” McGrath says. “We have a strong, solid base in ANZ and we want to continue to solidify that. But it is also time for us to consider expanding into new markets and offering new platforms and solutions.”

While consumer tools are disrupting the enterprise market, they are also driving vendors and partners to think seriously about how easy their tools are to use, and how well they support business processes.

At West Unified Communications, that thinking has resulted in its customer success team becoming a critical, growing component of its Cisco-based collaboration practice.

“Organisations are still afraid of change, so we take a change management approach to deploying the tools, as opposed to just dumping another piece of technology on desktops and then walking away,” says Ashley Merrilees, West UC’s APAC customer success and training manager.

“All people expect that the technology works. They just want to get into a meeting and get their work done. They want a simple, easy intuitive tool. And they want to understand how the tools improve their day to day activities.”

Once business outcomes are defined, a comprehensive training, communications and content plan is created, with metrics embedded to monitor adoption.

The general manager of Dimension Data’s Digital Workplace Business Unit, Ed Phillips, says that clients are much more interested in getting ongoing value out of collaboration, and evolving it.

“Right now, what we are trying to do is make sure that whether you are operating as an individual in a remote location or whether you are in a virtual team, you actually have the same experience and you can seamlessly integrate and move between those experiences,” Phillips says.

For the Dimension Data’s clients, the ease-of-use mantra has resulted in a push to incorporate collaboration technology more directly into business processes. Dimension Data recently developed its own proof-of-concept, in the form of a case management system that embeds Cisco’s WebEx at its heart. It enables staff to get up to speed with customer information faster than previously possible.

Phillips says the same concept could be introduced in information-rich collaboration scenarios, such as those involving medical consulting and research.

“You want to bring people together to collaborate, you want to improve their experience, but you also want to improve business performance,” Phillips says. “So if you make it much more seamless and frictionless for the end user you are also reducing lost productivity.”

Phillips says this approach often involves journey-mapping, to properly understand the business process that the collaboration system is supporting.

“To come up with those use cases we have had to become more industry literate,” Phillips says. “It certainly isn’t technology-driven thinking. You need to understand the business and the process that you are trying to automate or improve.”