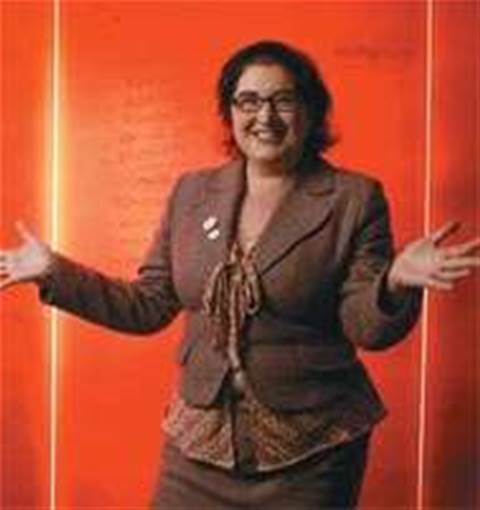 “You’ve come a long way, baby.” That’s one thing you might say to WDG government business development manager Rita Arrigo after listening to her resume. That’s what they used to say last century, when the second wave of feminism confirmed the alarming proposition that women could work outside their traditional domestic sphere.

Arrigo isn’t of that generation. She’s in her late 30s. She has arguably got a longer road to travel yet. But unlike many who have achieved and learned so much, Arrigo has retained an irrepressible enthusiasm, the glee of a kid in a candy shop who has lots to experience.

Today, she works with Melbourne .NET specialist WDG. But she didn’t do much in the way of computing at school -- well, not that you could do a lot with it at school in those days anyway.

At university, she read for a degree in industrial engineering and computing.
That was the first hint of the route she might take -- a road less travelled indeed, that has taken in roles as a radio broadcaster, channel sales staffer and internet cafe operator.

“I am passionate about the benefits of technology,” she says on her blog. Doubt it not a bit. The passion oozes from every pore. Arrigo still feels a thrill from her work that must bring her success when promoting the greyer worlds of .NET and government IT. She has few, if any, regrets and reckons her current job is the best so far. “WDG is empowering. It’s a small business, where we can actually deliver real services to people,” Arrigo says. “I find that exciting.” That contrasts with Telstra, where she worked for BigPond’s channel, which she says meant being literally hamstrung by “bazillions” of acronyms and “doing everything backwards” in the way of big corporations everywhere.

“Over the next two years is when the web gets really serious. Don’t you think so?” Arrigo says. She predicts “massive investment” in wireless and business-to-business application consolidation, all driven by web services. The ROI is really happening, she says.

Web services and applications are moving inexorably towards what Arrigo calls a “totally customer approach” to software. She says it is about communities working together to develop and deploy different tools. Instead of customising every application, users will take some technology from one place and some more from somewhere else and integrate all the elements. A bit like with service oriented architecture (SOA), web services and CRM, she says.

She is currently working on two really exciting projects. “One of them is this whole SOA process we’re establishing, which is really about helping organisations unlock their legacy data and being able to make use of it. And the other aspect is developing a range of hosting solutions where people can cost-effectively deploy their applications. But the other one is confidential at the moment,” she says.

These trends are not only making it easier to deploy applications, but providing a vision for the future, especially for organisations like WDG that have come from the web but are now moving into delivering critical applications and robust platforms, Arrigo says.

“I find the developers out the back awesome. They’re very innovative,” she says.

“It’s not about how can we rip this customer off but how can we be creative and give people what they want. And I find that is often not a priority in an application development environment.” If there’s one thing that has been a constant theme on Arrigo’s road, it is looking for new ways to help people. It also has to be fun.

“When I worked at Telstra, it was a really exciting time to be at Telstra. It was the time of the boom of the whole internet thing,” she says.

Arrigo says there was heavy investment around lots of potential IP services. "The driver for me is always about being on the edge. And being around stuff that is still in the early adopter stage and taking it to maturity. Then I want to do something new and exciting," she says.

If you’re not living on the edge, they say, you’re taking up too much space. Which, she concedes, could well be why she moved from industrial engineering in the first place.

“I had done work experience at Kodak and had a little stopwatch and I had to watch these people fill those bottles of process chemicals and photography reagents,” she says.

Arrigo implies she found some of the daily grind of industrial engineering -- focusing on business processes in detail to develop more efficient practices -- somewhat boring. Yet the things she learnt have been of inestimable value. The tenets of business process design are useful across multiple industries, not just in manufacturing.

“I think that has helped me, when you run around saying you want to make a difference in such-and-such an area,” Arrigo says.

If you are not disciplined, that does make it harder to become accomplished at any serious endeavour.

Arrigo sees her industrial engineering training as having helped her develop the ability to back up creativity, ideas and individuality with rigour, “with process and discipline and old-fashioned tools”.She says the industrial engineering of the late 1980s was all about increasing productivity on the factory floor, business process re-engineering and the “just-in-time” practices that have since become so influential in the supply chain.

But her training also included some computing knowledge so she chose a PC support role for her first job. “I worked for a management guru who used to ring me up and ask how to change a directory in DOS! So that was very interesting, but I didn’t last long in PC support because I was adopted by those people who would come and visit me and sell me all the stuff,” Arrigo says.

She applied for a job with HP reseller AMS in 1998, which later became Prion. That was run by the Brackin brothers, including Volante’s Allen Brackin.

Arrigo built up a dealer channel for them. Then she worked for a Toshiba wholesaler. “Once you’re in the market and know who all the resellers are, people want to keep employing you but it was getting very boring,” she says. “So I went back to uni and did a graduate diploma in marketing and ended up acquiring a job at another Compaq reseller.”

In 1995, Arrigo told a cafe owner acquaintance about an ICQ conversation she had just had with her older brother, Frank Arrigo, who was in Seattle at the time. “My brother was saying: ‘They’ve got internet cafes here’. And he goes, ‘they’re really groovy’. And I was talking to this cafe owner and he goes: ‘Oh, my God, will you build me one?’,” she recalls.

The cafe owner later fronted up to her with $10,000 in cash in his pocket and ordered her to build him one. She installed the internet and did the hardware setup for the cafe -- soon renamed Netcafe -- in trendy Acland Street in St Kilda.

It was the first internet cafe in Melbourne, she says. Routing and ports were quite expensive then. "To do it without having six telephone lines from Telstra, you’d use a Linux server," Arrigo says. Netcafe soon attracted all kinds of attention, from the public, wannabe techo types and the news media. Channel Seven’s Healthy, Wealthy and Wise show came out to do a story on it.

Sadly, after an initial flurry of interest, Netcafe was closed down after about a year. It had cost $6 to surf the internet for half an hour. Meanwhile, more internet cafes opened, libraries started to supply internet access and companies like VicNet got established.

What did keep things going for a while, Arrigo says, was using the cafe to offer an internet training course, teaching what chat, URLs and bulletin boards were -- “things like that”. “It was actually not easy for the cafe owner,” she says. “And he probably didn’t make the million dollars he wanted to make, and ended up closing the shop. But it was very exciting times.” Arrigo says a whole movement began to give people access to computer-based information. Even government, particularly the states, started investing and supporting the promised internet boom.

There was a backlash. Some people feared whole generations would never leave their houses, having become “addicted” to the new technology. But Australia escaped much of that, according to Arrigo.

“We have this kind of environment where people always argue with new technology,” she says. “No-one would let their kids stay on the internet in their room in Australia, I don’t think.”

However, Arrigo discovered it was different in Singapore, where she went to work for NCS. “In Singapore, I noticed how tragic a lot of use was. Some people used the internet to the extent where they forgot about normal other parts of life,” she says.

Excessive use aside, Arrigo considers a major part of her role has always been fighting Luddism in the ranks. She realised she is galvanised by the chance to teach people about technology and its benefits. “I was more about people overcoming the fear of machines,” she says.

Arrigo says she was rattled by older people who didn’t like technology. “They would say, ‘What’s the benefit of that? How is it going to help me?’ There really was a feeling technology wasn’t that great. I think techno-fear is probably still a problem. Not in our industry, but in the community around us,” she says.

She likes to compare Australia’s facility with IT, though, with places like the US. “US had a terrible mobile network and they launched this poor little mobile thing that would only work in New York and were getting really excited about it,” Arrigo says. “People bag Telstra and Optus but we’re a lot luckier in our telco services than the US.” Arrigo’s experience is diverse.

Melbourne radio station 3RRR still has a show called Byte Into It, designed to demystify IT, that Arrigo started years ago. It earned her the nickname “Digital Diva” and helped inspire geekgirl.com.au to list her as one of their Women in IT Role Models.

She even met Bill Gates once, on a visit to her brother Frank in the US, who still works for Microsoft in a .NET role. “[Frank] invited me to an executive briefing and he was there,” she says. “I got to meet Bill. I thought he was great!” Gates, she says, struck her as something of a visionary. “But you don’t want to say that to too many people. They might canonise him!,” she laughs. “I still think he should give more of his money away.”
Multi page
Got a news tip for our journalists? Share it with us anonymously here.

Mitigate tech risk in your business
By Fleur Doidge